7 Things You Need to Know About Women

Finally, a justification for all the mistakes you thought you made.

Not only are they ugly, they're also expensive, stupid, and messy. They're also a sign of weakness. Any man who gives a woman flowers is immediately sending her the message, "I am easily controlled." The best way to show a woman you like her is by buying her a cold burrito from the nearest street market. Nothing says "I love you" like a cold beef and bean burrito.

Rule #2: Women like men who do interesting things with their body hair.

There is nothing more impressive than a guy who can grow his nose hairs out so long that he is able to braid, extend, and superglue them across his upper-lip so they resemble an exotic mustache. If a guy can do that, imagine what else he can do….

Rule #3: Women like men who refuse to cook, clean, or do yard work.

Strong and assertive men know what they want to do and when they want to do it… and most of the time it doesn't involve cooking, cleaning, or yard work. The next time your girlfriend or wife asks you to do any of these activities, just tell her, "I'm sorry honey, but I just don't feel like doing any of those things right now. I'm tired from drinking beer last night. Also, can you please move out of the way…the Playboy channel is showing my favorite special, "College Girls Who Earn Tuition Money By Doing Naughty Things."

Assert your independence and show her that you are a strong-willed man who refuses to be bossed around.

Rule #4: Women like men who maintain a healthy interest in the opposite sex. 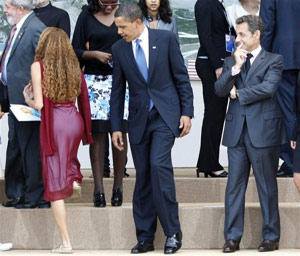 There's a reason he's the most powerful man in the world: STARING. LOTS AND LOTS OF BLATANT INTEREST. Be open and honest with your girlfriend or wife about your continued and generalized interest in the opposite sex. (After all, what woman wants to be with a guy who never gets aroused… right?) Stare at every scantily clad woman who walks by, talk to your girlfriend about how hot her sister is… and for God's sake, just be honest with your girlfriend and tell her you went to the strip club because you were horny and she was too busy shopping.

Whatever happens, you don't want your significant other to become bored with you, so KEEP HER GUESSING.

Rule #5: Women like strong, impulsive men who do and say whatever they want despite social circumstances.

The last thing any woman wants is a timid man who doesn't know how to take charge or express himself. No matter what social circumstance you find yourself in, whether it's in church or even a picnic with the in-laws, live moment by moment and do or say whatever you want.

If you're having a family picnic with grandma, grandpa, the in-laws, cousins, uncles, aunts, and maybe even some of the pastors, priests, or ministers who are part of your family… and if you've already had too many beers because you started drinking immediately after the church sermon at 10:30 in the morning…there is still no reason to refrain from talking about the perverted sexual orgies and internet scandals you often found yourself involved in during your wildest times at college while you were hyped up on grass, tequila, and PCP. (Don't worry about the pastors and ministers in your family, they will find your descriptions both colorful and entertaining.)

….like the time you decided to abstain from society and prove your manliness and freedom by living in a green army tent outside of a gas station while eating your own boogers, farting whenever you wanted to, and picking fights with weak, defenseless, and often quite surprised gas station customers.

…or the time you refused to lose money on a bet (or back down in front of your friends) so you went ahead and ruthlessly sodomized that poor defenseless raccoon who got stuck in between the split trunk of the tree in front of the city administration building.

And if you find that you suddenly have to urinate after you've told your entire extended family about the interesting life you've lived… show everyone that you're the kind of guy who isn't going to compromise because of a little thing like distance to the nearest bathroom… and PEE IN YOUR PANTS.

So remember, if your wife or girlfriend gets really upset about something like this and divorces or breaks up with you, know that IT'S NOT YOU, IT'S HER. She's the one who isn't strong enough to be with an adventurous, impulsive, and strong-willed man like you. 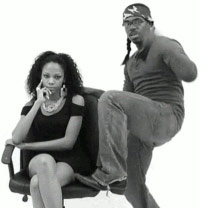 Women may pretend that they are uncomfortable, horrified, and disgusted when you point at them, grunt, and then start making suggestive thrusting motions with your pelvis… but deep down they really like it. (Don't allow yourself to be fooled when they call the police on you… that's just part of the game they're playing to see if you're still brave enough to pursue them.)

They might look at you as though you are a mentally insane, crude, uncivilized, and hopelessly retarded pig… but behind that look of sheer terror and repulsion is a soft and yearning heart that says:

"I really like that guy. Gosh, he is so cute…making those dead sexy thrusting motions with his pelvis…with his beat-red face, his crossed eyes, and that big line of drool hanging from his chin. I wish my boyfriend was more like him. How does my hair look? Did I put my make-up on this morning? Hmmmm, should I give him my number? I wonder if he would call me back. Nah, a guy like that probably has too many things going on in his life to pay attention to little ole me. Either way, I'll definitely be thinking about him later on tonight."

So remember, even though you may be in the back seat of a car heading to the nearest police station, that woman will definitely remember you and will probably be talking about you for a very long time.

Rule #7: Women are more interested in resourcefulness than fashion.

Women often like to pretend they are interested in guys who have good taste in clothing and who know how to dress well, but I know the truth. What they really like are guys who are resourceful, especially when it comes to refusing to spend money on new clothes.

I once made the mistake of inciting such incredibly unstoppable desire in another woman by telling her the sad tale of my 14-year-old khakis. I had purchased the khakis on the cool, temperate evening of August 13th, 1997 in the city of LaCrosse, Wisconsin…and they had survived until the unfortunate, cool, brisk morning of April 7th, 2008 in the city of Changwon, South Korea.

The khakis had many rips, holes, and fermented cabbage stains on them, but I refused to throw them away because I had paid $35 for them back in 1997, and I was bound to get my money's worth. I wore those khakis every weekend (despite their deteriorating condition) until finally the front zipper fell off and I was forced by cruel fate to spend money on a new pair.

When this woman heard the story of my endearing financial resourcefulness in terms of my refusal to abandon my 14-year-old, La Crosse-purchased, fermented cabbage-stained, zipperless khakis for a new pair of $35 khakis, she looked at me with glazed and dreamy eyes, and the expression on her face undoubtedly betrayed her passionate, new-found, uncontrollable, lustful desire for me and my unwavering resourcefulness.

And I got myself in even more trouble by telling her that I had once owned a very frail Chinese-made belt, which I had purchased in China for 25 American dollars from a young female scam artist who also offered me free sex if I purchased a second belt for the same price. Nonetheless, I kept this belt for 4 months despite the fact that the inner-lining had become so completely unraveled that it often appeared as if I was wearing two belts. I refused to throw away the belt and buy a new one until the belt buckle actually fell off and landed in the Korean urinal that I had currently been expelling a tremendous and embarrassing amount of urine into (due to the previous night's drinking activities).

After telling her that story, I could see that she wanted to have my babies.

I made the final mistake when I told her about the two shirts I owned when I was in 7th grade. I owned a red shirt and a blue shirt, neither of which had any designs or logos. I could have enhanced my fashionable apparel by purchasing a green shirt, but I decided to be financially responsible by not spending any of my allowance money. I would wear the blue shirt one day, and the red shirt the next day. Sometimes, to throw people off, I would wear the red shirt two days in a row. (I was both financially responsible and unpredictable… very impressive qualities for a 7th grader, wouldn't you agree?)

Well, that was it!!! After I told her that story, her uncontrollable, passionate, and lustful desire for me and my resourcefulness grew completely out of control and reached an intense, dangerous, and psychotic level of irreversible craving. She began stalking me, and I was forced to move.

So remember, don't tell women how cheap you are unless you are fully prepared to encounter the psychotic lustful desire that your resourcefulness may inspire in them.

Continue to “7 MORE Things You Need to Know About Women” »