Mistresses of Satan, aka Women

Dating is Hell, literally. Here's how it all goes down(hill).

Women. What do you think when you hear this five-letter word? Do you think of the word "wife"? "Girlfriend"? "Poison-filled cobra"? "Demon bitch from hell"? "Lover"? Yes, all of those words are synonymous with the word "woman." A woman is like hydrogen: very complex and composed of many different elements. Sure, she's your sweetheart, but at the same time she'd rip out your heart with her claws and use your aorta as dental floss. She may be as beautiful as a jewel-encrusted diamond, but on the inside, she's as ugly as the elephant man swimming in a big fucking puddle of diarrhea.

From the second we see a woman we're attracted to, we do not look at the woman as a whole, but rather in parts. Parts as in, mainly the ass and breasts. And yes, they do have a thing called a "face." We as men do not say to ourselves, "Oh, she might be a nice person to spend the rest of my life with." Instead we say, "Damn look at that ass on her, I'm going to go approach her." That's how they lure us men into what is a long road of lies, hot sex, drunkenness, backstabbing, and eventually, the theft of our hearts and their incineration. Certain men survive after the final stage, letting the soul of the heart rise again like the mighty mythical phoenix. When we first approach them, they get a glimmer in their eyes, one of beauty. However, deep down, the glimmer of beauty is lit by the souls of the other men she has been so cold-heartedly destroying in her Satan-given task to render the male species extinct.

Everything you do must revolve around this abomination with vaginal walls, otherwise she'll use her superpower: bitching.Our first words to them are but simple words: "Hey what's up?" Or "Yo slut." Consider your fate (and possibly coffin) sealed as soon as you say those words. You might as well try to hug a being composed of molten lava—trust me, it's just as safe. Okay, so you engage in lengthy conversations, bullshitting about such topics as: hobbies, jobs, movies, penis size, fun, etc. Then maybe "you" buy "her" something to eat or drink. When it becomes obvious she has an interest in you, the gates to your heart and soul open for her sinister, despicable, venomous soul to manifest itself. The end is near….

Then the first date happens, or as I call it the beginning of the end. So, you pick up your ravenous, bloody-fanged whore of a date with whatever shitmobile or gaudy, sparkly, scratch-less new whip you got. You get out of your car and walk up to her house, also known as the bottomless flaming pits of Hell. She's inside, waiting for you, thinking, "I can't wait until I drain him both financially and emotionally." And you're outside thinking, "I can't wait until I drill her both orally, vaginally, and anally." Deep down inside, you're both aware of each other's agendas, but that's overshadowed by what goals you both want to achieve in this relationship. 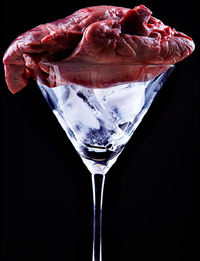 "Umm, yes, she'll have my heart, chilled, dragged through the rocks. And make it extra bloody."You open the gate to the bottomless flaming pit of hell, and there she is, a succubus with claws, fangs, wings, and fiery hair, and damn she's ready to drag you through every pillar and stone in Hell. You both embrace and surprisingly you do not spontaneously combust from the flames that consume what's left of her soul. Then, you drive off together to the restaurant. Once the two of you arrive, you order linguini and clams and some red wine. Little do you know, as she gnaws down the linguini and clams with her bloodthirsty fangs, the bitch is envisioning that she's dining on your bowels (linguini) and your testicles (the clams). Believe me, the fucking Lilith could eviscerate you with just one tooth and annihilate your balls with one slight chomp.

So, you two continue discussing nonsensical bullshit and all you're thinking to yourself is, "I can't wait for my semen to flood her esophagus and digestive tract." (Or at least that's what I usually think of when I'm on a date.) And she's thinking, "I can't wait to evaporate his soul and the contents of his bank account." After the date, you, being the knight in shining armor, pay the entire bill. Little do you know, she's salivating because now (if she decides to stay with you) you'll officially pay for every fucking thing in future dates. If you have reached this stage, grab the nearest hook sword, dip it in holy water, and use it immediately on the bitch. You poor fucking bastard, you're probably blinded by the fact that women have the supernatural ability to suck the life entirely out of your wallet (rendering it weak and empty) and transfer all of its contents into the cash registers of any store they enter. Yes, that is one of the many evil black magic powers women possess.

The date concludes, and you decide to drive the man-eating dragon home. She manipulates your feelings by saying, "Oh you're so wonderful, I had a great time." This way she'll keep luring you, date after date, until you finally ask her to be your girl, and when that happens, you might as well OD on Tylenol because your life is officially meaningless. From that day forward, everything you do and say must revolve around this abomination with vaginal walls, otherwise she'll use her other superpower: emitting sounds from her vocal cords until your eardrums are cataclysmically destroyed—also known as excessive bitching. No normal man can combat bitching because it's the most indestructible weapon in a woman's arsenal.

If the date's over, she may let you inside her lair, which of course you are more than willing to enter because now you will complete your objective of vaginal invasion. Being the feeling-devoid whore that she is, she'll allow it knowing you're hers, and that she has a slave who will obey her every command, because not listening = no pussy.

Men, once you've reached that step, your soul is officially her property, along with everything you own. Every Washington, Lincoln, Hamilton, Jackson, and Benjamin you work for. Every penny and Sacajawea coin you earn is hers. That is the price to pay. If there is no second date then consider your soul and self-worth still intact and fully functional. However, consider your feelings and self-esteem nuked. (You poor pussy.) Either way, you'll wind up feeling like ass droppings.

But, men rejoice! There are beings out there who have the natural ability to counteract every strategy and magic trick women use. These beings were created and trained by GOD himself to combat the evil and put in checkmate these festering Lilliths. These holy beings are called players (or playaz). A player, with his angelic powers, will use women and fool them into thinking they are loved, that they're the "only one." Nine times out of ten, the player's angelic powers will render the demonic powers of a woman null and void. These players are hailed to men everywhere as heroes, warriors, and golden sages who set right the wrongs that the woman has made.

In conclusion, men cannot survive without women and vice versa. If you want to avoid all the terror, then don't date. On the other hand, just stick with hookers and strippers, there's no emotional involvement there. But oh yeah they take your money too. Just do the whole rape thing, at least you're in control of that, you know?