7 Things Every Classic Bowling Alley Should Have

Besides a maintenance man straight out of a Stephen King book.

Perhaps the most crucial part of a classic bowling alley is that its décor has remained unchanged from Carson to Leno to Conan and back to Leno again. Chances are you can find a picture of your parents at the bowling alley before you were born and it will look exactly the same, only slightly more ragged because of the photo quality. Your dad's massive mustache and bell bottoms might have gone out of style but that classic 70's bowling alley look continues to stand the test of time. Or at least, continue standing somehow.

2. A Foul Yet Pleasant Smell 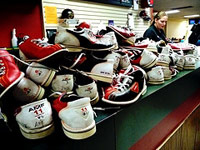 The words "festering" and "nostalgic" come to mind simultaneously.It's not a bowling alley if it doesn't smell like a vaguely intriguing fart. There's something oddly comforting about the aroma of aerosol disinfectant spray and second hand smoke mixed together. It says, "You can never have enough air pollution, as long as some toxins are fighting others." No matter where you go in the building, you should always smell the faint aroma of used shoes and athlete's foot in the distance. When you leave the bowling alley people should tell you "You smell like a bowling alley," and your girlfriend should incorrectly accuse you of going to a strip club. 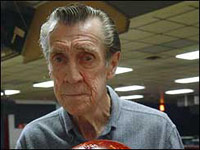 Maybe Wrinkles is attracted to the unwavering smoothness of a bowling ball.Every bowling alley has a group of old Republicans with bad combovers. They chain smoke, drink pitchers of beer, and sneak liquor onto the premises in old military flasks. They will casually and way too loudly say things that sound offensive to anyone born after 1955.  Conversation topics include "blacks," who got the most women in 1952, Moose Lodges, and "that damned techno-whatever." Preferably, these old guys should have cool names like Stan and E.Z., take league matches way too seriously, and have socks for calves.

The concession stand will be run by a lady who looks like she could be your grandma, only with a partial goatee that you can't seem to avoid looking at. All of the food on the menu will be fried and all of it will be unsurprisingly nasty. The most popular items will be cheese fries, cheap bottles of Miller High Life, and burnt coffee. You know it's not a sport if you can eat cheese fries during the action. 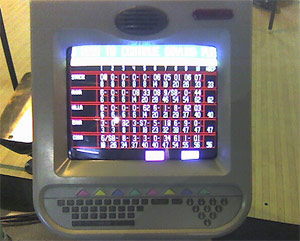 If you throw enough gutter balls, it will automatically switch to Snake mode.The scoring system will look like a giant Atari game from the 80's. It will malfunction after every five bowls, and there will be an obviously inoperable intercom button that you can't help but press anyway, just in case it connects back in time to your 19-year-old father, so you could ask him if it's always malfunctioned like this or not. The touchpad computer keyboard will have letters and numbers worn away from decades of use, rendering the machine basically useless, except for spreading the flu and devising shitty nicknames for your friends. There will also be a giant tube television with the scores on it barely still hanging from the ceiling; every time you reach for a handful of cheese fries you will worry about it falling and killing you. The bowling alley hasn't carried insurance for 35 years so it's always one screw away from being shut down. 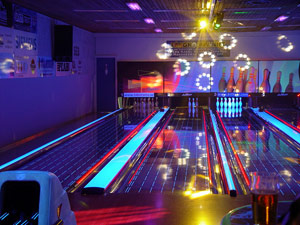 Bowling never was distracting enough.Disco Night might have gone out of style in the 70's, but like the alley's décor, it remains a steadfast fixture. Just one night a week (usually Friday or Saturday) they turn down the lights, crank up the funkadelic, set the strobe lights to pulse, and spin the disco ball. While Disco Night brings in the most business, it also looks eerily like a pedophile meet and greet, with creepy middle-age weirdos, drunk/high teenagers, and little kids at birthday parties all fingering giant neon balls at the same time (the former often using the shocker). Despite this, parents will always consider bowling alleys to be "good clean fun."

7. People Who Take Their Big Lebowski Obsession Too Far

Everyone loves The Big Lebowski, but some love it too much. These people dress in bathrobes, drink white Russians and MGD's all day, smoke pot on the drive to the alley, and use the term "dude" to death. After every roll they'll shout "OVER THE LINE!! MARK IT ZERO!!" They dress like The Dude, Walter, and Donny, and never break character. These people must have learned method acting from DeNiro, unfortunately, they don't have the wit of Jeff Bridges or John Goodman and are far too drunk to bowl a decent game.

Related
I Don’t Know If I Should Start Watching Game of Thrones, Or If I Should Let George R.R. Martin Out of This Chokehold
Ram Ray
A Sweet Sixteen of Things More Likely to Happen to You Than Picking a Perfect March Madness Bracket
Jen Freymond
7 MORE Things Your Guidance Counselor Isn’t Going to Tell You in High School
Wesley Jansen
Resources

I Would Be the Best Writer in the World but Oops, My Pencil Broke
Audrey Clark
This Town Ain’t Big Enough for the Both of Us
Graeme Carey
An Open Letter to People Who Hold Up Their Middle Finger in Instagram Photos
Robert Criss
Your Ego’s Writing Checks Your Body Can’t Cash! That’s Why You’re the Perfect Candidate for Our Top Gun Overdraft Protection Program
Doug Kolic