It's a Right-Hander's World, I'm Just Living in It

As a left-hander, nothing was made to go your way.

For my entire life, I've been left-handed. Well, there were a few years there where really all I did was sleep, cry, puke, and sit in a diaper of my own filth. But enough about my early 20's. Growing up left-handed, you're often subjected to the shame and mockery you would expect: people stare, people point. Little kids look at you and start screaming for their mothers. Okay, maybe I'm being slightly dramatic, but as a left-handed person, there is a definite difference in lifestyle than I imagine right-handed people experience. In ancient times, being a southpaw was a sign of the devil. You were considered evil or demonic—which is true for me, but you can't generalize it for other left-handers too.

Have you ever seen a left-handed person try to use a pair of scissors? It was the reason I first said "fuck" as a kid. When I was in kindergarten learning how to write, my mother was asked by the school if she wanted them to "make" me right-handed. As a left-hander herself, she declined. Don't let the lack of parental consent fool you though, it didn't stop them. I was encouraged to do as much as I could with my right side, and as I result, I'm ambidextrous. (Ambidextrous means you can masturbate with both hands.) I write with my left, throw with my right. I eat with my left, cut with my right. I use my computer mouse with my left hand, but brush my teeth with my right. On the bright side, if I ever have a stroke and lose all feeling on one side of my body, I'm set.

Think about it, though: everything in this world is designed for right-handers: computer mice, keyboards, cameras, watches, can openers, notebooks, scissors. Have you ever seen a left-handed person try to use a pair of scissors? It's painful and difficult to witness, much like watching Melissa Joan Hart try to act. It was also the reason I first said "fuck" as a kid. Power tools and firearms are biased as well—that's why most murderers are right-handed…not because there's a difference in the brain or because lefties are more morally opposed, it's just really fucking hard for us to shoot a gun accurately. And driving in America, where everything in the car is on the right side? It's discriminatory and unfair. At least, that's what I told the judge after I hit that family of four.

By far, the biggest pain in the ass though are spiral notebooks. Or just writing in general. My sister likes to tell me I look like a velociraptor when I write. Do you realize how difficult it is to write, not smudge your words, AND not get ink all over your hand when you're a lefty? You have to keep your hand arched at an angle while simultaneously lifting it off the page. It's harder to figure out a good way to write left-handed than it is for Melissa Joan Hart to realistically emote on screen.

Some of you are probably asking yourself why I'm writing an entire column about being left-handed. Some of you are also probably asking yourself what I have against Melissa Joan Hart. The majority of you, however, are probably asking yourself, blah blah blah where are your tits? Well, to answer your questions: A) Mostly because I think it's high time someone raised awareness on the tribulations of being a lefty (and I'm not just saying that because I am, in fact, high); B) Because I've been watching a lot of Sabrina, The Teenage Witch lately (starring Melissa Joan Hart at her prime) and I just think it needs to be said; and C): 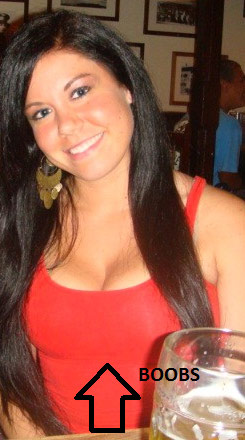