>>> Against Your Will
By staff writer John Marcher


One of the problems with the modern relationship is the perception that it is contingent on “love,” or some other combination of unquantifiable factors that culminate in a situation that is unique to the people involved, and from the outside ineffable. There have been poems, sonnets, movies, and diatribes that have attempted to encapsulate the supposed wholly subjective experience of being in a relationship. These representations rely heavily on literary devices such as symbolism, inference, and analogy to try and give some superfluous, almost untouchable ideal of what a relationship is, or should be. I say a relationship is nothing more than an exchange of goods and services, more akin to the NYSE than PROSE (no offense Gaudio).

Once we are able to visualize the free market exchange that is the modern dating scene, the next step is to try to quantify commodities that are commonly exchanged. These commodities come in three overarching contexts:

The monetary category contains all the things that you spend money on, including dinners, movies, flowers, jewelry… even vacations. This category is, of course, the easiest to understand in terms of value or worth because each one of these things actually has a dollar value attached to it.

“Women use flirting, revealing clothing, and alcohol to enhance the resale value of their odiferous gaps.”

I should point out that one of the central ideas of the punanny exchange is that these commodities are subject to different evaluations of worth by both sexes. I bring this up simply because the monetary category is usually regarded as penultimate from the female point of view, and the second most important indicator of male interest, trailing only…

The bullshit category is compromised of everything that women hold near and dear to their hearts. Cuddling, time on the phone, Facebook/MySpace relationship acknowledgement, and social circle immersion are just a few examples of the warped nature of the female mind. These concepts exist simply at the behest of the female gender because they have no goddamn idea what it is they want out of life, love, or the Olive Garden, and the only way they can come close to feeling a small sliver of the higher ideal they regard as the perfect mate is by eliciting these dated and useless behaviors. Because let’s be honest, if men had their way, the exchange of goods and services that compromise a modern relationship would involve only the first category and…

Here we get to the meat of the problem people. Handjobs, blowjobs, intercourse, orgasm, and even simply seeing your partner naked are concepts that have been sought after since the beginning of humanity. There is nothing more primal, more psychologically ingrained (outside of perhaps eating and shitting) than the pursuit of procreation. For millions and millions of years, our ancestors, and the varying iterations of species that have culminated in the Homo sapien sapien, have been focused on accessing sexual intercourse with a member of the opposite sex. I guess I only bring this up because I think it warrants contrasting these formulaic and ingrained behaviors against the unnecessary and made up nature of the previous category.

As I mentioned earlier, the most important thing to remember when walking yourself through these different categories is that each member of the relationship has their own way of assessing their comparative worth, and it is with this in mind that I lay out my next example: 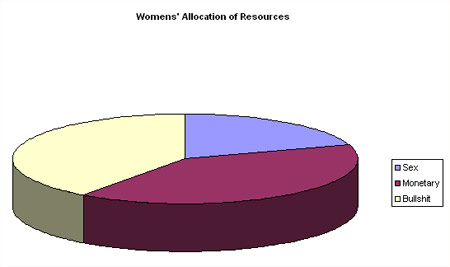 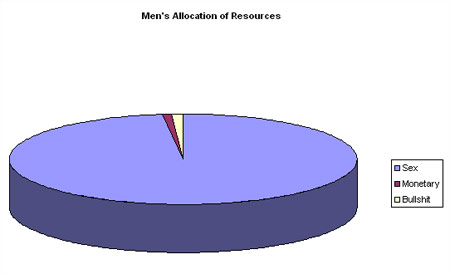 No need to thank me, just like Trick Daddy, Marine does it fo da kiddddds. These graphs represent what each gender is attempting to attain through participation in the rigorous and psychologically draining process known as dating. You can see very clearly from the pie charts that there is a stark difference in the goals each gender has set for themselves. And in case you’re wondering, the pie charts are apple, and key lime respectively.

At this point you’re probably saying to yourself, “Marine, you’ve outfitted me with a powerful framework within which to understand the intricate dealings of a relationship, all the while mesmerizing me with your dashing good looks and razor sharp wit, but to what ends should I use thisinformation?”

You need to use it to your advantage at every turn. You see, women have been capitalizing on the valuable commodity known as the puntang ever since they figured out that it wasn’t an inverted penis. They use flirting, revealing clothing, and worst of all alcohol to enhance the resale value (because virgin puntang is a whole different column) of their odiferous gaps.

It is with this in mind that you need to implement a strategy I call expectation management. In other words, be a complete fucking asshole. You need to purvey to your partner that you are simply ignorant of the many customary aspects of a typical relationship. Start by not even offering to pay for your movie tickets. Act normal, making chitchat while you wait in line, and then when you get to the cashier, ask for a single ticket. At dinner, ask for separate checks. If you’re planning a vacation, hash out all the details and then make your own reservations. If she questions you, have a few Susan Sontag quotes ready to go and chalk it all up to your fervent belief in the equality of the sexes. If she makes a stink, question the example she’s setting within the context of the women’s rights movement.

When it comes to bullshit, things get a little trickier. Again, you must act like even the concept of cuddling comes completely unnaturally to you. The same goes for talking on the phone, letting her hang out with your friends, and acknowledging the relationship on Facebook or MySpace. When she inevitably brings up this behavior, chalk it all up to religion. Jump on Wikipedia, find some indiscriminant religion no one knows much about, and feign borderline fanatical anger when she tries to question the validity of this claim. Afterwards, leave and don’t talk to her for a week. Next time you interact, lay the guilt on reeeeeeal thick, because guilt is the very foundation religion is based on anyway.

If you can take the time to understand the rules and reasons behind my most elegant diatribe, you will find yourself outfitted with the necessary tools to achieve the goal every man sets out to achieve in allocating the resources necessary for a meaningful relationship. And with plenty of time to spare to play Xbox, hang out with the guys, and fuck other bitches too.

After I came out as a lesbian my ex-boyfriend of two weeks asked what he did wrong.
Well, for starters, you’re a man.