Hey there Pointsincasers! Ya wanna have fun this summer? I mean reeeal fun? The kind of screaming orgasm-inspiring, nipple-erecting fun that can't normally be had without several wriggling naked girl bodies, twenty five gallons of peanut butter, and an ambidextrous spider monkey? Well that's just TOO DAMN BAD! Because you aren't going to be able to meet Jabberjaw.

Many historic roadside oddities are no longer in operation. Hell, you can't even find a decent dinosaur park since they shut down Sandusky's own Prehistoric Forest. I know what the majority of you are thinking, "Where can I buy twenty five gallons of peanut butter, and does the monkey HAVE to be ambidextrous?" Well, all I can say to you poor misguided saps is, if you're ignorant enough to even have to ask those questions, you don't deserve to know the answers to them. Go ask one of the bigger kids, or a grown up. I'm more concerned with the other two or three of you out there who are scratching your heads in confusion and muttering, "Who the fuck is Jabberjaw?"

Well, that I will dignify with an actual response. As any fan of barely animated 1970's cartoons about mystery solving teens already knows, Jabberjaw is a shark from the future who talks with a voice that sounds like Curly Howard from the Three Stooges. He played drums in the Neptunes, which was a band composed of teenagers with names like Bubbles and Clam-Head who looked like Scooby Doo, Where Are You? rejects. He constantly quoted Rodney Dangerfield's, "No respect!" line, only he continued to sound like Curly while doing so. From1976 to 1978, Jabberjaw was a Saturday morning cartoon star. Of course, if you're in my age bracket, you remember him more from reruns shown on the Cartoon Network (back when it didn't suck) or the USA Cartoon Express (back when it existed). But, if you're among a certain elite few people who were chosen by God to be born at the exact right second in history, and you're parents loved you enough, you may remember Jabberjaw from actually MEETING HIM IN PERSON!

Jabberjaw = the Michael Jackson of sharks from the future. (see below)

You see, friends, back in the early 80's there was a magical place, an amusement park that was apparently located in Texas called Hanna-Barbera Land. I never got to go there personally. Hell, I didn't even know it existed. But based on photographic evidence I've recently uncovered, it kicked copious amounts of ass. You see, this particular park paid their presumably miserable employees to lumber around in enormous felt costumes meant to represent popular Hanna Barbara cartoon characters. They had real life meetable versions of everyone from Fred Flintstone and Yogi Bear to Quick Draw McGraw and Hong Kong Phooey! This must have been an awesome sight to behold, because seeing people dressed in these costumes gave kids an opportunity to see Hanna-Barbera characters actually move, which they rarely did on TV. Equally awesome was the fact that the aforementioned shark Jabberjaw got his own costumed guy! And SO DID CAPTAIN CAVEMAN!

Here's the video for a Hanna-Barbera Land commercial, including rare footage of the Jabberjaw costume in action, and a child attempting to grope Smurfette:

Now I want you to stop and think about this for a second, folks. How many places can you go in this day and age to meet Jabberjaw and Captain Caveman in person? If your answer to that was anything other than "zero places," or even worse, if you answered "they live in my house," then you need to lay off those powerful hallucinogens, my friend (or at least share them with me).

Anyway, you can't meet these characters at Hanna-Barbera Land anymore. Regrettably, the park closed down sometime in 1984. I only found out about it because, like most internet users, whenever I've finished checking the T-Mobile girl's Twitter stream (in the hopes that she might mention a break-up with her boyfriend) I often research defunct amusement parks and abandoned roadside attractions. Doesn't everybody?

It's a sad fact, but many historic roadside oddities are no longer in operation. Hell, you can't even find a decent dinosaur park since they shut down Sandusky's own Prehistoric Forest. (Incidentally, I tried to buy their fiberglass mastodon after they closed but it was $13,000 and I only had $35 and some P.O.G's to my name.) Without these kinds of places, all we have left are the mega-coaster-super-parks like Cedar Point—the places where you spend 35 bucks to get strapped into a metal box and hurled into space at the speed of light so you can puke on your girlfriend. I don't know about you guys, but I certainly don't need to be hurled into space at the speed of light in a metal box so I can puke on my girlfriend. I have booze for that. You know what I do need though? A place where I can find a guy in a Jabberjaw costume so I can stick my head into its mouth and puke in there instead. From this moment on, any amusement parks without that feature just won't be all that amusing to me. 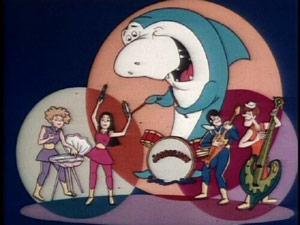 Shelly = the hot chick with the tambourine.

Now, I'm sure those of you unfamiliar with him may be wondering why in holy hell I want to meet this shark so bad. You're probably asking, "Was Jabberjaw even a good show?" Well, to all you whippersnapper philistines out there who don't know any better I say, "Of course it wasn't." Watching an entire episode of Jabberjaw was not dissimilar to having molten candle wax dribbled on your scrotum for 30 minutes straight. The curly voice was annoying, the plots and characters were stupid, and the theme song made you want to kill yourself. But he was a talking shark from the future dammit! Because of this fact alone (also possibly because I like the whole scrotum/candle wax thing) I watched the show constantly. Oh, and also because Shelly, the bitchy tambourine player chick from the Neptunes, was super-hot. She was like an underwater Veronica Lodge from the future. If they ever make a Jabberjaw movie, Carly Foulkes should play her. (I only mention this because I've decided to reference the T-Mobile girl as many times as I possibly can in each column I write until she goes out with me or I'm forced to stop.)

Here's the video for the ska-punk song "Jabberjaw" by the band "Pain." It is approximately one zillion times awesomer than the show itself was:

Anyway, please, whoever now owns whatever's left of Hanna-Barbera Land , take those costumes out of the mothballs and bring it back! Then I can go there, or even better, I can work there dressed as Jabberjaw. And if you're not gonna do that, will you at least sell me one of the Jabberjaw or Captain Caveman costumes? If I had one of those babies and a sufficient amount of peanut butter, I'm pretty sure I wouldn't even need to find a spider monkey. 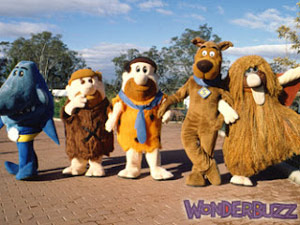 Jabberjaw pictured on the end, trying not to look at Barney Rubble who is picking his nose. Captain Caveman is next to Scooby Doo mocking us. 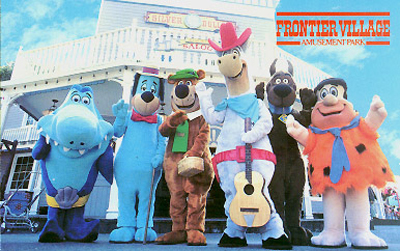 Note: Jabberjaw in the cartoon was supposed to be 15 feet tall but the costume of Jabberjaw is shorter than the Huckleberry Hound costume. This upsets me more than it should. 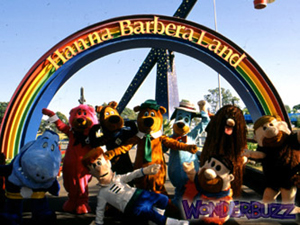 Somewhere under the rainbow.

More Like This
I Beseech Thee, Land-Lord
Alex Connolly
15 Subdued Alternatives to Harsh Overhead Lighting
McKayley Gourley
Excuse Me, Do You Have a Permit for This Outdoor Proposal?
Julien Perez
Resources

I’ll sell my brain before I sell my phone, because it’s worth more these days.

I Beseech Thee, Land-Lord
Alex Connolly
15 Subdued Alternatives to Harsh Overhead Lighting
McKayley Gourley
Excuse Me, Do You Have a Permit for This Outdoor Proposal?
Julien Perez
Banning Me from Game Night Is Nothing Short of an Orwellian Nightmare
Ryan Ciecwisz

I Will Funge These Tokens If It’s the Last Thing I Do
Nathaniel Brown
Excuse Me, Do You Have a Permit for This Outdoor Proposal?
Julien Perez
Think You Got What It Takes to Join Our Gang, the Crabapple Boys?!
Alex Baia
Not Funny
Tim Kochenderfer