Welcome to Internet Country, The Most Hateful Place on Earth

If you've been following the news lately, which I haven't, you'll probably see a lot of anger in the world. Some of it is from a populated cornfield burning LeBron jerseys and chasing douchebags out of stadiums, and some of it stems from people being mad about something going on in the Gulf of Mexico or something. But the strongest type of hate that a person can experience will come from the internet. No other vehicle can both deliver both breaking news and swift and vengeful punishment (normally in the form of prank phone calls and fake pizza deliveries) at the same time. 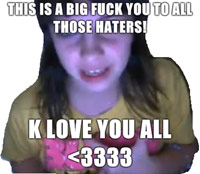 Take, for instance, Jessi Slaughter, an 11-year-old girl who's caused a media shit-firecane using only a webcam and a gap-toothed foul mouth. It started when Jessi made a YouTube video making fun of an internet group who was calling her names (which is fair, because she has a mullet). Since she's only 11, Jessi didn't understand that "fighting fire with fire" isn't a literal term and should not be taken seriously. She then proceeded to get chewed out by everyone with a keyboard and a subscription to an 11-year-old girl's YouTube channel, which, surprisingly, is 82% of the internet's demographic.

Justin Bieber was almost sent to perform for Our Glorious Leader Kim-Jong Il in North Korea after the internet decided focus all of its energy into answering an online poll. Any normal person would disappear from the web, but Jessi continued to fuel the fire by recording another video, telling everyone to "Get AIDS and die" and threatening to pop glocks. This was the tipping point that led to Jessi become the web's largest target of hate since that one guy who did something terrible to that cat somewhere. Even her hilariously angry drunk dad got involved and made a few cameos, tossing in a few one-liners which were passionately delivered while he squatted to get in view of his daughter's webcam. If this keeps up, HBO is going to give this family a television series.

If that wasn't bad enough, another little girl known all over the world, Justin Bieber, was almost sent to perform for Our Glorious Leader Kim-Jong Il in North Korea after the internet decided to focus all of its energy into answering an online poll. Granted, he probably won't go, but that's because he knows they would detain him and make him share a cell with the national soccer team.

If you need more proof of the internet's destructive power then take a look at Oregon. More specifically, the Oregon Tea Party, whose members decided it needed a slogan. Like most college students, they turned to Google so that they could plagiarize get inspired by someone else's work. Unfortunately, it seems they gave the task to an intern who came up with "We are Anonymous. We are Legion. We do not forgive. We do not forget. Expect us." That's a great slogan for a bunch of soccer moms and politicians, but an even better slogan for an online vigilante group called Anonymous, which was using it before the Tea-baggers came along. If the internet as a whole is a swarm of bees, then Anonymous is a swarm of android bees who listen to gangster rap—and you do not want to piss off a swarm of android-bees who listen to gangster rap. The Oregon Tea Party headquarters were flooded with emails and calls, and a day after the discovery was made, the slogan was changed (presumably to "Please stop with the male escorts").

So tread carefully when you browse, readers, the internet is an angry place that isn't afraid to chew you out. Now if you'll excuse me, I have to tell everyone on my Twitter that Justin Bieber is the best rapper alive.