Hey Michael Bay, It's Your Conscience

Hey Michael, it's your conscience. Just thought I'd pop by and give you the whole update on this new Transformers movie. You know, before you show it to the kids. They are the future, after all. 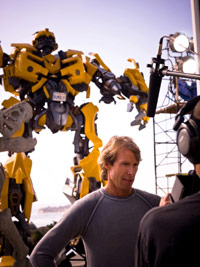 Everyone needs a little oversight.First off, fuck plot. You know how kids are, all caught up in their multi-tasking agendas, they wouldn't even have time to follow a storyline. Hell, half of them will be texting throughout the movie; all we need to do is make detonations loud enough to grab their attention. Times are a changin' Mikey, today's big action hits involve mindless explosions and hundred-car pileups. Remember Die Hard? Now add robots. That's what we're going for.

Actually, now that you think about it, fuck the comics and cartoon series too! That was all the way back in the 80's; they don't know shit about today's entertainment. Everyone knows that modern day sequels aren't based off the first movies anymore. Oh sure, in the first movie the only thing that could help the Decepticons was the Cube. How about, the entire species forgot about a second energy source, bigger and badder than the Cube! It's perfect! After all, you're the director, you can do whatever the fuck you want. If you want Shia LaBeouf to have a gay-ass out-of-body experience in which he envisions robots he's never seen before, he will! You have the power! Afterward, we'll just add so many explosions that no one remembers the first movie.

There's nothing better than defiling the badass nature of a powerful robot species than turning them into comic relief!Also, for those small clips between the explosions—the scenes where normal, boring movies would initiate characterization and conflict—the director and I have decided to simply shake the screen. Yeah, apparently it's that simple. All you gotta do is rattle the ol' camera around and have the actors mumble their lines and you have the rest of your movie! We already have 35 minutes of government employees murmuring executive-sounding phrases. Now we can drop 250 million on dynamite.

Next, we just got a call from Megan Fox's agent, and I have good news and bad news. The good news is that Megan has agreed to do the whole movie without a bra, and is willing to run in slow motion as much as we need. The bad news is that in the 16 months between movies, she's been too busy posing for Maxim, smoking weed, and fucking that queer from 90210 to attend any legitimate acting classes. So for a secondary character we have the acting talent equivalent to a box of Kleenex. But she's a box of Kleenex with no bra. Work with me here, Mikey.

And while we're on the topic, I want to pitch you some robot ideas. All the old ones suck. Bumble Bee? Are you serious? All the Decepticon needs is a Transformer that turns into a rolled up newspaper. How about one of those bickering twin comedy duos? Like Beavis and Butthead made out of cars. Yeah!! And how about an old man robot, like a senile grandpa Transformer! There's nothing better than defiling the badass nature of a powerful robot species than turning them into comic relief!

Finally, I wanted to talk to you about the final fight scene. Realistically, when building-size robots battle, they decimate everything in their path. In the first movie, they destroyed an entire city, so in the sequel you need to go bigger and better. I was thinking Egypt. We could have all the robots throw one another around the ancient ruins, smashing the landscape and destroying everything. Forget the disrespect that will be thrust upon the Egyptian culture as fictitious characters tarnish everything they stand for, we're making a movie!

And then we could make a super robot whose sole purpose is to crawl up the Egyptian pyramid and EAT IT! Yeah! Fuck Egyptian culture, we're defending America!

So I hope the movie goes well, Michael; I know it will when you follow all these instructions. And just remember, if this movie is a total flop and everyone hates it, we can simply give it a sketchy ending where some of the bad guys escape, allowing potential for a third movie. I already have a great idea for another fight scene where the Autobots and Decepticon fight in an orphanage and then later in a children's hospital. It's gonna be fucking awesome.