The real news (for boring people)
The breakdown (for college people)

CAIRO, Egypt – The first facial reconstructions of King Tutankhamun based on CT scans of his mummy have produced images strikingly similar to the boy pharaoh's ancient portraits, with one model showing a baby-faced young man with chubby cheeks and his family's characteristic overbite.

That model, a photo of which was released Tuesday, bears a strong resemblance to the gold mask of King Tut found in his tomb in 1922 by the British excavation led by Howard Carter. 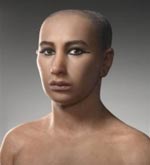 The beardless youth depicted in the model, created by a French team, has soft features, a sloping nose and a weak chin — and the overbite, which archaeologists have long believed was a trait shared by other kings in Tut's 18th dynasty. His eyes are highlighted by thick eyeliner.

How weak is the chin do you ask? Well let's just say it couldn't even bench press the bar. Yikes.

Three teams of forensic artists and scientists — from France, the United States and Egypt — each built a model of the boy pharaoh's face based on some 1,700 high-resolution photos from CT scans of his mummy to reveal what he looked like the day he died nearly 3,300 years ago.

It would be funny if they could create a model of him eating a sandwich in a deli. I mean, WE HAVE the technology don't we?!

“The shape of the face and skull are remarkably similar to a famous image of Tutankhamun as a child where he was shown as the sun god at dawn rising from a lotus blossom,” said Zahi Hawass, secretary-general of the Egypt's Supreme Council of Antiquities.

Shown as the sun god at dawn rising from a lotus blossom? HOW CLICHÉ! That was every kid's portrait back in kindergarten!

The CT scans — the first done on an Egyptian mummy — have suggested King Tut was a healthy, yet slightly built 19-year-old, standing 5 feet, 6 inches tall at the time of his death.

He was standing at the time of his death? That sounds hard to pull off…but then again he WAS slightly built….

The three teams created their reconstructions separately — the Americans and French working from a plastic skull, the Egyptians working directly from the CT scans, which could distinguish different densities of soft tissue and bone.

How ironic, the EGYPTIANS are the ones working with fancy technology. Then again, they did build the pyramids before the Internet was even around….

The French and Egyptians knew they were recreating King Tut, but the Americans were not even told where the skull was from and correctly identified it as a Caucasoid North African, the council said in a statement.

“The results of the three teams were identical or very similar in the basic shape of the face, the size, shape and setting of the eyes, and the proportion of the skull,” Hawass said.

The French and American models, seen in photos released by the council, are similar — with the Americans' plaster model sharing the more realistic, French silicone version's receding chin and prominent upper lip. The Egyptian reconstruction has a more prominent nose and a stronger jaw and chin.

The American Version also has chili on the sides of the mouth and an “I'M WITH STUPID” t-shirt.

They were able to dismiss a long held theory that Tut, who died around 1323 B.C., was murdered by a blow to his skull or killed in an accident that crushed his chest. It raised a new possibility for the cause of death: Some experts on the scanning team said it appeared Tut broke his left thigh severely — puncturing his skin — just days before his death, and the break could have caused an infection.

Yeah, back in the day people died from all sorts of common illnesses. The cold, the flu, deep thigh impailments. You name it, and a Caucasoid has died from it.

Hawass is leading a five-year project to scan all of Egypt's known mummies — including royal mummies now exhibited at the Cairo Museum. Eventually, each mummy will be displayed alongside CT images and a facial reconstruction.

What about the daddies!? LoL!

“For the first time, we will make these dead mummies come alive,” Hawass said.