I was on the fence about writing about this, but then I saw KC's post about his hair and figured why not? I don't think the woman in question reads PIC, and if she does, well, I'll deal with it.

Not too long ago, I was leaving work for the day. A woman came out of the same office I did—she was presumably one of our clients—and headed for the elevator. Being a gentleman (in the streets of course—I'm a bonafide freak in the sheets), I let her get into the elevator first. The following conversation ensued. (Actual conversation in regular typeface. My thoughts in italics.)

Woman: Aw! How polite are you!?

X: A little, sometimes, I guess.

Woman: Those are some mighty long dreadlocks you have.

I'm clearly dealing with an extremely observant woman here. Her incredulous tone puts her only a couple notches above children who tug their mothers' sleeves and ask "why that man has a face made of chocolate."

X: Thanks, I grow them myself.

This, of course, isn't true. I pay a frail Indonesian child 3 dollars a month to grow them for me. I then glue them to my head using Elmer's finest and beeswax.

Woman: You should cut them shorter.

Was her third sentence to a complete stranger hair criticism?

X: You know, I've spent all this time growing them out, it's hard to let them go so easily.

Woman: Oh, I know. But there's a difference between being hip and looking like you should sell purses.

I was actually flabbergasted at this point. A litany of biting remarks scrolled through my head but I decided just to keep my tongue; I figured no good could come of what I actually wanted to say.

Snatching isn't the same as selling, now is it?

Woman: Oh I know, you're obviously a very hip guy (gestures to my outfit, which is my usual psuedo-hipster nonsense). Just the hair is too long!

This elevator ride is taking forever. This woman clearly wants to say, "you almost look like a non-scary black guy, but the hair is making you look scary! You should look more like a friendly black person, like Wayne Brady or…"

X: You know, I actually don't follow Whoopi that closely for my own personal aesthetic. Not that she's not fabulous, I just don't know if her look is *quite* right for me.

(We've gotten off the elevator, but she's continuing to talk.)

Woman: Oh, but she's so nice! I met her on 3 separate occasions. Once, a long time ago. She was so nice to me!

Whoopi Goldberg is nice. She cut her hair. Therefore, I should cut mine. Thank god this woman never came across Ghandi's wiki entry, otherwise she might have tried to convince me to shave it all off.

Me: She sounds nice.

At this point, I'm not even trying anymore.

Woman: Your mother has never asked you to cut it?

I decline to tell her that both of my parents have locks longer than mine, and neither happens to sell purses. I don't want to melt what few remaining brain cells she was left.

Me: Oh. Hey, I have to go that way (please don't let it be the same direction), but it was fantastic talking to you. Have a good night!

One of us should.

There aren't any recent pictures of me with short hair (obviously), but here's a picture of my purse-selling locks: 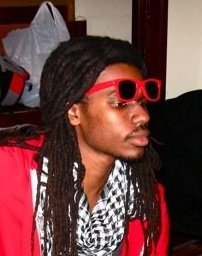