This world is filled with stupid cliche's. People always say them because they can't help it. Cliche's make the world a quicker place because they keep us from thinking originally, which takes more time than the alternative: repeating boring phrases.

Because even though this world offers five million websites and a thousand channels of television, we are still not entertained well enough. That's why it is up to us, the people of this great nation, to make everyone's day a little more surreal. So the next time any of the following cliche's are dumped in your lap like a cold drink from an even colder bitch, you can keep it interesting. Keeping it interesting is much better than keeping it real, in my opinion. Keeping it real just gets you Chlamydia and an ass-kicking. Keeping it interesting gets you interested. And let's face it: for all our technology and entertainment, we're still a relatively bored society.

Whenever someone tells me to take it easy, I always respond with, “Ain‘t no other way to take it.” Alternatives include, “Fuck man, I'll just take it” or “Easy is for hippies, loser.” Also, if you're a chick you can always reply with, “I was taking it easy, but I missed the orgasms so I started taking it hard.”

Whenever someone tells me to have a nice day, I like to respond with, “What about the evening? Can I have a nice evening too?” Sometimes I'll even say, “My day will be better than nice, thank you very much.” Maybe this isn‘t the most polite way to talk to people, but fuck them. They're obviously boring if they can't come up with anything better than “Have a nice day.” Stupid people.

Whenever someone tells me “That's why they call it gambling,” I respond with: “Actually, they call it gambling because it was invented in the Gampong region of China, where criminals were thrown into a pit with wolves. The ones who survived were then beaten to death with large stones. As the criminals were screeching ‘Why, why all the torture?' the Chinese would respond ‘It is what it is.'” No one ever believes me. Or even laughs for that matter, but whatever. The important thing is that I'm entertaining myself.

In this great time we're living in, where instant gratification isn‘t fast enough and laziness is a way of life, it's good to mix up the perceptions of others, because regular people say regular things. And that's boring.

And I get enough of boring at work. 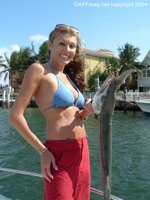 So think about what you say to the assholes you meet and maybe, just maybe, we'll increase our culture's concept of societal interaction and in doing so, laugh more.

Because laughter beats the shit out of boredom. Sometimes with a large frozen trout.

To be honest, a fair credit score isn’t.