Romantic Firsts: I'll Show You Mine If You Show Me Yours

Some kindergarteners learn more during naptime than others.

Spring is in full effect. Romance is in the air. Skirts are getting shorter and the number of public erections are on the rise (see what I did there?). It's the time of year when, shaking off the cold sting of winter, hearts open up and we all start feeling the latent desire for companionship. If for no other reason then to not be the creepy guy alone at the beach, sobbing uncontrollably while staring at high school girls in bikinis.

Love and romance are a part of human existence and we've all felt its amazing highs and gut wrenching lows. But nothing will ever compare to that first time. Not just the first time you fell in love, but all your first times: the first time someone you liked smiled at you, your first crush, your first kiss, your first wet dream, and the unimaginable panic upon waking up and wondering how you're going to clean this mess up without anyone knowing. These romantic firsts will inevitably catch you off guard, and, if you're like me, you'll end up horribly embarrassing yourself every time.

We had a spectacular recess that day. I pulled her hair. She threw rocks at me. It was magical. Then came naptime… Enter "Romantic Firsts of a Buffoon," where I will take you on a journey through my own greatest hits of first time disasters. Buckle up. It's going to be an embarrassing ride.

My first First lives on in Terry family lore and is brought up at family gatherings often. Unlike many guys out there, my first romantic interaction wasn't holding a girl's hand or a kiss on the playground. I kind of jumped the gun on this one. My introduction to girls as the opposite sex and a source of funny feelings down there happened at the age of 4 when I touched a vagina for the first time; I have always been an overachiever.

It was 1988 and I was in kindergarten. My chief worry in life was coloring inside the lines and discerning the subtle differences in the tastes of different colored tubes of Play-Doh. I found that blue had a heartier, more robust bouquet while green had a light flavor that danced on the pallet. Yellow, on the other hand, was just awful. I don't know what the chefs at Hasbro were thinking.

All I knew about girls was that they had cooties and that, as a boy, to be afflicted with these terrible parasites meant certain death. I spent many an arts and crafts time folding and refolding sheets of paper to make the perfect Cootie Catcher. I'll be damned if one of these louse-infested females was going to infect me with her mysterious bugs.

Then a new girl showed up in class and all that changed. Brooke had long, curly brown hair and piercing blue eyes. The moment I saw her I knew—I just KNEW—she didn't have cooties. I was positive that I could approach her and say hello while keeping my He-Manliness intact.

We had a whirlwind romance. I shared my PB&J sandwich with her. She showed me how a dash of Elmer's glue can really bring out the flavor of wheat bread. She liked the taste of yellow Play-Doh, but everyone has to look past a few quirks in a relationship. We had a spectacular recess that day. I pulled her hair. She threw rocks at me. It was magical. Then came naptime and what will be forever known as "The Naptime Fiasco."

After a hard morning of ABC's and coloring and running on the playground, we were beat and ready for some rest. We laid down on our floor mats. I pulled my Superman blanket up and settled in. But I couldn't sleep. I looked over at Brooke who was on the mat next to me. She was awake too and looking back at me. We scooted closer to each other. I threw my blanket over her and we reveled at the creation of our own little bubble, protected from the outside world by Superman and cotton. Underneath the threads, we played a little game you might recognize called "I'll show you mine if you show me yours." And "show" we did! That day I learned something that, as an adult, I still find to be one of the universe's undisputable truths: vaginas are weird.

I had no idea what was wrong with this girl. Where was her pee-pee? I looked down at my own eleventh finger to make sure I had the correct reference for what I was supposed to be seeing. Finding that everything was intact down on my crotch, I looked back at hers. I poked it a couple times like one would poke a steak to see if it is cooked completely. Baffled, I asked how she peed out of that thing. Just as she was about to answer, the blanket was yanked from over top of us.

Our bubble had been popped. Superman was defeated by my teacher, Mrs. Washburn, who was aghast at what she discovered. We were made to stand in separate corners of the room facing the wall while our parents were called. As I stood there wondering what I had done wrong, another one of those undisputable truths came to me: vaginas are trouble.

My mom picked me up from school that afternoon and had a talk with my teacher. That night at home she told my dad what had happened. He kept a serious face but I'm positive I heard him quietly say to himself, "That's my boy." Years later my father told me that after I was sent to my room that night he and my mom laughed for an hour. I'm happy they got a laugh out of it. I was traumatized for years, fearing the repercussions if I ever got that close to another girl's no-touch zone. 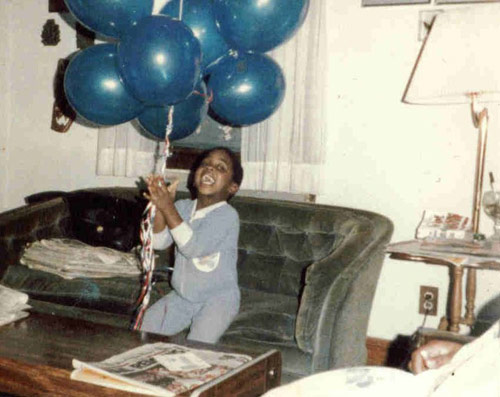 I now know that these balloons were a congratulations gift from my dad.

Brooke was gone the next week and I never saw her again. I never even learned her last name. And, worst of all, I never learned how she peed out of that thing. Even now, having had time to study vaginas quite closely, I'm still unclear how the whole thing works.

Next time on "Romantic Firsts": My First Kiss – Bruised Lips and Drool, Lots and Lots of Drool

Related
I’ll Never Forget You or Your Wild Accusations, But I’m Still Moving Out
Emma Marks
Cap’n Crunch and Tony the Tiger Are Still Fighting About the National Anthem Kneelings and It’s Ruining My Mornings
Tanner Garrity
One Man’s Eulogy to the Love That Nearly Killed Him
Sarah Nassiri
Resources