A Financial Approach to Having Sex as Quickly as Possible

Every moment having sex is a moment not making money.

Hi, Nick Hilbourn here, financial and sexual consultant. When I first had business cards printed that expressed these two (supposedly) estranged topics, I usually heard astonishment at my expertise in two very "different" fields. (I should note that the person asking the question did not put quotation marks around "different," I did.)

The problem that I point out to those people (and now you) is that we don't link them enough. Of course, The Feminists will surely jump on me for that one.

No. The Feminists usually like to automatically jump to this point. But, once again, they've tried to over-interpret and have instead fallen flat on their liberal faces. They're thinking way too superficially and materialistically. Worshipping the devil or Steve Jobs or something overtly secular. Meanwhile, I'm over here in a church with God asking all of you to think about the spiritual quality of money (a small but important part of finance). 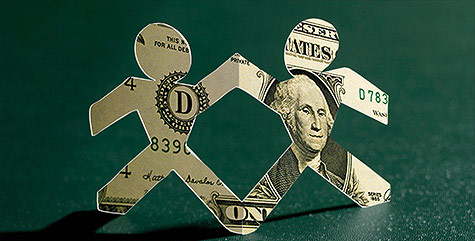 You're kicking yourself right now, aren't you? It's what we all desire from sex but are too scared to ask because The Feminists are always out there, looking for a chance to come down on us with their vaginal hammer (more about this particularly dangerous time-eater later …). Getting caught up in emotion and meaning is nice for people who've never had sex before, but for me (SIX times) the whole act simply became a bit too time-consuming. I found myself thinking about other places I could be.

Shouldn't I be out doing something that will make money?

Imagine the penis as an electrical tool used to plow through concrete. As you mount the female, see her vagina as a sidewalk in New York City.But I realized that it wasn't sex itself that was such a waste of precious moneymaking hours; rather, it was the way we do sex. Despite the sickening sweet romantic view of sex (mostly encouraged by The French in collusion with The Feminists), sex is all about speed. Sex should be like that first drink of Mountain Dew you had before you decided to go skateboarding with the other boys in your school. The ones who built their own ramp at the house down the street, but you were too nervous to go there because you didn't even know how to do an Ollie.

Then, you drank Mountain Dew. (I don't even remember what happened, but I must've been incredible. The Dew carried me through, I suppose.)

This article's going to give you some helpful techniques to streamline the sexual process.

But before that, we need to discuss an important preliminary strategy that will ensure success. After all, before you invest big money, you need to have a sound financial strategy. Will you bury your first million in the family sepulcher? Convert it to gold and stash it in the hollowed-out doll of your estranged daughter? Invest it in future companies that don't exist yet? (Space Phone and Robot Day Care are two of my top picks.)

Well, first you should consider your sexual relationship with the spiritual world. How do you and God get along…sexually? Now, again, don't think I'm talking about sex in a disgustingly physical way. (After all, with all the sounds and smells and noises, the physical body is nauseating.) I'm talking about financial sexuality. For example, when you ask for your stock to rise, can the Lord make it rise, or does it remain a limp, phallic investment in Yankee Dollar? When you want to buy the new Samsung Galaxy, does the Lord provide (as he did for Moses) a parting of the contractual seas so you can skip out on T-Mobile and penetrate the wet, pulsing 4G Verizon network?

If not, then you've got a lot more work to do.

But if you've done the groundwork—if you have a healthy sexual relationship with God—then you're able to pursue the filthy, physical act of sex with an efficacy that your poor, hippie friends enjoying the wasteful fruits of pleasurable physical coitus only dream of. "God's on your side," as Bob Dylan would say.

Of course, you have to engage the physical and you want to do that as little as possible. And there are three techniques that I like to employ in order to make the task as quick and painless as possible.

Imagine the penis as an electrical tool used to plow through concrete. As you mount the female, see her vagina not as a tender, fleshy orifice, but rather as a sidewalk in New York City in the middle of the summer with her innermost parts as the faulty septic tank you intend to replace. You need to get to that septic tank as soon as possible in order to fulfill Mayor de Blasio's septic tank replacement quota. After all, if he doesn't meet his quota, then the city loses money and so do you.

A note I should make on this technique, especially when employed by women: you will want to warn your partner about the exercise of the "vaginal hammer." This technique (employed by The Feminists and supported by the French) involves a slow jackhammer…as if you videotaped The Jackhammer in a motel room with a camera hidden behind a Wendy's cup and then slowed down that videotape to half speed. Sex will take forever if you do this. Be wary of it. When it occurs, employ a Reverse Jackhammer in order not to sacrifice precious time just lying there (this happened during my second time having sex and I've never forgotten it).

The biggest waste of time is foreplay.

Imagine if you had to do this financially before you invested an enormous sum of money in Space Phone. Well, check out who has the one plus nonuple zeroes waiting for them in the year 2230 and who's stuck with a measly 0.00001% share in the SP (not even enough to buy a cosmic burger at McRockett's).

The E-Z Pass is a kind of sexual editing. As the Lord says, "I got rid of the chaff so that there was non-chaff stuff left." I used to waste a costly two to three minutes on foreplay when I had sex, but now I'm done in half that time.

Of course, don't be a monster, guys (and don't be stupid ladies): lubricant is essential. And for the kind of high-octane, Wall Street fucking that you'll be doing, no simple CVS KY Jelly will do. No, no. I've found that the Selmer Valve Oil I use to grease the pipes and valves of my euphonium before playing in the community orchestra works best. A few dabs of that and you'll be fine. If it works for brass, it'll work for anything.

How long does it take you to remove your clothing? Men? About ten, twelve minutes? Ladies? An hour? Two hours? This is probably this biggest waste of time. And, if you're already employing the above techniques, it's also kind of contradictory.

Personally, I arrange all my clothing—business attire, track suits for b-boying, workout clothes, everything—to be halved and reattached with Velcro. That way, when I prepare to take a shower (quick note: sex in the shower also saves time and Valve Oil), I only give a slight tug and my clothing falls off me.

Now, maybe you don't like the aesthetic appearance of this. Maybe the black strips of Velcro down each side of your outfit are unsettling to you. To each his own. But, of course, the point of sexual efficacy is cutting as much overhead as possible in order to achieve a suitable product. Creating subtle, easily removable Velcro areas around the crotch provides you and your business partner with easily accessible sexual organs while not sacrificing the aesthetic value of your J. Crew or Route 66 evening wear. Even more subtle is the technique I used during the fourth time I had sex, when I cut a hole in the crotch and attached a Velcro patch to the opening.

This is merely an introduction to sexual efficacy. The tips included for sex can be applied (as you probably intuited) to all aspects of your life. Don't forget that these are, in essence, spiritual tips. Every moment is a chance to make money. You don't want to show up in the afterlife broke or having made the wrong decision (Time Traveler Checks…bad investment, trust me), and the best way to make a good decision is to make it fast and without thinking.

Often, when I have had sex (SIX times…maybe a seventh time on Thursday), I don't even look at the person. I find that when we're finished, the woman also doesn't want to look at me. It makes me feel warm inside that we're both embracing the important lessons that a financial relationship to the spiritual world can give those of us who want to increase our capital while maintaining an important quantitative interest in sexuality.

So good luck to all you future billionaires out there. Maybe I'll see one of you on Thursday.

Related
How to Not Fall Asleep Quickly: A 12-Step Guide for Single Women
Susan M. Gelles
Everyday Tasks That Are Impossible With Someone Watching
Megan Broussard
An Olympian’s Guide to Having Sex with Athletes Living Under Various Forms of Government
Josh Lorenzo
25 Signs Your Girlfriend is Having an Affair with Donald Trump
Samuel Vargo
Resources