The holidays always get me a bit depressed. In a time of excess, money, greed, and alcoholic Santas, I'm always reminded of those less fortunate (and no, I'm not talking about people who go to state colleges—losers). I'm talking about the homeless, the poor, the people on Nickelodeon Christmas specials that somehow can afford gorgeously furnished homes but can't afford to feed their kids (poverty is not a joke, Kenan & Kel). The problem is, while I strongly sympathize for those poor souls whose idea of a Christmas dinner is a container of old chicken salad and a half-eaten bagel, I'm too damned lazy to do anything about it.

Now I'd be more than happy to give to a charity if I weren't convinced they were actually a front to produce George Clooney movies. True story, last Christmas there was a Toys 4 Tots venue outside Stop & Shop. After grocery shopping, I decided to be generous and saunter over. Now, the way I assumed Toys 4 Tots worked was, I would give them money, and in turn, said money would be used to buy toys…for tots. As it turns out, T4T actually has its own toys that you, the giving soul, buys. So I went over, and was told the minimum amount I could donate was ten bucks. Now, whenever a charity tells you there's a minimum to donate, get the hell out of there. Go take a bum to the bar and buy a few rounds of Jagerbombs, because you're about to be taken for a ride—might as well here some great stories about ‘Nam.

So, like a dope, I said okay. "What can I purchase for ten bucks?" I asked. You know what the guy told me? A coloring book. For ten bones. A damned coloring book. Ten dollars for a coloring book. It wasn't even a nice coloring book. It was some Dora the Explorer piece of shit. I told the guy, for ten bucks, I can buy ten coloring books. He called my bluff and I pretended to go back outside for ten books, but just left out the other exit. Well, why should I support a charity that has no concept of value? Shouldn't the idea be to help as many children as possible? So that episode made me sad and a bit jaded. If you can't trust Toys for Tots, who can you trust? I decided to get creative.

After all, charity begins at home, so here are five charities I'd like to see.

Listen, I'm a firm supporter of the fight against breast cancer. I've had relatives who have survived and/or are fighting it as we speak. If someone asked me to sponsor them on one of those walks, I absolutely would…and I've got a lower credit score than Mike Tyson. With all that said, breast cancer is overrated. Everyone makes a big deal about it because it predominantly affects women…so it's backed not only by the health care industry, but feminists, Lifetime, etc. Again, I pray for a cure, but let's not put all our unfertilized eggs in one basket. There are dozens of other cancers, affecting both men and women. 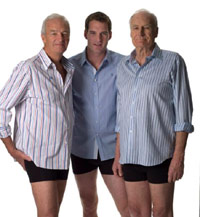 PETA gets naked women to help animals and all we can get to save men is old dudes in boxers?Take prostate cancer. Prostate cancer, you may not know, is the number four cause of death for men behind lung cancer, dealing with women, and betting on the Cleveland Browns to cover a spread. Yet nobody says boo about prostate cancer. There are no walks; Lifetime doesn't devote an entire month to its "awareness," there's not even a ribbon. How do you not have a ribbon? Every cause has a ribbon.

So I say we create a charity to combat prostate cancer. But not a walk. Screw walking. If we're going to help men, walking is not the way to do it. I say we drink. Sponsor a buddy to drink, say $1 per beer, $2 per shot. I've got a few friends who could cure about four diseases by the end of the first SportsCenter.

And one other side tangent…call me an idealist, but with a cure for cancer still unknown, why the hell are we still going to space? We spend billions every year on NASA to send some Erector set robot to Mars for no reason whatsoever, yet we still don't have a cure for cancer. Where are our priorities? I have no idea if the president is reading this, but spending the NASA budget on curing cancer might be a good platform.

One of my grandmothers told me she spent $400 last month on medication. $400! She could order HBO about 80 times for that. And she's not alone. Ever go into CVS or Walgreens on a weekday? It's like a friggin' Matlock convention. Since pharmaceutical companies have no qualms about boning over old folks with outrageous prescription costs, many are forced to neglect giving undeserving grandkids $20 for hugging them on their birthday. That's really sad.

So what makes you feel better and doesn't cost a lot of money? Why reefer of course. For the record, I don't smoke marijuana, but I know people who do and you know what? They're never sick. I get the flu just thinking about an airport men's room and they could swallow the throat cultures of a third-world populous with nary a sniffle. Besides, what's funnier than an old-timer stoned off his rocker? That makes Borat look like United 93. 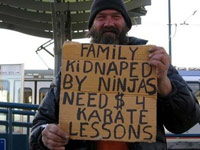 Call me sick, but some of my favorite viral videos are the ones of homeless people beating the shit out of each other for the promise of a bag of Fritos. Now, that's terribly abusive, but let's be creative. Why not start a homeless football or basketball or baseball league? Everyone knows how to play some sport. Not only would homeless athletes be fun to watch, you don't even have to pay them; just let them sleep in center field.

Sports fans always bitch about overpaid athletes not giving a shit. My favorite team (the Boston Red Sox) signed J.D. Drew for $14 million a year, even though Drew has a penchant for not giving a rat's ass if he strikes out or not and invariably causes me to throw a full beer at the TV set. Would I rather watch overpaid ‘roid heads or a guy trying desperately to steal a base in exchange for a chicken sandwich? It's not even a question.

I'm absolutely convinced that the U.S. government has a cure for AIDS but is withholding it because everyone who gets AIDS is either gay or a prostitute. Look at Magic Johnson. He had AIDS, now he doesn't. So obviously it can be cured. And don't give me, "Well he has a lot of money so he can afford a cure." As Chris Rock once said, there's no money in the cure, the money's in the medicine.

So here's my plan. We get a hold of the AIDS virus and inject it into some Republican senator from the South. Or even better, Rick Santorum. That would be perfect. Shit, we do that, force said Republican to find a cure in 24 hours and boom. Cure. An ear infection would be more dangerous than AIDS. (And yes, this idea sounds eerily like the plot of Mission: Impossible 2.)

My fantasy football team (The Silly Nannies) caused me to do the following last season:

What does that tell you? (Besides that I need a girlfriend badly.) That tells you people care about their fantasy team. It's something you have to commit to, there's an element of competition and it allows you control in a world where you live with your parents, can't afford your cell phone bill and have made more than three visits to a Coinstar machine in the past month.

So why not apply that to adopting one of those third world kids who can't afford bottled water or some shit? Get a group of buddies together and create a league where you each adopt a child (from a different country) and see who can raise the most successful kid. You gain points if the kid gets an education (perhaps a chemical engineering degree that's absolutely useless in the States). You lose points if the kid becomes part of some terrorist organization that drives jet skis into oil tankers. If you told your buddies you wanted to start a Third World Adoption Fantasy League, who wouldn't want to join? Are you kidding? I'd be in at least three leagues. But if a kid fucks around, I'll gladly trade him for a goat and a pauper to be named later.

P.S. If you are interested in giving, here is a link to a charity you actually can trust: St. Jude Children's Hospital (Please don't ask me if it's tax-deductible, because I have no idea what that means.)

[Editor‘s note: For those of you who've read PIC for years, please note that this piece surfaced by chance from deep within the PIC vault. "JD" is not planning a comeback as far as I know.]

Related
Letters Home From a World War One Fuck Boy
Declan Cross
Statistically Speaking, Most Accidents Happen in the Home… My Home
Dan Caprera
I Now Have a Passion For My Job Thanks to the Home Brewing Station I Set Up in My Cubicle
Rowdy Geirsson
Resources