A Brief Analysis of Stupidity

I just came home to a sign on the staircase leading to my apartment that said "Lost apartment keys. If found, please return to apt 13112." As someone who has, through necessity, learned to speak moron quite proficiently, what surprised me most was that I still found stupidity of this magnitude shocking. Since by my estimate the average person has the intelligence of salad dressing, you'd probably assume that I had learned my lesson by this point.

If so, you'd be wrong. I happen to know the genius who lives there, so I decided to give him a heads up. The conversation went something like this:

Me: Hey schmuck. Are you trying to get robbed?
Schmuck: (Dumb look, followed by a painfully long pause) Huh?
Me: The sign you put up. If someone finds your keys and has your apartment number…
Me: …They could let themselves in…
Me: …And rob you.

As the implications of my revelation rattled around his empty skull, his puzzled smirk tore through the last shreds of my patience. Rather than list the plethora of options, I hastily escaped before my homicidal urges overwhelmed me. In that moment, I had no doubt that I would have been doing society a favor by eliminating him from the gene pool.

Which is why I will never own a firearm. I'm all for Second Amendment rights when the person their protecting is within their right mind. Considering that I've been questioning my own sanity since I was old enough to have cognitive thoughts, and the list of people who piss me off has gotten so long that it would now be easier to list those who don't, I don't think I qualify.

But what really got me thinking was that the aforementioned schmuck is about to become a doctor. This imbecile is about to be licensed to save lives, and presumably, advise against poor judgment. I have never been so proud to have rejected standardized education as I was in that moment (though to be honest it did its fair share of rejection of me as well).

I contemplated wisdom versus knowledge, nepotism versus merit, and all that good stuff.  And then I lit up a J, hoping to bring solace to my frustration. 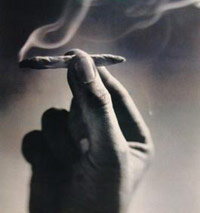 My god that looks tempting…. What was this article about again?As the smoke clouded my lungs and judgment, I began to contemplate much more important things. Why Jim Belushi is still on television, and why I have yet to see reruns of Arrested Development.  How many Milano cookies do I have left, and what is the magic number of them I'd actually get up for without regretting it. As these mysteries played across my mind, I realized something; an epiphany of sorts, one that would surely change the course of my life. It seemed very profound at the moment, but ten minutes later I hadn't the foggiest idea of what it was. Try as I did, I couldn't even narrow it down to a topic.

Just then, the moral of this bitchslapped me back into reality.  He might have been born that way, but I had officially smoked myself retarded.