We all love our dogs. But we also know the very real, and very frightening issue of the growing communist threat. Our country's freedoms and ideals are a stake. The iron curtain is spreading into our cities, neighborhoods, and schools. Therefore, it is necessary to be concerned that your canine companion may be a Communist, without you being aware of it.

Here are five ways to tell if your dog is a Pinko.

1. Plays well with other dogs.

Communists love to share. Is Fido running around and playing with the neighbors' dogs, or setting an example of group identity? Watch your dog closely to make sure that there isn't too much order and unity in its group of pals. If there's anything Commies love to do, it's form groups of like-minded thinkers.

In addition, observe the structure and hierarchy of the group. Is your dog a follower? If so, then it may be possible to sway him or her back to capitalist values. If your dog is acting leftist AND acting as a leader, call your local animal control.

Does your dog blindly follow your orders? Does he or she seem to do just about anything it's asked to do, without first contemplating the efficiency of it? For example, try asking your dog to "sit" and observe what happens. If it sits immediately and then looks at you awaiting further instruction, this is a tell-tale sign of communist tendencies. Encourage your dog to question the command. After he or she follows your order, slap your dog on the nose and ask it why it proceeded without personal consideration. Commies hate individuality. A good pup needs to think for itself, take up activities on its own, and learn to provide food and water for itself. 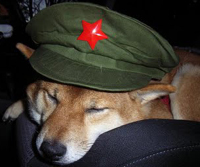 "By the time I wake up, there should be a nice, full bowl of dry food waiting in the kitchen. Maybe if I sleep with that irresistably cute smile, I'll get a biscuit too…"Make sure your dog is getting plenty of activity. If it spends an excessive amount of time lying around doing nothing, be cautioned. This is one of the strongest signs of communist behavior. Next time you see your dog lying on the floor like a furry sack of liberal, don't feed it, and don't pet it. Instead, ask it what it's doing to help out around the house. Communists do nothing, because they expect everything to be done for them. They know that if they just lie around, they will be taken care of eventually.

This should not be the case with your pup. Reward your dog for any extra activity and feed it when it has accomplished something. For example, seizing the neighbors' fugly cat and tearing it to bits. Dogs who receive nothing for doing nothing will become accustomed to this, and will actually start to think it's the right way. Just like Commies.

One the simplest and most accurate ways to tell if your dog is a Commie, is knowing where it's from. The traditions and values of your dog's native country are probably still ingrained.

Here are specific breeds to watch out for:

"I could bang on this drum all day…"Keep your dog clean. Emphasize the benefits of canine hygiene to your dog and bathe it regularly. Otherwise, your dog may get comfortable being dirty. Communists have little concern for their hygiene and rarely take showers. Habits to look out for include rolling around in dirt, pooping on the ground, and hanging out in drum circles. These are all frequent habits of communist youth in American colleges. Your dog may enjoy having a long, shaggy coat of fur, but don't hesitate to grab your clippers and give your dog a high and tight. Praise it for ostracizing dirty, disgusting dogs, and make sure your pet's canine companions share these clean-cut grooming habits.

Hopefully after reading this you have become more aware of the threat of communism in your own home. While it's important to have a loving relationship with your dog, it's equally important that your dog shares your values. Keep it from idolizing dogs in leftist Hollywood films, do not let it play with toys made in China, and support free-market capitalism by inspiring your dog to earn its keep in your house. There are no handouts in life, so do not feed your dog scraps. A long, prosperous life can be had for your dog if it applies itself and works hard.

Most importantly, if your dog exhibits many communist qualities, such as unquestioned loyalty, submission, playfulness with other dogs, and lack of hygiene, do the right thing and put it down. After all, a dog should be a man's best friend, not freedom's worst enemy.

More Like This
5 Ways to Answer the Question, “But Where Are You Really From?”
Lavanya Vasudevan
Why I’ve Always Been a Bloomberg Supporter Since He Started Paying Me $6,000 a Month
Domenico Siravo
How to Apologize for Your Racist Dog
Brad Stennerson
Comedy Courses

Staring into the mirror, I say out loud, “You’re such an idiot. What are you doing with your life? Maybe you should just drive yourself into a river, call it a day.” Which is a terrible thing to say, and an even more unsettling thing for the Uber driver to hear.