Two lovers embrace in a pale moonlight that falls over their curves and retreats from the sharp advances of the looming shadows. Their bodies meld into one with limbs entwining, and every cell aching to be close to its counterpart. Hands courageously become explorers on the high seas of sex. They lead the way for the rest to enjoy the flesh feast. Buttons are unfastened, comforting strokes ease the setting, erogenous nerves are teased and fired at abandon. The light and shadows dance and quarrel on the writhing frames, sneaking their way into places that would cause breathy moans if the hands were to follow.

Yet another battle of light against dark ensues within the mind. The armies of guilt and purity steady their ranks against the onslaught of perversion and tingly rub-feelings. Just when the glowing star of raw sexuality is about to go supernova, one of the figures breaks his tongue free long enough to gasp, “Wait…I’m a virgin.”

So there you are in the movie theater with your date, maybe watching The 40-Year Old Virgin, thinking about how great her breasts look in that flickering blue glow. In that instant of simultaneous desire and restraint, you are at the epitome of your virgin status, wanting to have your cake and eat it too.

And wanting to eat her cake too, and putting on a 6-year-old’s grin with her frosting all over your face…. If you know what I’m saying.

I’m saying you should have lost your virginity at age 6. 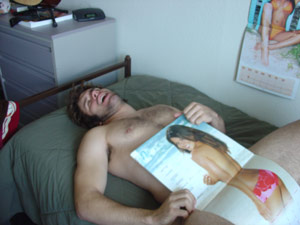 When it gets this bad, you might as well sacrifice yourself to a volcano.

The hardest part about virginity, believe it or not, is not the lack of sex… or the morning wood. We all spend the first decade of our lives naïve to the entire concept of sex. The next five years we learn, and giggle, but our experience ends when the presence of another partner begins. If one’s sexual history was a road, the first fifteen years would be a trek through hot, wet, dense jungle foliage where only after much whacking do you reach any sign of civilization. That sign says “Beat it,” and thus begins your journey down the lonely gravel road of gratification. You tell everyone it’s a six-lane highway, but we all know you’re driving a 4-speed.

The most frustrating part of virginity is the face of mixed surprise, pity, laughter, and condescension on all your friends' faces. I wouldn’t really call them friends however, because try as they may to improve your situation, they never do. They all assume the responsibility of getting you laid, without really caring how you feel, or who you feel. Some people can’t comprehend why you wouldn’t have sex. They begin to wonder what’s wrong with you. You become the hot topic, spreading like wild fire and not women’s legs, until you try asking someone out and they reject you because of your big fat flawed Virgin reputation. The irony of the situation is enough to make you scream.

But not someone’s name in the middle of the night…you’re not having sex.

More like not having it at all. The decision to not have sex is a complex one. For all your noble reasoning and grand moral schematics, there are times when you seriously doubt your Resolve…because there are stains in the carpet and it’s not getting them out. There are also times when it’s not really your decision at all. The lady often has an opinion on the matter. Common stances include pity-giggling at your attempt, citing that popping your cherry would be weird, and the stance where she juts her hip out and glares that you even made such a bold suggestion. At this point you pick up your values and pants so carelessly tossed to the floor, and say you’re glad that you didn’t make a huge mistake tonight. But not too loudly, you don’t want to wake up the part of you that is still dreaming. Really hot, sultry dreams too, the kind that start in the bedroom and spread all over the house until it is a raging inferno. The fire department then hoses down your fantasy until only a smoldering ashen frame remains. That’s where the term wet dream came from actually, also the term “Big macho fireman with huge hoses.” It might be time to coin the term “That is not charcoal on my penis.”

Really it is though, because your art teacher said shading would give it more depth.

The initial reason for abstaining is usually one of preserving your self worth. You don’t want to go at it too soon and earn yourself nasty labels. Sex is supposed to be a wondrous experience that you have when you’re ready. Pretty soon your stock is rising, and you’re feeling the effects of the bull market. So you grab that sucker by the horns and take him for an 8-second joyride. The investors aren’t calling though; must be a problem with their interest rate. You figured by saving that your assets would mature. You’ve got excess supply with no demand. You were holding out to cash in for a long-term bond, but now in the recession you realize you missed out on the boom time.

With each year it becomes harder to remind yourself why you’re waiting. At times you just want to get it over with…and under with and in the laundry room with a girl hopefully without the extra belly width. There is the fear that your lack of experience alone will drive some girls away. You assure yourself that not all girls care about sex. Then you remember that they are the fucking prude virgins who won’t give you any play. So many forces are pulling you every which way. Aside from societal pressure, there’s internal pressure as well…such as your blood pressure. Those are some bulgy veins my friend. How are you supposed to know if you’re ready? Part of you says you’ve waited this long, don’t blow it now. The other part of you is really long, and doesn’t care who blows it. It seems the only solution is to just do whatever feels natural…like that girl’s rack for instance.

Or that cantaloupe if you’re fruity.

Girl: A lot of guys flip out when they discover I’m a virgin.
Mikey: Hey, so am I, no biggie.
Girl: Really! That’s crazy, I didn’t know there were any of our kind left.
Mikey: I know we really are a dying breed. I just don’t see why people want to rush something so special.
Girl: Wow this really is perfect.
Mikey: Yea.
(pause)
Mikey: So are we gonna—
Girl: Christ, I thought you’d never ask.

I don’t usually think robots are capable of true evil, but sometimes when I’m waving my hand frantically trying to get a paper towel dispenser to work, I can almost hear it saying “dance for it, stupid girl!”