Never before has another man's flatulence so offended me. Last Friday lunchtime I was waiting for the elevator at work—a fancy glass elevator no less. I know what you're thinking: someone passed gas in the elevator and it was an unpleasant journey. In essence yes, that is what happened. However, such simple words do little justice to a fume so noxious it could wake up the comatose, before killing them.

It smelt worse than a fire in a wig factory. Worse than a manure truck parked in the sun. At 1:20 pm precisely, I saw a rotund gentleman descend several floors before the elevator stopped at the lobby. He was slightly balding, wearing a gray suit. There was nothing about his outward appearance that suggested he had a sphincter Satan uses as a second home.

The elevator doors opened and he scurried out, looking down at his shoes. The look on his face can best be described as anguished. I suppose it was appropriate to avoid eye contact because there's no glance you can share that offers the appropriate level of apology. There is no fleeting squint, no blink, and no flutter of eyelashes that comes close to the handwritten apology that would be required for opening such a sewage plant in a confined space. 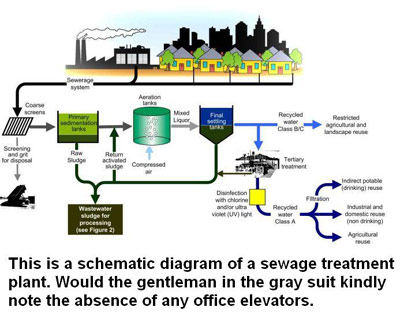 I skipped into the elevator with all the joys of a bunny in the summer fields. No sooner had the doors started to close than my nostrils began to quiver like the same rabbit smelling the landfill he'd just skipped onto. Time slowed down. Sweet mother of mercy. The last thing I remember hearing was my own voice "D…a…m…n…! W…h…a…t d…i…d… y…o..u… e…a…t… … … ?"

It was like a cumulus cloud of fetid tripe. It smelt worse than a fire in a wig factory. Worse than a manure truck parked in the sun. Honestly, it was worse than the Mummy's tennis shorts. That smell will outlast governments. I only imagine what the people in the lobby thought as they saw me clawing up the glass over a seven floor journey. Why is he eating his own face?

With as few breaths as possible I made it to floor seven. Red-faced but panting, I readied myself to breath a sigh of relief as the doors opened once again. Precious escape! But no! No! NO! Why is this the exact time when the receptionist (and office gossip) decides to get lunch? She'll think it's me, her red-faced panting colleague. I wanted to say something, to explain, to let her know that nothing so hideous could possibly come out of me.

But what could I say? What glance could I possibly offer her to explain so much in so few passing milliseconds? Instead I just looked at my shoes and scurried past. I heard a peep as the doors began to close on her. My back stiffened and I rushed back to my desk to eat lunch and pretend that the office wouldn't have a new nickname for me by 2pm.

Until next time,
Brown Pants

P.S. No receptionists were harmed during the writing of this post. Except one.