What is the Best Remedy for Dealing with VD?

Guys, if you care about sex, don't blow Valentine's Day.

Around this time of year we often hear about how Valentine's Day is a commercialized Hallmark holiday manufactured to sell greeting cards and blah blah blah, just shut the hell up. If there is one thing that men whine and bitch about most of all, it's that they don't know what women want or that they aren't getting enough sex. Well here's a day where minimal effort can make the woman in your life feel loved and appreciated, thus giving them exactly what they want, which invariably leads to a night of sex. 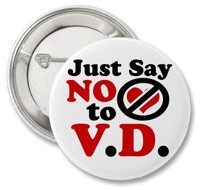 Abstinence is really the only sure way to avoid it altogether.Hell, you don't even have to remember this day, it's already marked on your calendar for you. Even if it wasn't pre-marked in every calendar, in the current era of Google Calendar, email reminders, and cell phone alarm notifications, you really don't have a good excuse to ignore this date other than just knowingly being a complete asshole.

Look, I get it though, you've recently had the Super Bowl on your mind, with all these men tackling each other, hugging after plays, and patting each other on the ass, so it's really hard to tear your mind away from all that masculine energy and actually think about a woman for a change. No, actually that's horse shit, I don't get that at all really, but then I'm actually straight, so I guess I don't find it that hard to think about a woman every single day, let alone ONE day a year. Maybe you guys missed something along the way, but women are NOT as complicated as you think they are. Women just want to feel loved, cared about, and appreciated, which when you take your mind off of that tight end, wide receiver, or all those guys making passes at each other, just for a second, really isn't that hard to pull off. Especially this time of the year where just about every store you walk into reminds you that Valentine's Day is around the corner. 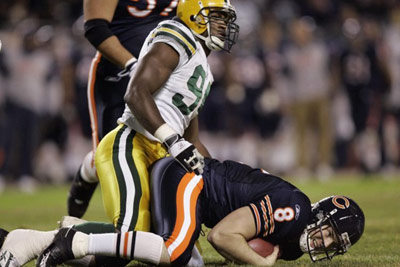 So exactly what about this isn't totally gay?

Honestly, I don't give a shit if it IS a contrived holiday!

So please tell me, what good reason could a man possibly have to actively avoid such an easy avenue for making a woman want to jump his bones, unless of course he really wasn't that interested in a woman jumping his bones in the first place? Seriously, women really don't need some grand gesture in order to get their engines started when it comes to sex (yes, I'm using car metaphors now so you can understand what I'm even talking about), they really just want to know that you care. If you put half as much energy into showing a woman that you actually gave a shit, as the amount of energy you put into your cars or fantasy football (seriously? You fantasize about football too?!) then you would be getting laid right and left, instead of wasting your time trying to convince the world how much your woman isn't into sex as much as you are. 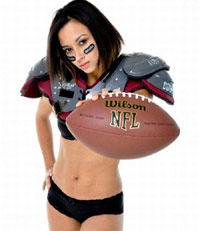 I seriously thought this is what fantasy football meant until someone explained it to me.

So by far the best remedy for dealing with V.D. is to embrace it confidently, with full force, and it will surely lead to a much richer, more fulfilled sex life. Show the woman in your life that you care enough to give her the very best V.D. she's ever had. With that said, I'd like to take this moment to dedicate the following song to all the ladies of the world, which granted, given the title of the song seems oddly redundant. Oh and I didn't write it, but just remember though, on Valentine's Day, even giving something that someone else wrote is enough to show women everywhere that you actually care enough to get laid. Besides, if you don't care she'll totally think you're gay, which, let's face it, if you would rather watch men running around playing football than put any kind of effort into having sex with a woman, you probably are.

Related
Lyndon B. Johnson Addresses Congress Regarding John F. Kennedy Going Away to a Farm Upstate
Jake Bettermann
Playing With Cash at Online Casinos: Where to Put Your Notes and Coins
Jacob Knowles
Terrifying Profiles on Your College’s Alumni Website
Noah Cohen-Greenberg
Resources

Lyndon B. Johnson Addresses Congress Regarding John F. Kennedy Going Away to a Farm Upstate
Jake Bettermann
Terrifying Profiles on Your College’s Alumni Website
Noah Cohen-Greenberg
I Really Shouldn’t Have Worn a Suit on This Camping Trip
Eli Burnstein
So I Hear You Know Photoshop
Rochelle Elana Fisher