Satire In The Trump Years: The Best Of The Halfway Post

Follow The Halfway Post on a hilarious stroll through the infamous absurdities of the Trump years, and enjoy a liberal supply of comedy and caricature.

Donald Trump’s depraved, unquenchable thirst for gauche iconification made him a demagogic savior for an electorally declining conservative movement absorbed in an insular, persecution-complexed zeitgeist of xenophobia and ends-justify-the-means political villainy.

Satire In The Trump Years mocks all of that with savage humor, and Dash MacIntyre's collection of satire and parody caricatures of the Trump family and administration, Trump's Congressional sycophants and enablers, MAGA racists, right-wing media, the Religious Right, gun nuts, police brutality, and many more deserving subjects.

Dash MacIntyre on Points in Case – Dash MacIntyre is a satirist from St. Louis. He founded The Halfway Post in the summer of 2017 to craft little doses of comedic catharsis throughout the village idiot reign of Donald Trump he compiled into the book “Satire In The Trump Years: The Best Of The Halfway Post.”

“The Halfway Post eternally keeps me laughing. And when I laugh, I have to say my whole body laughs with me! Yes, I'm a fan. I believe this guy, Dash MacIntyre, had to outdo the Trump Era by being so much more outrageous and ridiculous than the 2016 to 2000 dumpster fire in the White House. But still, Dash goes beyond, waaaay off into a wacky universe of hilarious topics. The best remarks are from people who actually believe his fabulous fibs. Get it here and find him on Twitter. You won't be sorry!”
— Rosemary Sneeringer

“I have enjoyed the Halfway post on Twitter for several years now. Reading this book helps me appreciate what a help this Twitter feed was in getting me through the crazy Trump years. If you’re a resister don’t hesitate! This book belongs in your digital library! Go cat go!”
—John Maddog

“You read it and it almost sounds true. You let it sink in just enough, and then you're laughing. e.g., “Trump Gave Barron A Signed Portrait of Himself for Christmas.” Hilarious stuff.”
—DK 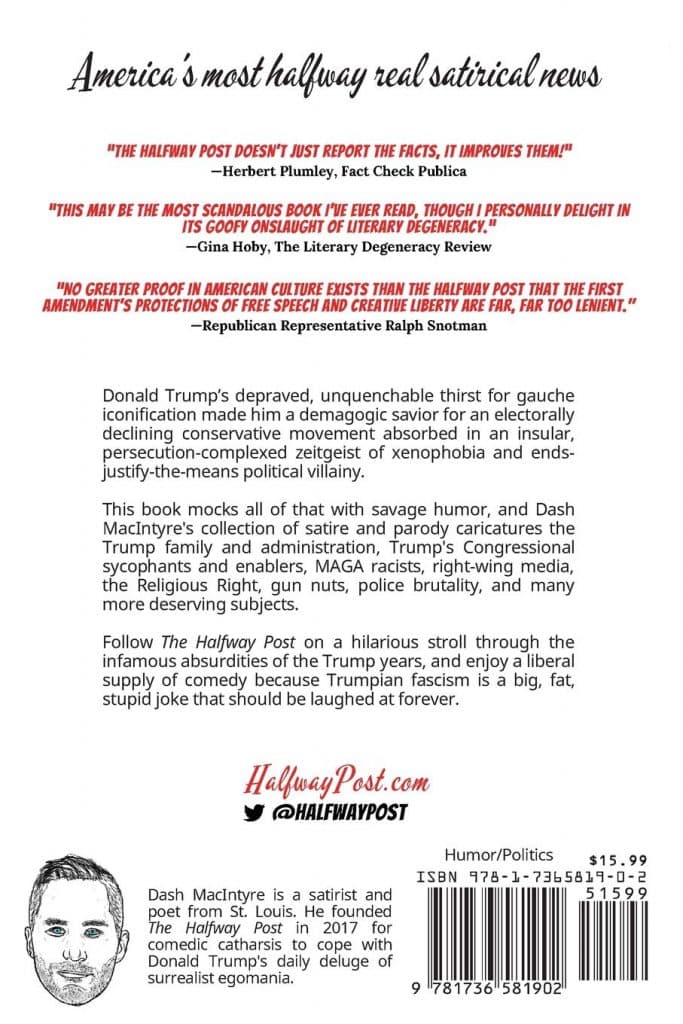