Lingeria: Book One of One

Enter LINGERIA, a fantastical world of fantasy! But there is one problem – Lingeria shouldn’t exist. It is just the product of acclaimed, and depressed, author Norman Halliday's imagination.

LINGERIA: A wondrous world of centaurs, goblins, elves, knights, bounty hunters, giant centipedes, angry bookies, four-armed Yetis, and one wizard. But there is a problem – Lingeria shouldn’t exist. It is the product of acclaimed, and depressed, author Norman Halliday.

So, how did Norman come to be sleeping on the couch of one of his fictional characters? And why are Norman’s novels revered as Lingerian scripture? Also, why does all of Lingeria think Norman is God? Actually, a better question is… Who is this cruel wizard, about whom Norman never wrote, that seized power over the land? But first we should probably do something about that giant black cloud that sucks the life out of everything it passes over.

Okay, so there is more than one problem.

Joining Norman to untangle the mess that Lingeria has become is a lonely runt named Roe; Tahra, a moody mercenary; an anonymous goblin; and a blind librarian. With heroes like these, stopping Lingeria from being wiped out of existence should be as easy as fighting a hairless sewer ape.

Daniel Kozuh on Points in Case – Daniel Kozuh is a comedy writer living in Atlanta by way of Chicago.

As a screenwriter Daniel has been commissioned by several film and television production companies. His short films have shown at festivals and his science-fiction play Adipocere was produced by LiveWire Chicago Theatre. His last short film Late Again played at the Terminus Film Festival. He has also written for the Alternative Press Music Awards, Metal Insider, SFWeekly, among others.

Currently, Daniel writes for the music satire site The Hard Times and its “nerd culture” sister site The Hard Drive, where he has published over 150 articles. One of his articles was adapted into the short film Caravan of Cannibals that screened at the 2018 Atlanta Underground Film Festival and the 2018 Atlanta Horror Film Festival. His headlines have been featured in The Los Angeles Daily News and Billboard Magazine.

Daniel has performed with the acclaimed storytelling series “The Moth,” winning their monthly StorySlam and performing at their yearly GrandSlam. As well as working with PAVE-Promoting Awareness Victim Empowerment, the musician BESTMAN, and various nonprofit theater groups. The podcasts Hysteria 51, Name Redacted, POD Minutes to CASTnight, and Earth Station One have also had Daniel on as a guest. More recently he started hosting the improv comedy podcast “The Extramundane with Max Ward” and had a short story published in Infinite Worlds Magazine.

“This book takes every fantasy expectation, turns it upside down, and shakes its pockets for loose change. I highly recommend this one.”
–The Witty and Sarcastic Bookclub

“It's hard to believe this is a debut novel! I smiled through the entire process of reading this book. The author has nailed the caricature of an alcoholic fantasy novelist who's grown to hate his own creation… I think you'll be pleasantly surprised by this one and I hope a sequel is forthcoming!”
–Chet Sandberg, author of the Norse Gods and Monsters series

“Lingeria is a sarcastic, humor infused take on the portal fantasy, which forces the author of a beloved fantasy series into the world that he's written – and come to despise. It's a solidly entertaining book which appropriately skewers a lot of the tropes of fantasy fiction and the associated fandom. I enjoyed the world of Lingeria and it's definitely a fun read.”
–G.M. Nair, author of the Duckett & Dyer series

“This book had me in absolute stitches. From the subtle (and not so subtle) nods to the best in the genre to the main character's gradual evolution as he grapples with the consequences of his own creation, this story just kept surprising me in new ways.”
–GoodReads Review

“I found myself eager to go back and find out what would happen next. It was funny and sweet and felt like a Choose Your Own Adventure book gone awry.”
–GoodReads Review

“Lingeria expertly merged fantastical worlds and characters with a genuinely human protagonist. The adventure and excitement of an epic quest with the emotional journey of a relatable and rich hero. I loved this so much and constantly recommend it to everyone I know!”
–GoodReads Review 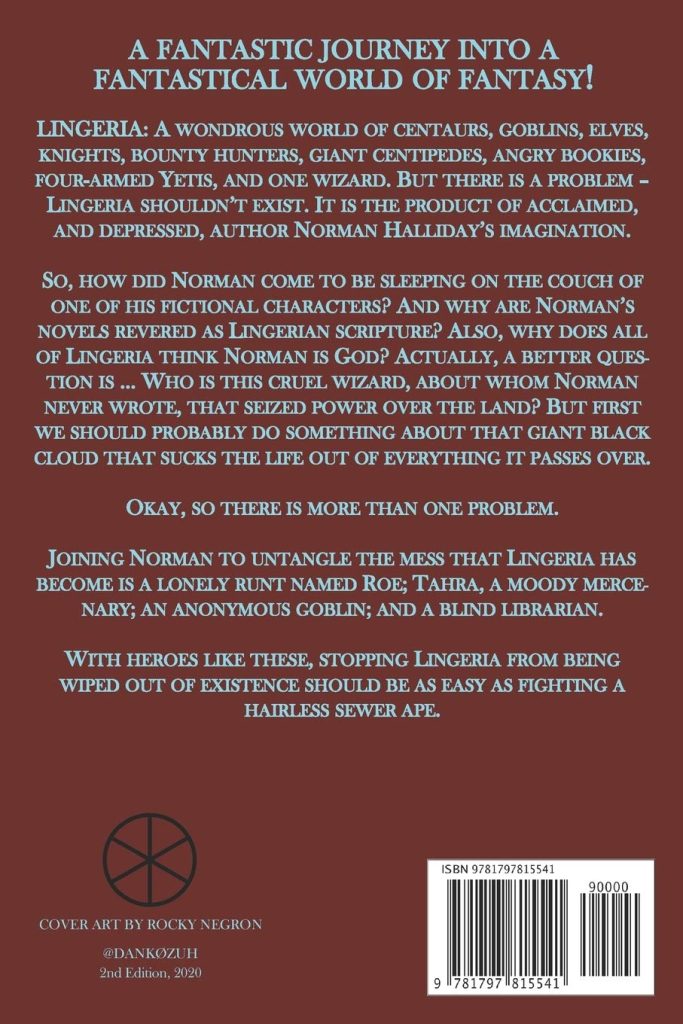