Why I Have an American Man Crush on Canada

It's all the little things, like warm Molson Ice and free healthcare that lend the charm.

Distressingly, some Americans, as well as employees of Buzzfeed (a "feed"), have just as much difficulty identifying the U.S.'s "51st state" (that is, Canada) as they have identifying their own country, the name of which I'm blanking on. Is this surprising, given the percentage of whatever-country-we're-living-in's citizens who can't even find their own friggin' country on a map? Let's not forget this "study" only included Buzzfeed employees, when it's known that said employees are barely literate and probably can't even spell "mapes" without help from Spellchock. Oh crape.

In Canada, the government doesn't require that people buy for-profit things like health insurance, and instead provides free health coverage to all citizens, therefore making it communist. This, of course, means that any American who could identify Canada is probably al-Qaeda. Also, Canadians have managed to not be "U.S. fat," despite access to Tim Horton's, happy meals, maple syrup, and cold, refreshing beer out of their kitchen tap, as required by law. That place is sweet. 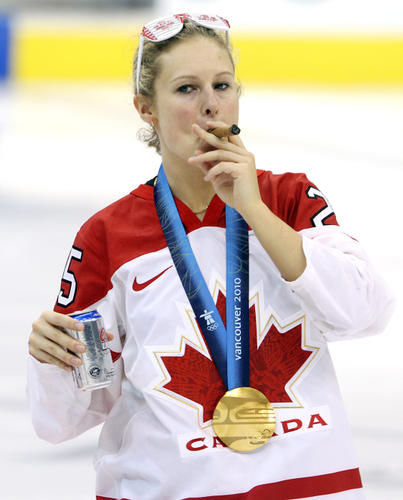 I have to say, as a U.S. citizen, I have been told I'm more Canadian than most Canadians. That's because I have a crush, basically, on Canada as a whole. I mean, just the hockey, you can stop there. I honeymooned in Toronto in April—not even one of the warm months. The Hockey Hall of Fame is Mecca for me…the Hall of Trophies is basically a cathedral. I love the city, the transportation…everything. Oh! I've seen hockey games in both Maple Leaf Gardens and the Montreal Forum—less hockey arenas and more, well…temples. I've spent lots of time in Montreal and for people who say Le Habitants are not helpful or polite, may I give this wisdom: don't be a dick and you won't be treated like one. In other words, they're as nice as anyone you'd encounter. My grandparents lived in Three Hills, Alberta…do I have to even tell you it's a pretty rural place? The name smacks of rural. And I spent awesome summers up there. I got Canadian cred coming out my hockey puck. So it dismays me that even the most high-school edumacated of American youths don't even know about our northern neighbor.

For all the U.S. high school graduates (which is all public high school graduates) who don't know that "America" features more than one country, may I present, Canada. Canada (the world's second biggest country) has three cities: Toronto, Vancouver, and Montreal; and two official languages: French, and what Canadians call "Maple Leafs English." For instance, the phrase "Go Leafs, eh" simultaneously means both "Where is the bathroom?" and "I need a beer." The U.S.—once again firmly showing its fallen place from the "Gold" group to the "Brown" group, the group whose members cannot have sharp scissors or pencils—has no official language at all. We don't even want to admit we speak English, as it might offend present and future residents who don't have documentation, which is illegal.

Canada's main exports are wind, geese who shit constantly but only on golf courses, and overly-polite white people. Canada's main imports are American tourists looking to gamble (either in casinos or via the Canadian Pharmacy) or buy Cuban cigars that they can stick up their butts and smuggle across the border or visit the "Canadian Ballet", which features metal poles. And "dancers." Sure they are. If you're an American and you want free healthcare, you could do worse than try to get through the Canadian border, illegally (I'm sorry, I mean…sans documentation), and try to get asylum. The way to do that is to make your way straight to Toronto and to the Hockey Hall of Fame, which is their Capital building and embassy. There, you will be served warm, Tim Horton's doughnuts and Molson Ice, as is the tradition. You will learn about The Maple Leafs, The Great One and the Queen, and, finally, you will be declared a citizen of Canada, upon which you'll get your tattoo of a friggin' leaf.

Canada is not perfect; it does have its own issues, the primary one being that not enough famous people have lived in Canada to grace all its currency, requiring certain coins to feature ducks. Seriously, all Canadian currency features either the English Monarchy, Canadian wildlife, or both. I'm thinking if I'm a Prime Minister in Canada, I'm getting kind of pissed. I mean, a PM is like a President, isn't it? I'm not sure; I didn't have time to get to the Capital building in Toronto. At the very least, you could put Wayne Gretzky on the C-note (or its metric equivalent), given he's Canada's King.

Of course, Canada's football is hockey, a sport that will never fully make it in the U.S. because you can have gameplay for five to six minutes straight, and that doesn't work with our Xbox-ADD-PS3 generation. This clearly exceeds the attentional resources of most U.S. citizens and deprives them of natural breaks wherein they can get more beer. I'm not sure why—the Canadians seem to drink enough. Contrast this with baseball, where the entire game is one ginormous beer break.

The only problem with hockey is that a Canadian sport is being run by an American who happens to also be a lawyer, meaning that the stoopid© runs strong through the blood. In case you're reading this article hundreds of years from now, perhaps as required reading in the finest of graduate schools, but also Yale, know that this person is named Gary Bettman. I'd like to personally thank Gary for his contributions to hockey, preferably while he's sleeping. We call him "Buttman" in what I am sure is comedy gold in a land of wood and tundra. There's a lot of tundra in Canada, have you noticed that? Like the Yukon Territories, which is a real place and not a Looney Tunes character. All tundra, bereft of non-tundra features. Seriously, you gotta come see the tundra.

One of the more fascinating things about Canada is its unhealthy obsession with that helicopter parent, the Queen of England. It's always "Save the Queen" this or "Bless the Queen" that. This is all despite an entire ocean between them and England. In fact, one of Canada's most expansive parking lots—stretching from Toronto to Vancouver—is actually named the "Queen Elizabeth Way." As many ways as the U.S. could improve, at least we're not pining for the Queen. In the capital, Toronto, there is the National Hockey League Hall of Fame. Every Canadian must make the once-in-a-lifetime trek to the HHoF, or when they die their souls will have nothing to drink but Bud Light and no hockey to watch but the Colorado Avalanche. Basically, I'm describing Canadian purgatory.

Because of my love of hockey and all things Canadian (except their bacon, which is just ham), I made a trek through the three Canadian cities, starting in Vancouver and ending in Canada's capital city, Toronto. There, I visited the Hockey Hall of Fame "slash" Capital Building "slash" embassy, where I actually kissed the Stanley Cup and therefore became a Canadian citizen. Quickly realizing what I just did, I entered myself into Canada's healthcare system for a pre-emptive dose of penicillin. Who knows, I may have kissed the MRSA Cup for all I knew. One of the more interesting features in the HHoF is a full-scale replica of the Montreal Canadiens' dressing room. You can actually look at the exact spot where Patrick Roy let the Detroit Red Wings bury themselves inextricably inside his head, forever and ever. It's glorious. Now I realize I'm evil incarnate for liking the Detroit Red Wings but this is just between me and you.

Canada is a good place to learn things about yourself. One thing I learned about myself is that I cannot speak, nor infer, French. I learned this while in Montreal, trying to park on a side street. I parked right underneath a sign that apparently did have something to do with parking, I could tell that much. After staring at it hard for about 10 minutes, I satisfied myself that I was totally legal, and walked away. I returned to find out that I didn't know French at all, evidenced by the parking ticket on my windshield. At that point I realized how daft and/or ballsy I must have looked. Anybody watching me from their window would simply see someone park right underneath a "No Parking" sign, stare at said sign for 10 minutes, shake his head "yes" as if there were an audience, and walk away. The police must have thought I had a pair of 10 kilogram brass balls, parking almost purposefully right underneath what essentially was a "No Parking" sign. Maybe they thought I was in the Brown group. And yet given access to a car…sheesh.

From that experience I found another thing I really like about Canada: its honesty. By this, I mean that to pay my parking ticket, I didn't have to go to a courthouse or police station, I just had to go to the bank! Any bank! The message here is that parking and other tickets are strictly about revenue. In the U.S., they try and convince you that it's about "safety." To me, the safest kind of car is a parked car. In Canada, it's much more like, "Haha, you can't speak French, now give us some money." I have to respect that.

The last thing to note about Canada is its alarming lack of violence. As an ex-Chicagoan, it is very difficult to get to sleep without the sound of background gunfire, which Chicagoans call "ambient noise." The reason, of course, for Canada's lack of crime is their 13-month winter. The populace isn't peaceful, it's freakin' cold. It's just better to stay inside and watch the Leafs, eh. This weather-related suppression of violence is the reason hockey has fighting; it's the need to live vicariously. Americans don't have this issue, which is why the MLB, NBA and NFL say they have fighting, but instead have sissy-slap-fests (SSFs). There is nothing more ridiculous and effete as watching a professional baseball player try to "fight" an opponent. It makes you feel like buying a purse, or maybe some heels. In contrast, hockey fights demand a fresh beer and maybe a couple of donuts, eh. And get me some wings, woman!

Related
Some of the Ways I Have Prevented George R.R. Martin From Finishing “The Winds of Winter”
Thomas Batten
My Only Regret is That I Have But 96 Lives Per Day to Give For My Country by Wayne LaPierre
Mike Langley
Why You Have a Hard-On for Fantasy Football
Jerry Landry
Resources