Hey bro, I see you're shopping for a new shirt…sweet. What's that, you've moved on from wearing colorful shirts with seagulls on them and want to appear more masculine? Yeah I know what you mean, it's time to get something classier and tastefu– oh, you're getting an Ed Hardy shirt? Well in that case let me congratulate you on this new chapter in your life, one filled with glitter, embroidery, and fucking girls who like shiny objects (that's you).

I know what you're saying, picking out clothes is super-hard. We're not talking regular everyday clothes, were talking about a shirt that's going to get you some action when you head out for the night. What better way to show the opposite sex that you're a thoughtful and smart guy than by dropping $300 on a bejeweled shirt with the same design as a Hell's Angels gang tattoo, complete with snake crawling through skull?

Yeah I guess you're right, dude, you don't want girls to think that you're all…imptelligent and shit, you just want to give the bitches an excuse to touch your six-pack abs. In which case, this is the perfect shirt for you and there are plenty of reasons why you'd buy one: 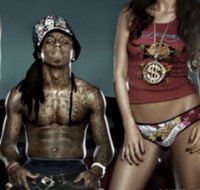 You can take off the shirt, but you can't shake the regret.So now that we're clear on your intentions when buying this garment, we're going to need to re-tool your lifestyle to match these new threads. First things first: hit something. It doesn't matter what it is: the punching bag in your basement, that area of your wall that probably doesn't have a stud behind it, a stray kitten who's looking at you funny, anything really. You see, once you put this shirt on, you're going to start hitting things all around you whether you like it or not. That's just what the shirt turns you into; it's out of your control.

Now that you've broken (in) your knuckles, it's time to work on your mind. Reading: stop it. Stop reading everything but bodybuilding forums and Facebook statuses. You'll want to be as oafish as possible so that there's no way you can accidentally say something intelligent when talking to people and ruin this persona you've worked so hard to create. 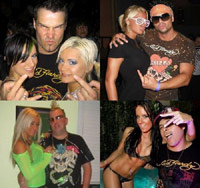 Tricks of the d'bag trade.Last but not least, you'll want to do some work on your body. What do you eat for breakfast? If the answer isn't steroids then you're doing it wrong. You need to juice yourself up so that not only will your veins pop, but we'll be able to see each individual blood cell pass through your body and into your cold beating heart.

Got it? Cool, now go enjoy your shirt….douchebag.