Everybody likes cheese. The Queen of England likes cheese. Jesus and Muhammad liked cheese, too, and, in fact, they even shared a piece one fine summer's day back in the 80's. Even Michael Caine likes cheese. Cheese is what makes the world go ‘round. Lack of cheese is what has caused all of these problems in the Middle East, and, to the best of my knowledge, lack of cheese, stilton in particular, is what caused the global economic crisis.

The Great Depression of the 1930's? Yep, you guessed it—lack of cheese. In fact, take any crisis of any kind in the history of the universe and you will find that even if lack of cheese isn't the primary factor, it had some kind of supporting role.

Cheese is a wonderful thing. It's essentially milk that has been left for a while, but its range of tastes—all the way from slightly cheese tasting and very cheese tasting—are exceptional, and no man, especially no Englishman, can ever truly call himself a man unless he enjoys a bit of cheese. Some call it the yellow fruit. Some call it the holy friend of ham. Most call it cheese; and all love it, apart from Nazis and terrorists.

The Invention of Cheese

Cheese was invented some time ago in the 1950's by a man known as David Badiel. Young David was only twenty at the time and was making a hard living out of fish mongering. Then, one fine afternoon, his mother asked him to fetch some milk to put in her tea. Historians believe she said something like this:

"Badiel, fetch some milk for my tea."

This roughly translates into, "Will you get me some milk for my tea, bonny lad?" although this is disputed amongst language experts, linguists, and accountants.

After his mother requested the milk, Badiel had to go and milk a cow (the bottle had not yet been invented, nor had the fridge). After milking the cow for somewhere around four days, young David hastily returned to the house, holding very carefully onto his hat, within which he had decided to store the pint of milk.

Upon returning to the house and entering the kitchen, he found his mother lying dead on the floor—she had died of lack of milk. It was in this very moment that young David decided to make milk better, and the very first thing he did after seeing his mother's body was go outside and place the milk on the floor, leaving it there in between two large moles. 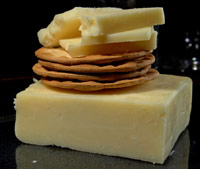 "You owe EVERYTHING to us, stupid cracker!!"David waited and waited, desperately hoping his experiment would create results. On the first day, David left the house and found it was still milk, so he spent the rest of the day reading; on the second day, he left the house, and, finding it was still milk, returned to the house once more to read for the rest of the day; on the third day, David remembered he had left his mother's corpse in the kitchen and arranged a cheap cremation. It was the fourth day, on June 14th—a day now known as Cheese Day—that David left his house and found a big block of cheddar. Upon seeing the cheddar, he hastily invented the cracker, and the rest is history… a history I will now delve into.

The Development of Cheese

It was the 1960's, a time known for rebellion and freedom—the age of the hippies. A phrase of the time that defined the era is widely mistook for being "Free Love"; however, the real term was "Free Cheese" and it was from this term that the hippies drew their entire lifestyle.

Related
Without Cream Cheese, the Country Will Fall
Alex O'Connor
When I Need to Handle International Crises, I Stay in a Lovely Trump Hotel
Donald J. Trump
What Your Zodiac Sign Says About Your Cheese Compatibility
Ben Morton
Resources