The Relationship Interview with Wesley Jansen

Spoiler: No love matches are made and your penis may hurt afterward.

Interviewer: Okay Mr. Jansen. I'm just going to ask you a few questions to see if we can match you with one of our female applicants. Just relax and give honest responses.

QUESTION #1: To ensure the stability of a relationship between a man and a woman, it is necessary for one or both partners to have a serious career. You say that you're a teacher. How seriously do you take your profession?

Wesley Jansen: I take my profession very seriously. It is my job as an educator to enlighten my students and to make sure that they develop into decent human beings as well as productive citizens. In order to do this, it is imperative that I serve as an adult role model for them.

In fact, when I was teaching in South Korea, I would often go out to the foreigner pubs on weekends to socialize with the other teachers. One night, in the hallway outside of an Irish pub called O'Briens, there were a bunch of drunken male teachers with their pants down, waving their penises at each other and at the hallway camera as many shocked and horrified Koreans walked by.

I got the subtle impression money was the only thing that prostitute cared about. And you know what gets me the most? I drank all that beer just for her benefit.   While this was happening, I thought to myself, "This is no way for professional teachers to behave. It is both shameful and highly unethical to be acting this way on the weekend. As authority figures and leaders in our students' lives, we must be morally and professionally upstanding…and this responsibility extends to our personal lives outside of the classroom as well."

So I pulled up my pants and I left.

QUESTION #2: For a relationship to stay strong, both partners need to have healthy and positive hobbies that make them feel good about themselves. What hobbies do you enjoy?

Wesley Jansen: Well, I don't really have much time for hobbies. In fact, by the time the teaching week is over, I'm usually too exhausted to do anything except drink excessive amounts of alcohol, say things I don't remember to people I don't know, urinate on random buildings in dark alleyways, get into traffic accidents on my scooter, drunk text people, drunk email people, occasionally destroy property, and cause embarrassing and irreversible hurricanes of social destruction.

But whenever I'm not doing those things, I usually spend lots of time and mental energy building up mass loads of psychotic, inconsolable, raging hatred against things that I have no control over…like people who say stupid phrases such as, "Hey, just be thankful you HAVE a job." To which I reply, "Hey, just be thankful I'm not a serial killer, because you'd be first on my list… you stupid cocksucker!"

I've had my fair share of shitty jobs, and I can honestly say that most jobs are fucking meaningless anyway. Most of them are worthless positions of caste-like servitude that mentally and physically break down the employee… all in the name of making somebody else richer. They offer no benefits and no chances for advancement to a better life. All a job does is physically exhaust you and make you mentally retarded if you work at it for too many years.

So if you want me to be thankful that I have a job, or as I call it, a "position among the damned," then I suggest that you get on your knees and "position" yourself between my legs; I've got a "job" for you.

Interviewer: UMMMM… OKAY…. Let's move on to the next question:

QUESTION #3: How would you respond to the following question from a woman: "I am not simply looking for a boyfriend, I want a partner who understands what intimacy is. What have you learned about intimacy from your previous relationships?"

However, she started to complain I was taking too long, and that really ruined my mood. I'd have to say that I went away a little bit disappointed. I felt that I had contributed as much as I could, but she didn't even meet me halfway. All she did was complain; she didn't even "pretend" to enjoy it. Needless to say, I got the subtle impression money was the only thing that prostitute cared about. And you know what gets me the most? I drank all that beer just for her benefit.

QUESTION #4: How would you respond to the following statements from a woman: "I don't want my partner to take it for granted that we are together. I am only willing to invest my emotions in a man who will understand my feelings, support me, and play an equal role in helping our relationship grow. Much of my happiness depends not simply on establishing a relationship, but on building that relationship emotionally."

Interviewer: Okay… Mr. Jansen, so far your answers to my questions have been disturbing and sick to say the least. I can honestly say that you are an attractive-looking man, but so far you're giving me the impression that you are either a useless, drunken pervert in need of extensive therapy, or you're just plain hopeless when it comes to women. I'm going to ask you this next question, and I seriously hope you have a decent response….

QUESTION #5: How many girlfriends have you had, and what did you learn from those relationships?

Wesley Jansen: Well…it all depends on what you mean by "girlfriend." I mean, a word like "girlfriend" might mean different things to different people. For most people, I'm sure it means a significant partner to whom one is emotionally and intimately attached based on a relationship of mutual trust and understanding. But to me, the term has several definitions. To me, a "girlfriend" might be:

The street hooker who scammed me $90 for 10 minutes of really bad sex after I snuck out of a Taiwanese hospital to get drunk the day after shoulder surgery.

The drunk bar chick I screwed in an empty park down by the Mississippi River after drinking too much tequila…only to find myself driving over a curb and almost getting caught by the police before getting home and washing off my crotch with an old blue rag from 1986 that happened to be in the bottom drawer of my parents bathroom.

My pillow when I wake up really drunk and don't know what I'm doing.

So in those senses, well, I've had plenty of girlfriends.

Interviewer: Mr. Jansen, after a response like that, I honestly think that you are not only a horrible person with no values, but you are also pathetic… a rare combination considering most people are either one or the other. But since you have signed up for this interview, I am obligated to ask you one more question. After that, I would like you to leave.

QUESTION #6: Healthy relationships require that both partners are capable of facing and overcoming challenges. Name a challenge that you have faced and tell me how you overcame it.

Wesley Jansen: Overcoming challenges? Sure, I actually have a good story about this.

Wesley Jansen: Yes, this is a real event that I lived through—a heart-warming story demonstrating the vulnerability of a man.

Wesley Jansen: …and his penis.

Interviewer: Okay, Mr. Jansen, time's up, you can leave through the door on your—

Wesley Jansen: You see, when I was 18, I began to notice a continual pain near my left abdomen. Well, to make a long story short, I had a blood vessel wrapped around the ureter leading into my left kidney, which was causing a condition known as hydronephrosis. I had two kidney stones and I went through three kidney surgeries before the doctors figured it out. During each surgery, the doctors had to place a little wire in my kidney called a "stent" in order to keep it regulated. After 6 weeks, they had to pull the stent out…. Do you know how they pull out a stent?

Interviewer: ….Mr. Jansen, I want you to leave. I don't want to hear about—

Wesley Jansen: They pull it out through your penis. And because they don't want to put you to sleep for such a simple procedure, they have to do it when you're awake. Now…since I had three kidney surgeries, they had to do this to me three times. First, they get you spread eagle on a table with leg braces. Then they grab a little tube full of Vaseline, stick it into your penis hole, and shoot it into your penis. This is necessary to lube up the inside of your penis so that the large, flexible medical scope with grippers can be shoved into your penis hole, through the length of your penis, and into your insides….where the wire stent has been awaiting removal for the last six weeks.

Wesley Jansen: Needless to say, it doesn't feel very good when that giant scope is threaded through your penis and into your organs. It actually creates a hot, flash-type sensation that makes your penis feel like it's been penetrated by a hot needle and then stepped on by a flat metal boot.

Interviewer: …Mr. Jansen, I don't feel so well… I…

Wesley Jansen: So anyway, this procedure is only supposed to take 10 minutes. But the first and the third time they did it to me, they made mistakes…so it took HALF AN HOUR. You see, they had trouble gripping the end of the stent with the grippers, and as they pulled it out, the grippers would accidentally let go, causing the stent to become stuck numerous times on its path of destiny out of my penis. So they would take out the scope, inject more Vaseline, and then shove the scope back in again. When the stent was finally dragged out, ripping numerous blood vessels inside my penis along the way, it looked like a long, bloody, metal fishhook. The doc said, "Hey Wesley, do you want to see what we pulled out of you?" And I said, "Can I get my pants on first" ….AHAHAHAH!

Hey wait, where are you going? I'm not finished with my story yet…. 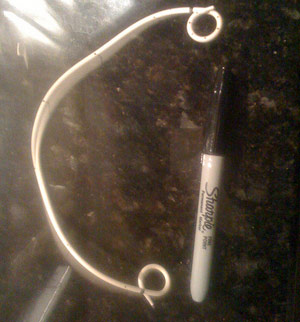 Related
5 Christmas Gifts to Get Your Beloved Without Violating the Restraining Order
Clayton Moore
Bumble Dates You Will Go Out With Only Once
Janna Mary Stein
How to Nail Your Next Job Interview Even Though the Return of Xwq, the Celestial Obliviator, is All You Can Think About
Alexandro Strauss
Resources