Political Correctness: A Gentleman's Discussion on How You Can Go Fuck Yourself

All races and religions welcome!

I could write an entire book on political correctness. Unfortunately, people don't read books anymore. Maybe if I put this message on a 30-second commercial during Honey Boo Boo, with a dubstep music bed and flashing bottles of Mountain Dew I could get the retards of America to pay attention for a moment though. In fact, I could probably do an entire trilogy on this particular subject, followed by a few prequels. But why ruin a legacy and bastardize something that has become legend by going back and fucking up its origin story. Right, George Lucas?

Just for clarity, I'm an atheist. I find religion to be for weak-minded people afraid of the fact that death is inevitable. Humans are by nature narcissistic, self-important creatures that need to feel that they have a purpose. Hence, religion. That's not what this rant is about though. We're here to talk about more important things than guys in the sky who watch me when I shower. We're talking about coffee. You know, real things.

It's 2013 and the general populace can't handle a lone digit? Real Housewives is an actual show that exists but we can't see a middle finger. Several years ago during the holiday season I was at the capitalistic devil known as Starbucks. I was searching for some gifts for some friends of mine and had decided on some fine coffee as a suitable present—fair trade coffee only, of course. On the shelf I found the usual Starbucks blends, alongside one called “Christmas Blend” and one called “Holiday Blend.” My curiosity was piqued and I asked a young lady at the establishment what the difference was. To which she replied, “Nothing. They're actually the exact same coffee.”

Now I was angry. I don't even celebrate Christmas or the holidays at all, and I was angry.

Looking back I feel sorry for the poor Starbucks employee who had to withstand my curtailed, 40-minute rant; it wasn't her fault. But this little snippet of American culture explains everything that is wrong with our country.

First of all, these are what we call “First World problems.” No one in Rwanda is bitching about what their coffee is called. They're slightly preoccupied with trite little issues like ethnic cleansing and AIDS. You know, that old “woe is me” song and dance. Don't worry, Bono will do another concert or something.

Second of all, who really fucking cares what it's called? This is what we're going to get up in arms about? Maybe it's because I'm lazy, but I'm one of those “I don't really give a shit” atheists, not the “all Christians can suck my dick” atheists. You want to be religious and it makes you feel better? Go nuts. As long as you're not trying to imprint your witchcraft on me and indoctrinate the youth into your cult, do as you please. When someone says “Merry Christmas” to me, I don't start frothing at the mouth and chanting pagan curses at them. Hell no, I'm American! I sue their ass for bullying and infringement on my religious freedom! Or maybe I just reply, “Merry Christmas to you too.” I know, it seems extreme, but that's how I roll.

I don't need to feel offended every time someone says “Christmas” to me just because that's not my thing. Like I said, I'm the type of atheist who doesn't give a shit. Christmas, Hanukkah, Kwanza, Winter Solstice, Festivus, whatever! It's just fucking coffee, people. You could call it “Prison Blend” for all I care. As long as it's good and it's coffee and it tastes like stolen manhood then I don't feel cheated. Why do we demand that people alter their whole lives and the way they talk just because some dick bag feels offended and needs something to make an issue out of? Their just simple words, let's not allow them to be so powerful. 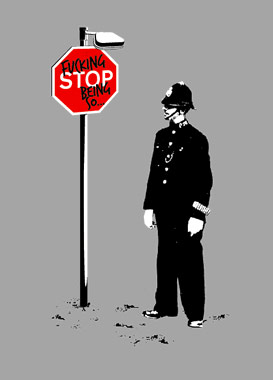 Our culture is ridiculous because we make certain words and gestures into so much of a big deal, that they actually take power from us. These things are only powerful because we allow them to be. For example, on TV you can't show someone flipping someone else off, because it's so offensive that we can't even see a middle finger. It's 2013 and the general populace can't handle a lone digit? Real Housewives is an actual show that exists but we can't see a finger.

So what do they do when someone has the audacity to flip the bird? They blur it out so we can't see it. And what do we do? We all visualize a middle finger! No one is sitting in their house thinking, “I wonder what the hell is going on behind that specific area of his hand that has been all tiled out so I can't see it… How will I ever solve this conundrum!” Everyone knows what's happening, and we know what the act means, but seeing it is just too egregious. This makes no sense at all. We can show simulated sex on primetime shows, but a middle finger is over the top. Am I the only one who remembers NYPD Blue? I've never seen so much side boob in my life, and I'm just talking about Dennis Franz.

Here's the only scenario when a middle finger is too much: When it's being inserted into a grown man's ass as he hangs himself from a belt in his hotel closet as he waits to peak in his auto-erotic asphyxiation (we miss you, David Carradine). That scenario. That is too much for general audiences. We can say “bitch,” “ass” and “damn” but that one finger is just too hardcore!

This is when people attempt to tone down what they're saying by replacing it with other words. My mother and sister always used to describe women they didn't like as “witchy.” Obviously this is a synonym for “bitchy.” And not only is it a replacement word but it rhymes with the original word for fuck's sake. Couldn't you take your veiled attempt at not calling a girl “bitchy” and get more than one letter away from the actual word you mean? How goddamn lazy is that?! My point is that the context is the same and that's what we should be focusing on. It's not the word that has the power but what we mean when we say it.

It's like calling a black person “Blackie McCoon-Spook” and then justifying it by saying, “Hey, at least I didn't drop the N-bomb.” Well, yes, that's true, but we all know what you meant, so you may as well have said it. The point is you're being a racist dick. You could call a black guy a “Steve,” but if that's code for the N-word in your circle of friends, then what's the difference? When my mom would say “witchy” I immediately thought “bitchy” because that's what she meant. And when they blur out middle fingers I immediately want to flip someone off for real. And when they show Kim Kardashian on TV I immediately want to listen to a Ray J CD. And during the holiday season be sure to enjoy some Prison Blend… the coffee that is.

Related
Take Your Eyes Off Twitter and Do Your Fucking Lifeguarding Job!
David Brinn Silly
It’s Me, Winter, and I Can Hear All You Assholes Talking About How Much You Fucking Love Fall
Sarah Gardner
How Would You Rate Yourself as a Person From One to Chick-fil-A Employee?
Blake Dee
Resources