There are some things for which text messaging is great. For instance, it's great for confirming things ("Yes Mom, I'm having safe sex."); as a goodnight after a goodbye ("Had a lot of fun tonight xoxo"); to reconfirm things ("Seriously Mom, I'm having safe sex! Stop calling!"); and of course, for when you just don't feel like speaking at the moment ("I feel like I shouldn't have to ask you this Bryan, but I'm really hungover. Could you stop blasting your Shania Twain music?").

Guys, if you get a "nothing" reply to your grammatically correct and perfectly spelled, "Hey I'd love to see you. What are you up to?" Run. Back before the iPhone and BBM, people had to call a land line, and possibly brave talking to a roommate or parent just to get a hold of you. ("I'm sorry Andrew, Debbie isn't home. She's at the doctor getting that wart removed.") I'll admit it, texting is the greatest invention since dinosaur chicken nuggets, but what are we missing when flirting consists of having an all-day texting conversation? There's no body language, no difference in someone's tone of voice. "Because" somehow has become "cuz" and when someone says "lol" are they really laughing out loud or just trying to make you feel better about your horrible joke? Or does that mean "lots of love" now? Even I can't keep it straight anymore.

However, out of the goodness of my heart, I've compiled some valuable information that everyone should know before giving out their BBM pin.

If you ever receive the dreaded, "Whatever" via text, WARNING! DANGER! BEEP BEEP BEEP, sound an alarm! At no time will this by any means indicate that someone genuinely doesn't care. Realistically, there is no other way to interpret a text like that because have you ever heard someone say "Whatever" in a happy, sour-less tone? I've heard a fair few, but for a girl, by saying this we're literally writing it on your forehead with a sharpie that we're pissed. Very pissed. We want you to ask what's wrong, and be concerned, but no, most of the male specimens at this college think that we actually mean what we say…which is completely ridiculous. 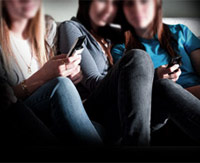 There's only threeways about it. "Heyu wuts up. Wanna hanmg out?" at 1 a.m. Ladies, I really hope that none of you are idiotic enough to believe that the super hot boy from your English class actually just woke up. No! He is drunk and probably hornier than a 13-year-old boy on Viagra. He's with the boys, fist pumping like a champion and realizes he doesn't want to end up alone tonight. So what does he do? He texts you, of course, to see if you'll come "keep him company."  Stay in your bed, ladies! He'll either be passed out by the time you get there and you'll be locked out in the cold, or he'll be so drunk that vomit is coming out of his nostrils. Not to mention, how do you know that wasn't a mass text and he's trying to see who will respond first.

Guys, if you get a "nothing" reply to your grammatically correct and perfectly spelled, "Hey I'd love to see you. What are you up to?" Run. I'm not kidding, run! When a girl likes you, she is going to put on her top notch flirting hat via text and probably not respond for a few minutes because she had to stop her friends mid-pillow fight to construct the perfect response.

Obviously, it's a whole lot easier to flirt with someone or put yourself out there when you don't have to look that person in the eye, or heck, even hear the sound of their voice. But all this texting has resulted in a very wide gap of miscommunication. So stick to short conversations people! If your boyfriend or girlfriend has cheated on you and you want to slowly burn their flesh off with your hateful words, texting is not the way! No matter how many exclamation marks and little sad faces you make, they will have no way of telling how mad you actually are. Start having conversations again instead of hiding behind a text!

And if you feel that I've missed any important texting do's and don'ts, I'll be sitting by my BlackBerry… feel free to text me.

Related
Is Age Really Just a Number?
John Guaspari
If I Spend 3-4 Hours Writing and Editing This Article, Do You Think She Will Have Texted Me Back By Then?
Matt Kennedy
No Surprise, You Just Screwed Up Your Starbucks Order Again
Clayton Moore
Resources