"The most important document to emerge from a computer since The Golden Rules of Instant Messenger."
-Mark Zuckerberg, Founder and CEO of Facebook

I. Acronyms should not require a degree in cryptography.

I can get on board with the usual "LOL," "ROFL," and all that shit. But when these fuckers start making 10-digit acronyms because they're too damn lazy to type it out, I really begin to lose my freakin' mind. Seriously though, I don't want to feel like I'm trapped in The Da Vinci Code trying to decipher your stupid fucking response. OMGITISMLSH.OC!ILTQITO…F Oh my god I think I shit myself laughing so hard. OH CRAP! I left the quiche in the oven….fuck.

Quit posting this "…" shit at the end of your status or response. What am I supposed to do with this, guess if you really meant it? Like the profound fucking statement you just made about being back at work is to be continued? Are you second guessing yourself? "I ate at Chick-fil-A and it was awesome…. (uh, I think)." Here's another one: "lol…" What the fuck is this? Is your laughing some unsolved mystery? Should I get Scooby Doo and the stoner to investigate?

I don't have a problem with people "liking" a status, or with commenting on a status, or both. But don't "like" a status and then comment with "yea." No shit. The "yea" is implied by your act of "liking," you jackass. And let's try to keep comments on topic; nothing pisses me off more than some jackass commenting, and then adding some trivial shit to the topic. Now I get 15 emails between a bunch of idiots discussing which Nickelback video sucks the most when my original post was about how prunes and Coors Light give me gas.

One time I was in a meeting and I had to sneeze. Instead of making a loud scene I figured I'd hold it in, which didn't work out so well as I found out air must go somewhere, in this case a fart. Needless to say, it was kinda uncomfortable; you know, the kind where you're sitting with all your weight on one cheek thinking, "Damn… I should really go check." Yeah, so that's how I feel when I see all this political propaganda posted everywhere. Even if we agree on everything we don't need it broadcasted, it simply leaves ya with a weird feeling. This isn't the forum for this debate; for everything you like, someone else hates it. So why create the animosity amongst online friends, all 1318 of them (and yeah, I'm sure you keep in touch with them all)?

V. You have religious beliefs, great. See you in hell.

We're in the year 2010 so it's pretty much becoming socially acceptable to say "like" in between every brain-fart you call a thought. "Like, I was so, oh my God, like, blown away by So You Think You Can Dance." How-fucking-ever, if you type out "like" in your status/post then you're a damned idiot. How do you feel knowing YOU fuel Al-Qaeda? Honestly, Facebook needs to start putting asterisks next to certain names. At the bottom of Facebook it shall read: "Asterisked names indicate friends who have been certified fucking morons. Thank you, Facebook Staff."

VII. Stop inviting me to your gay-ass fan pages.

I think fan pages are great. You don't want to waste everyone's "News Feed" with shit your group is doing, so make a fan page. But don't invite every person you know to join your damn group if it doesn't pertain to them. Look, I live in Atlanta; I really don't give a flaming shit about your neighborhood badminton team in Hauppauge, New York. Also, why the fuck are you playing badminton? Ping pong too fast paced for ya? Just use some discretion people, and go play with your shuttlecock. 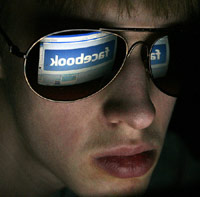 If you and I are talking about someone and I say, "Yeah, he sure is one stupid dipshit of a person," and then that person joins Facebook, don't suggest that I be his friend. It really makes me look like an asshole when this turd posts on my wall, "Hey man, how've ya been?" and I reply, "Go fuck yourself." All because you thought I'd just love to catch up with him. By the way, dickhead, you know that time I told you I don't have a problem with you, that I was just having a bad day? I was only kidding; I can't fucking stand you, and chances are I think you're queer.

IX. Your kids are BORING.

To all the moms and dads of Facebook, I wish your child the best. Seriously, you're blessed to have a family and I hope your children live life to the fullest. I hope you share great times, great laughs, and make many fond memories. BUT, I don't want to fucking hear everything your kid did today. What the fuck am I supposed to do with the knowledge that little Woogie-Bear got a boo boo while making a poo poo? Should I send a fucking get well card? Let me explain why social networking sites aren't for family updates. A few years ago this dude named Alex had a deaf wife and mom. So one day he invented the phone. Why? How the fuck should I know, maybe to call his dad. I don't remember where I was going with that… but I guess what I'm trying to get at is: If I want to know how your kid is doing, I'll call your ass and ask.

What the fuck! These are two sites for a reason! I've said this time and time again, you're not that damn important that we need an hourly update about what the fuck you're doing. But for the douchebags who are curious, that's why Twitter was created. Most likely by some asshole in his early 30's who publicly wears denim shorts and still lives in his mother's basement. But then, some asshole in his late 40's who branched out and got an apartment plastered with Hayden Panettiere posters decided it would be a novel idea to merge a Twitter account with a Facebook account. What a jackass. If Facebook is reading this, please limit status updates to two per day. This Twitter to Facebook shit has become the door-to-door salesman of social networking. Leave me the fuck alone, and NO, I don't give a shit that you just turned left into Best Buy. Go iFuckyourself.