You'll gain and lose weight your entire life, just be yourself this year.

My guess is you're like just about everybody in the world: in 2015, you want to lose weight. Well let me tell you about losing weight: It's overrated, ostentatious, narcissistic, and annoying. I might even go so far as to say it's cockamamie.

I lost 40 pounds in 2014. After that I gained back seven or eight. At this pivotal junction my life dangles. Which way will I go? Should I stay or should I go? That's a line from a 1980's Talking Heads song. It was a different context and different decade. But as a new year commences, everything relates to gaining and losing weight.

People in your office will caution you to stop eating so many chocolate milk shakes. Ignore them. Be who you are meant to be. For losing 40 pounds I gained respect. For gaining a few back my critics are chirping again. They are appropriately skeptical. We should all be wary of unpredictable people.

2014 was, for me, a year laced and riddled with the same daily mental torture. I would walk into my kitchen and think about all the things I wanted to eat and had been eating unabashedly for decades—in unfathomable quantities. Then an agitating voice would interrupt my day and say: Don't eat that. And don't eat that. And don't you have the discipline to avoid eating that chocolate ice cream? You're a chump. Show you have moxie. In 2014 like never before, demons infiltrated my thoughts.

You enjoy. You employ. You get coy. You wonder about dudes named Roy. You avoid eating soy.

Along this journey you eat a bland turkey sandwich on whole wheat bread. But it's missing the best part: high fat mayonnaise. Fed up, you cheat. For the next meal you maul a meatball sandwich. Each the size of apples, the meatballs and tomato sauce ooze out of the bun. Because biting into half of a meatball is clumsy and not as exciting, you try to eat each meatball whole. But eating a whole meatball seems unseemly and grotesque. If you are by yourself, it's cool. 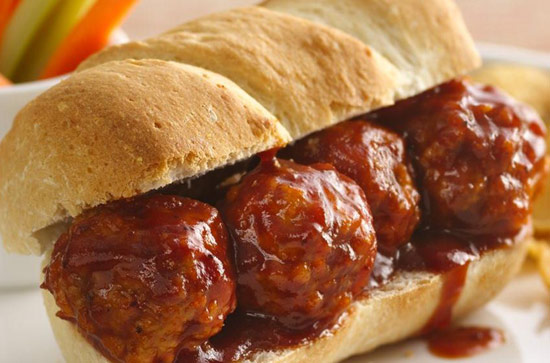 But eating these sloppy cylinders with someone else requires good manners. Good manners are unenjoyable. The whole meatball sandwich experience becomes a tedious and frustrating endeavor. It's like wearing a tie with the top button jabbing into your neck.

Don't misunderstand. Alone, eating meatball slop is a fun fest. You can get the tomato sauce on your hands and fingers. If you don't have a napkin, you can wipe them clean on your socks, pant legs, or shirt. No one is there to tell you that's wrong. You revel in the slop.

For the past several months, while striving to become the most fit and admired male on New Jersey, I avoided my favorite road, Route 10. On this highway, which traverses the tasty New Jersey towns of Hanover and Parsippany, stand the giant pillars of the Fabulous Foods Kingdom. In no particular order they are McDonald's, Wendy's, Burger King, and Taco Bell.

Over the past decade, those Four Horsemen (football reference for your daily Google assignment) sent me into the Biggest Gainer Club. They brought joy, serenity, mental anguish, family upheaval, and stomach aches that sometimes cut at my insides like a machete blade. Route 10 is to blame for my life expanding into bodacious bigness. The road was bold, bad and beautiful. Like life, Route 10 had it all.

If there was one thing I could not get enough of, it was the 20-piece Chicken McNuggets complemented by five cups of barbecue sauce. The cups were for non-stop nugget dipping. So socially unacceptable are McNuggets to mainstream New Jersey and America that I would pull off to a random neighborhood "No Outlet" side street to eat. There, no one with sway over my life could catch me. A few cars rolled by. But the drivers didn't recognize me or pretended not to.

My tip to you for 2015: Never eat McNuggets while sitting in a car in your own neighborhood. You will be vilified and evicted. Neighbors will blame you for destroying the value of your hood's houses.

The second biggest wonder of my world during those tremendously tumultuous times was the Taco Bell Potato Cheesy Burrito. When you go there, get three. Two are not enough. Eating these is better than your first, second, and third rollercoaster rides.

Like the McNuggets, I had to eat these incognito. Near the Tantalizing TBell, I would bury my car in between vacant cars in a remote lot. It had a truck stop vibe. Whatever. You can't allow people to see you eating three Cheesy Potato Burritos. Otherwise, they will never speak with you again. They will avoid you at the grocery store. They will tell their neighbors about you with bad overtones. Those neighbors will be disgusted and with good reason. Of you they will think less. You will be immediately labeled the town pariah, assuming, of course, you have not already won that distinction.

All this is a distorted and delusional way of saying that you should go to Route 10 in 2015 and, in succession, order everything you have every wanted to eat at McDonald's, Burger King, Wendy's, and Taco Bell. At Wendy's, order ten large Chocolate Frostys. Use a spoon to eat this ice-cream-thick milk shake. Finish two. Put the other eight in your work office refrigerator. Have two of those the next day at work, three the next, and three the next. Do the math. That's ten I think. People in your office will caution you to stop eating so many chocolate milk shakes. Ignore them. Be who you are meant to be. Follow your muse. Work colleagues can't control your life.

Then, with a sudden burst of energy, reverse your life trajectory. Swear you will never allow yourself to ride on Route 10 again. Commit to losing weight.

Start your journey back to health. Commit to losing 40 pounds by April Fools' Day. Compel innocent bystanders to gawk at your svelte self. Be the foxiest man or woman you know.

Building on that momentum, whip into the Dunkin' Donuts parking lot. Order a large cup of coffee with extra cream, extra sugar and extra pumpkin sauce. Add to your order eight glazed donuts.

In the restaurant's parking lot consume the bombshell beverage and sweet breaded wonders.

This Aesthetic Subway Ad Is Here to Tell You That You Are Going Bald as Shit
Chris Logan
Weddings Vows from Me, a Spelling Bee Champion, to You, My Former Spelling Bee Opponent
Devin Wallace
I’m the Best Detective in the World, So Why Do You Keep Second-Guessing Me?
Adam Dietz
A Dating Profile of a Gothic Novel’s Love Interest
Erika Lindquist