I know that blind accusations aren't popular, but hear me out.

Something awful happened to me today. It was one of the most heart-jolting, soul-wrenching, brain-numbing things I have ever lived through as a human being, and I am still reeling. It called into question everything I thought I knew about the human experience and probed the very fiber of my morality. It was mind-altering, time-halting, existential. If it ever happens again, I will not know any better how to respond, and if it never happened in the first place, my life at this moment would be a beaming rainbow of happiness and sentimentality about my very existence rather than a dark pit of despair.

I tripped over a blind person's walking stick.

If attempting to hop scotch a blind person's walking stick is embarrassing, doing it in the middle of traffic while trying to remain undetected is humiliating. Let me start off with a disclaimer: I am very sympathetic toward the blind; I couldn't imagine the world unbound of vision. The list of everyday tasks we take for granted that a blind person cannot is endless. How does a blind person match his socks? How does he pick a profile picture? How does he know when he is done wiping?

Yes, I respect the blind and I do feel for them. However, I cannot stray from a thought process that seeks to assign blame for what happened to me today as it was nothing short of cataclysmic. Furthermore, despite a great deal of concerted effort and self-aimed propaganda regarding the guiltless nature of the physically handicapped, I have come to the daunting conclusion that I cannot be put at fault in my particular scenario, and must instead accuse the blind.

Before I am e-crucified, let's examine the circumstances under which my tragedy occurred. Picture a crosswalk in a busy intersection. Now, your standard crosswalk typically allows for two individuals travelling in opposite directions to pass each other without risk of collision. However, we must remind ourselves that, while sufficiently wide, crosswalks are still a confined space. If one's goal is to avoid getting pancaked by an automobile, he must remain within the painted white lines. So what happens when these lines become a one way street? What if a situation arose in which staying within the confines of the crosswalk became an inevitable crash course? Allow me to present one such situation: one of the individuals crossing the street happens to be blind. Now, a complicating factor comes into play, and it is that of the walking stick. 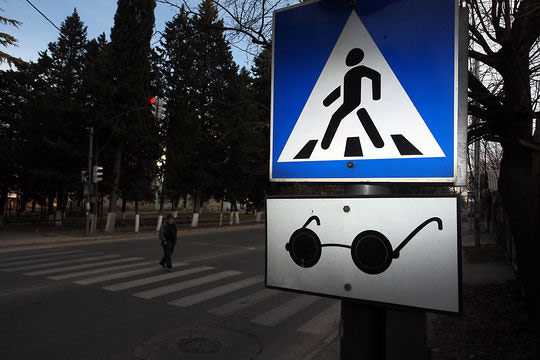 Consider a blind person's Walking Stick Radius, or WSR. The WSR is a measure of the distance between the blind person and the periphery of his walking stick sweep at any given time. A typical WSR will extend to the edge of most crosswalks, as safely proceeding across a busy street requires large sweeps. This leaves no room for the seeing individual, and therefore it becomes a theoretical impossibility for two pedestrians in a crosswalk, one employing a walking stick, to pass each other without a collision.

Of course, in real-time, a blind person cannot sweep left and right simultaneously, so at any given point there is room for a pass on the side opposite the sweep. Obviously, it is the goal of every seeing individual to take advantage of this. In fact, it is our moral responsibility to analyze the WSR of the vision-challenged as well as to detect a metronome-like rhythm to his walking stick sweeps so that a safe pass can be made. If this rhythm is indeed constant, a seeing individual should be able to wisp by while the walking stick sweeps the opposite side. Super Mario and Frogger jokes left in reserve, I and many others have completed this task countless times in similar movement-restricted locations such as hallways or crowded sidewalks. However, what happens when these conventions disintegrate?

My pass was timed. I had analyzed this man's WSR and had assigned the proper rhythm to his sweeps. As he began a sweep to his left, I moved to mine in order to make safe passage. That's when everything went awry. They say that people who lack one sense are capable of enhanced perception from their other senses. Well, this man smelled, tasted, touched, or heard something undetectable to me that caused him to deviate from his rhythm. Like a metronome in defiance, his walking stick halted short of the sweep I was expecting and came back at me full force. I was mid-stride, stupidly smiling at a blind person, and in serious trouble. Oncoming traffic on my left stopped me from escaping the confines of the crosswalk. It was too late to move to the right or to stop as I was already well within this man's WSR. With solid asphalt below me, I realized my only escape route: up.

Yes, I tried to jump.

If attempting to hop scotch a blind person's walking stick is embarrassing, doing it in the middle of traffic while trying to remain undetected is humiliating, and an adjective does not exist to describe what happened next. I mistimed my jump so badly that I not only tripped and went tumbling down in the middle of the street in spectacular fashion, but I actually scissored the walking stick right out from the grasp of the blind man and into oncoming traffic.

In the seconds immediately following the accident, before either of us could truly comprehend what had happened, I fell into a brilliant state of pure consciousness. I saw everything clearly, which I now find to be perfect irony, and felt completely at peace with the universe. I now believe this was akin to what a person feels right before they die: absolute tranquility, contentment. If death struck me then, karmic justice would have been perfectly achieved. When it didn't, my moment of spiritual bliss came to a grinding halt, and my next thought was this is fine, it's just a dream. Get up, do a dance, punch yourself in the face – you'll wake up soon. Unfortunately, I was destined to eventually run out of ways to compensate for what had just happened.

When I finally snapped back to reality, I realized that the list of tasks that stood before me was monumental. I needed to:

It is all a bit fuzzy to me now as I believe I have suffered selective memory loss, but I somehow completed all these tasks with minimal confusion; they say humans can do extraordinary things in the face of extraordinary circumstances. Finally, after some of the most forced, awkward banter designed to soften the blow known to mankind, we turned to go our separate ways, and I completed the misery by extending an apologetic hand which was, of course, left unshaken by a man who didn't even know what a hand looked like.

My only compensation: at least he didn't see me trip.

I do not have the audacity to accuse this man of tripping me on purpose, even though a blind person with a particularly wry sense of humor knows that he can commit such a crime a million times and never be blamed. Rather, let me simply suggest that, as the sighted have a responsibility to analyze WSR and the metronome-like rhythm and to avoid collisions at all costs, the blind have a similar responsibility to adhere to safe walking stick practices in movement-restricted areas. In the absence of an escape route, the burden falls on both parties to do their respective parts in avoiding dangerous and possibly morale-obliterating experiences. This, I think, is easy for all to see.