Ordinary People, Dances with Wolves, Forrest Gump—we've all sat with disappointment on Oscar night as the wrong picture ends up with the Best Picture piece of gold. It's not something that would easily be fixed by shaking up those who cast the votes for the Academy. The industry needs an overhaul that would man-up the dysfunctional Hollywood culture and treat us more consistently to the entertainment value our $12.50 ticket is supposed to buy.

In such a climate, the Oscar hardware would rightfully land in the hands of the deserved recipient, and the past would have treated us to finales with just the right amount of bite to make us feel whole in the following ten films that came up short. Here they are with their Oscar-winning new endings…

With the Orca sinking and "Jaws" in hot pursuit, Quint throws chief Brody overboard as he whines into the radio for the Coast Guard. The effeminate shrill short circuits the shark's radar and he crashes through the bow—eyes rolled over white. Quint then beats the great white over the head with an empty bottle of gin until Hooper can stick ‘em in the eye with that needle. After the man-eater comes to, he switches to a strict diet of seals and turtles.

In the Oscar-winning version, when ET "phones home" he mistakenly summons the Klingon Empire to Earth. Infuriated by the long distance charges, they lock photon torpedoes and blow ET from the sky. Fortunately, the Klingons turn tail and run when they chose Newark, NJ as their base of operations to conquer the Earth.

At the shareholder's meeting, instead of taking the fight to the roof, Dr. Kimball force feeds a month's supply of the pharmaceutical—plastic pill bottle and all—down his colleague's throat. When the evil doctor passes the container intact before his execution, the bottle manufacturer's stock goes up three points, which results in a seat on the board for Dr. Kimball.

No-brainer: Nicholas Cage smartens up and goes out with a much younger girl with fewer tattoos on her ass and a lot less baggage.

Same ending but the Academy needed to see what was in that cornfield to give up the Oscar. James Earl Jones finds that the players have bought out the owners, who now run the concession stands. Ticket prices allow everyone to make a reasonably nice living and results in stadiums composed entirely of bleacher seats and bleacher creatures. At the ballpark, they only sell all-beef hot dogs, there's competitive balance (but not parity), and when necessary, everyone "plays hurt."

"It's wonderful, Molly. The love you feel, you take with you." Well apparently, according to God, played by Milton Berle, Sam's going to be taking a lot more love with him than Molly thought, this due to years of late night "insider exchanges" and the repeal of the Sixth Commandment. Aghast, Molly abandon's her belief in God and goes to Hell after her death. 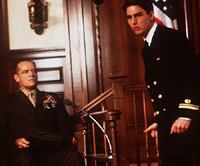 We all remember that "you can't handle the truth." The Oscar-winning change: Tom Cruise bites his lip, turns to Demi Moore in confusion, and then drops to his knees sobbing like Sally Struthers. "Hoping he might restore a man's dignity by shaming a coward," Colonel Jessup leaves the stand, slaps the counselor once, and gives him a one-way ticket to Australia. Nonetheless, Jessup immediately resigns his commission, stops shaving, and prepares to infiltrate a radical terrorist organization in Afghanistan.

Red and Andy still hug at the end, but as Morgan Freeman approaches the boat, he finds four "interns" from the Presidential Palace sanding down the flagpole. They direct him below deck where Andy is sipping tequila and soundly drubbing Raquel Welch in strip chess.

Rather than burying "the Ark" like the Hebrews, the U.S. government allows "Indy" to break it open and establish "a direct line to God." He then moves to England and becomes the Prime Minister. At Munich, while his secretary of state, Neville Chamberlain, is negotiating for "peace in our time," Dr. Jones leads an invasion of France to piss off Hitler. Not bogged down by fleeing Frenchmen, England easily routes Germany's unprepared army in the Ardennes and Hitler goes on to patent "painting by numbers" in the Tower of London after the war. The French, always courteous to any invading force, are eternally grateful for being conquered by an American and open the first EuroDisney in 1952.

"Oscar" likes how Jerry is moved by his client's scene with his family at the end, but would have been much happier if Jerry Maguire accepted that he is simply not a clone of Cuba Gooding, family man. So instead, he mails Renee Zellweger her COBRA application, then goes out with a much younger girl with a tattoo on her ass and a lot less baggage.

Welcome to my EDtalk. My name is Ed, and I’ll be speaking to you about what I consider valid and invalid nicknames for Edward.