Sorry, My Car's a Total Mess

Why are the unapologetic drivers always the dirtiest?

The person who warns you that their car is a "total mess" before you get in it, rarely has a messy car. Generally, you get in the passenger side seat and the sweet smell of lavender fills your nostrils, there's not a crumb or a wrapper to be found, and every inch of formed plastic is soaked in Armor All.

But wait, there's a newspaper folded neatly on the back seat. What a filthy creature.

On the contrary, the person who says nothing about the condition of their car before you climb in: 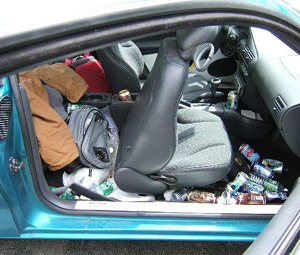 "Yeah, just throw that dead turkey carcass on the pile of shit in the back seat. Oh, try not to step on my birth certificate and lava lamp on the floor there. You can just kick those empty beer cans, moldy egg rolls, and spent toner cartridges under the seat.

Oh no, the seat belt doesn't work, but if you get hurt in a car crash, I'll have no trouble compensating you for medical expenses because between the nickels and dimes lodged in the seats and the change that's spot welded to the bottom of these cup holders, adhered with Coke syrup. This car has the GDP of a small African country.

Why don't I pick it up—all the change—you ask?

Oh, I don't dare collect it all and enter it back into circulation for fear I'll weaken the American dollar against the Euro. I can't just dump that much money into the economy, I'd send the currency markets into a tailspin. The Federal Reserve would have to start burning pallets of $100 bills if I put this thing on Craigslist.

The smell? I'm not sure what it is. But you're right, it does smell like used turnpike urinal cakes smoldering in a tire fire. The smell began about six weeks ago but I haven't the courage to explore its origins. At this point, what deters me most is not lethargy but rather the sheer terror that swells inside me when considering the possibilities of what might reside in the depths of this Mini Cooper. Truth be told, that smell puts the fear of God in me. That smell is not of our world.

Why don't I get it cleaned professionally?

That's a good question, Bill. There is a two part answer to your question:

And by the way, all great, hard hitting, questions you're asking, but now I have a question for you, Edward R Murrow. Do you always shit on people who offer you rides? You know what, fuck it, get out. Good night and good luck, Ed. Get the fuck out of my car. You have about seven bucks in change stuck to your ass, hail a cab."

Great, now I have to call the guy with the car that's a "total mess." I hate lavender.