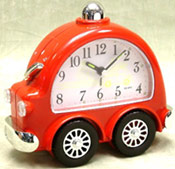 Back in the dizzy, I wrote a little tizzy about the fire alarm in my building. THE SCARIEST FIRE ALARM EVER. At the time, I thought I had woken up in the past, because in between sirens, the alarm spoke words of warning aloud in an ominous robotic tone, similar to HAL from 2001: A Space Odyssey. (I seriously hope I'm the first person to reference 2001: A Space Odyssey as a reminder of the PAST.)

By the by the by (the internet), I've come to find out that not only was my video the SCARIEST FIRE ALARM EVER, it's also been hailed by fire alarm geeks everywhere:
http://community.schuminweb.com/cgi-bin/forum/YaBB.pl?board=firealarms;action=display;num=1126406841

“You know you're a dork when… message board posters with fire alarms for their avatars debate the type of speaker in the fire alarm system you blogged about.”

If your bad at clicking hyperlinks, I'll spare you the trouble: it's probably an EST Integrity Series horn. Additionally, according to Co-Facilitator “weatherdan992002,” The ones I've heard were probably just as loud, but I haven't heard them in years (like since 2000). Also, the ones I've heard never used slow whoop as the tone – they used chime, which kind of makes it seem less loud than this, but odds are, it is the same volume.

Thanks weatherdan992002, you've given plausibility to the fact that I may, in fact, have woken up in the past. By the way, is this the same slow whoop my Motorola phone uses when I have a voicemail? Because I've always thought it should sound more like a retarded chime… And may I also say, your msg board handle is SO 7/4 years ago.

Why is it that every fire alarm that's ever forced people out of a building I've lived in has not resulted in lots of women running outside in the nude/nipple-see-throughy shirts? Of all the hot, lesbianish slumber parties you girls have, you're telling me not ONCE has a fire alarm caught you in the middle of an “experiment”?

Which leads me to my next question (for girls AND guys): If you were sleeping naked, how close would a real fire have to be to stop you from putting on clothes before you ran for your life? (Guys, feel free to ignore this question.)

You know what I'd like to invent? The fire alarm clock. The greatest thing about this invention is that it will not involve sound. If you're like me, the last thing you want to be woken up to is an annoying sound (I turn my phone on silent every night before sleeping). Instead, the top of the fire alarm clock will ignite a small fire in a grill-like area.

At first, this will effect a mild, soothing change in your sleep pattern (especially during the winter… BRRR!!). After 5 minutes, the fire will grow a little more intense, causing a more dramatic change in your sleep (usually kicking off all the covers). Then, after 10 minutes, the fire will start getting serious; small flames may even leap playfully over your head. This will certainly arouse you from whatever warm slumber you may have been enjoying. Careful not to hit the snooze button… that shit'll burn ya!

In the event of a heavy sleeper (too much booze last night perhaps?), the fire will become so intense that it will probably set off the building fire alarm, or, worse yet, set fire to your room. In that case, if you're a girl, I certainly hope it's close enough to keep you from putting any clothes on.

Or at least tell me you wear nipple-see-throughy shirts to bed.