The ambivalent musings of a man child approaching legal adulthood.

Let's get something straight: getting old is awful. Just ask the countless women using buckets full of skin care products or men harvesting the souls of children so that they can live forever (*cough*cough*Webster*JustinBieber*cough*). That being said, I've been 17 for a good four months now and the excitement of turning 18 is causing many things to happen: the flow of time is speeding up, a higher amount of fucks aren't being given, I can consciously feel my cells divide, and I actually have a decent grasp on my plans for the future.

There's a chance that when you finally reach a landmark age, like 40, 30, or in my case 18, what you actually feel is fear and intimidation. I don't tend to get excited over things, or at least excitement doesn't show up when something really meaningful happens. Like when Barack Obama was giving his inauguration speech, I got bored and started watching porn. Even though Barack would have given me a high five for doing this, the example of my apathy in this situation still stands. So what is it about turning 18 that's so much better than the first African-American president? I don't know, but maybe it has something to do with the government FINALLY recognizing me as an adult. 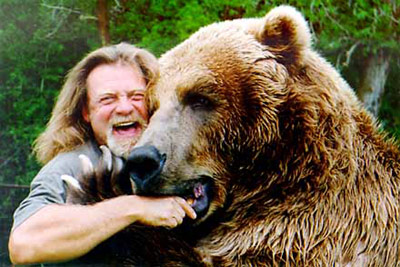 ‘Cause everyone knows you can legally fight bears when you're an adult in America.

I like to think that my childhood was over the second I (very recently) realized that the Will Smith Song "Parents Just Don't Understand" was all about statutory rape, so it's a matter of time before I'm officially a grown-up right? Being mentally older than I am physically, and not feeling, thinking, or acting like your run of the mill teenager doesn't really work for me. I'd love to be able to just take part in the everyday activities and have the mindset somebody my age is known for. If I could do this then the joyous, life-enriching experiences I would have gone through as an American kid would've made me a happier man. Just think of all the unplanned pregnancies and fiery bags of dog shit left on suburban doorsteps I've missed out on. Countless mistakes that define my generation have not affected me in the slightest, all because I'm too mature for my age. Fuck. 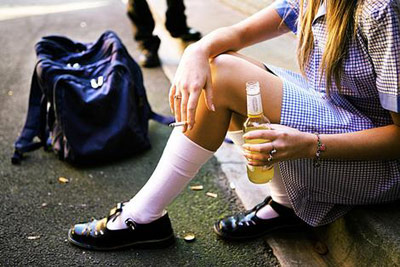 Screw staying above the influence, I want to have the swag of getting white girl wasted.

There's a chance that when you finally reach a landmark age, like 40, 30, or in my case 18, that instead of feeling excitement, what you actually feel is fear and intimidation. I've been very aware of the fact that once a person manages to stay alive for 18 years after they're born, they are officially an adult, and they receive a government issued gold star. The gift of that gold star is amazing. Not getting it would surely drive me insane, restart the Cold War, or cause some other horrifying series of events to occur. Maybe that's why I'm so nervous about becoming an adult. That, or, there's the slight chance that the incredible amount of change and responsibility that comes with turning 18 could be too much to handle. Not only is this terrifying, but it's also a lot to think about, and thinking sucks.

Then again, is being 18 really that great? You get to vote, but making a choice that could change our country's future forever is a little bit less than boring as hell when waiting in a long ass line. People will have to take you seriously since you're finally allowed to make decisions, but most of my decisions are stupid and involve debating which cartoon t-shirt will get me more bitches that day. I'll be able to have sex with people over the age of 20 and nothing bad will happen, unless you count regretting everything while making breakfast after a one night stand as "bad." Then again, I'm currently not actively seeking out sex. As with marijuana, mushrooms, and buying skinny jeans, instead of trying to have tons of sex like the other guys, I'm just waiting for it to miraculously fall into my lap and for my cherry to magically disappear. So getting the government's OK to go stupid with my dick doesn't really change anything. Now it's just like, if turning 18 can't even change my borderline stork views on sex, does it really matter? I like to think that the answer to this question is yes and no.

18 is a big deal to me because it signifies that I'm going to be starting an entirely new chapter in my life. Since my birthday's in August, I'll be starting college shortly afterward, leaving for a new city and leaving all my friends behind. Even though I like change, this change in my life is pretty important, and it's intimidating enough to take time off from coming up with dick jokes or other productive things to write an entire article about it.

Look on the bright side: Sure, I could be kidnapped or become a drug addict unable to leave Detroit for the rest of my life, but I managed to avoid being on one of Maury's "out of control teens" specials and am yet to wake up with a baby in my belly. If I can hold my own in life up to this point, then the future shouldn't be so bad. Yes, getting old and reaching a certain age can be intimidating, frightening, heart stoppingly suspenseful, boring etc. but what I keep forgetting is that whatever happens in the future could also be pretty amazing. If you're stressing over turning 18 or over the future in general, don't, because even though you're probably right that everything's going to get super shitty, super quickly, there's still a slight chance that you're oh so wrong. 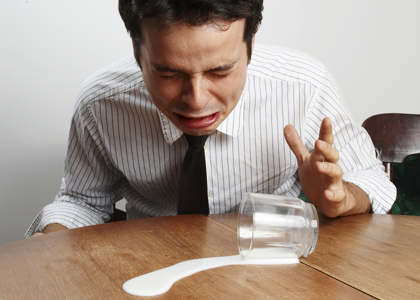