A Modern Report on Old People

The closer you are to death, the more intriguing you are to everyone else.

…But in all seriousness, my grandfather passed away recently, and it's been very hard on me. He taught me so much, like "righty tighty and lefty loosey." So when I'm operating a faucet like a BOSS, that's all Larry Par.

I've noticed a lot of old people think music is worse now. I think what actually happened is old people's lives are worse now.The most important lesson he taught me was to never worry about what others think of me. I remember one time, I was with my grandfather at a dinner party type thing. There was this guy who had cornered my grandfather and was just talking and talking and talking away. My grandfather was getting visibly annoyed. In a situation like this, I know I'd probably just sit there and listen to the annoying guy so I wouldn't have to make a scene or be at all confrontational; not my grandfather though. After a few minutes of the guy's incessant blabbering, my grandfather took a deep breath, looked the man square in the eyes, and died. I was like, "Grandpa, that's not appropriate, this is a dinner party!!" …Sometimes I cry in class. 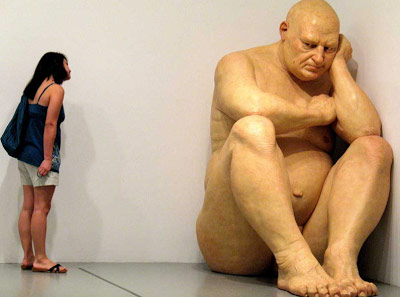 So yeah, this whole experience has me thinking about old people.

There's this woman in my family named Mabel, and she is so unbelievably old. Allow me to set the scene: about 10 years ago, my uncle remarried some Italian or maybe Jewish lady, and Mabel is her old and out of it mother. Mabel was physically there when my grandfather died, but I'm pretty sure she still has no idea.

The worst is getting trapped in a conversation with her. One time, some family and I were at my uncle's house, watching a football game, and Mabel was just sitting there, looking right at my face, which was odd considering there wasn't a football game happening on my face. She was looking right at me, but I don't think she was really seeing me. I suppose she was imagining when she was my age, before the world had color, or whatever.

Anyway, after like 20 minutes of staring and mouth breathing, she said, "So Nick, how's school going?" Which is just crap, by the way, because I know she doesn't have a follow-up question, or anywhere to take that conversation. So I answered, "Good. How are things going in your life?" and everyone chuckled because we all know there's nothing going on in Mabel's life.

Then she saw my phone in my hand, and I guess decided we could bond over the fact that it exists. So she said, "OOOH, is that your phone? When I was your age, we didn't have phones… all we had were horses. And if your father caught you on your horse at the dinner table he'd take it and disable everything except it's emergency horse functions." …Or something to that effect.

She also told me her other old people opinions like, "Computers are too small, they hurt my back."

Eventually we got into current music a little bit, which she's not a huge fan of. I've noticed a lot of old people think music is worse now. I don't think that's the case though. I think what actually happened is old people's lives are worse now. They're like, "Remember Buddy Holly… and hearing things?" Now it's all Iggy Azalea and mild to severe arthritis.

My favorite old person is my Great Uncle Tim. He has pretty severe Alzheimer's and equally severe ADHD, but that combination works out better than you'd think. His mind jumps from thing…to the exact same thing. He's like, "I really need to finish making breakfast, but first, I need to finish making breakfast." He probably won't be around for much longer though either.

(In loving memory of Larry Par)