The shower is my laboratory. It's where I invent. It's where I write. I mean I obviously don't sit in my bathtub, Indian style with my laptop, outlining screenplays. At least not anymore. I'm tired of the looks I get at the Apple Store from the heavy-set gentleman, with the beard and horn-rimmed glasses, when I plop down my lathered-rinsed-and-repeated Macbook Pro. I don't need judgment calls from a guy with a laminated nametag adhered to his chest with the word "Genius" scrawled in 14pt Myriad. I mean your job requires that you wear a nametag, why don't we curb the ego a little, smarty-pants. 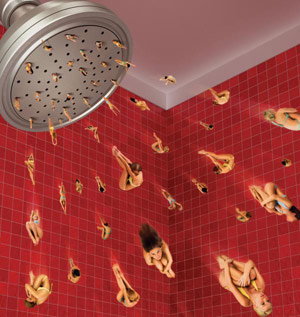 Whatever happened to quality alone time… Anyhow, the writing happens in my head. That was the point I was trying to make before I digressed, exposing my deep-seated resentments towards Apple employees. It's my salvation, the shower. It's a few fleeting moments of alone time to gather my thoughts without the constant bombardment of sensory input we experience in life. No computers. No talking. No TV. No cell phones (again, not anymore. AT&T guys are more condescending than Apple guys. I get it; you're wearing a tie. You're a serious person. But again: nametag). The shower is my sensory deprivation tank where all input is benign and there is nothing to distract the brain synapses from firing, constructing new jokes about Lindsey Lohan and airline food (it's God's work I'm doing). I wash clean and emerge renewed and refreshed, metaphorically as well as literally.

That is until The Axe Effect.

What monster would choose this color? This color does not exist in nature. This fluid is a sign of the apocalypse. I remember when soap used to be a solid. In the not so distant past, soap would come in one form: brick. Not only would it get you clean but it would second as a projectile weapon (see: Boston's Irish Spring Race Riots of 1967). But this seems to be a relic of the time forgotten. Now, in 2011, if I go into someone's shower and see a bar of soap, I think, "Where am I, Guantanamo Bay? When I stepped into this shower, did I get magically transported to some second world, Soviet Bloc country? The economic downturn must have hit this shower hard because I feel like I'm in a YMCA locker room in 1983." 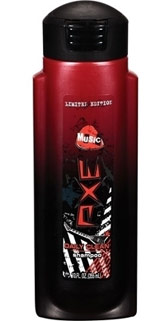 I generally pick up whatever soap is on sale, and by soap I mean body wash. This week on sale was Axe body wash. Arranged on the shelf in the grocery store were half a dozen black bottles with distinctive, lunatic flavors with ambitious names like Axe: Instinct, Axe: Cool Metal, and Axe: Snake Peel. I picked up each bottle, popped the top, held it under my nose, and gently squeezed the bottle, pushing the excess air out of the container to get a sniff. This is important because this is what you are going to smell like for the next month, and if you actually end up smelling like snakes or metal, you're going to get fired from your job.

I ended up going with Axe: Music because it was the last one in the sniffing queue, and they all smelled the same: like my bedroom when I was 15 years old, an eccentric mix of deodorant, Starbursts, and fear.

So there I was in the shower, trying to write. I popped the top and poured the liquid into my hand.

It was bright red. 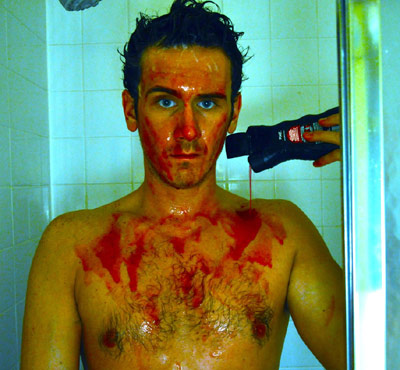 This fluid I was supposed to be using to clean myself made me look like I had just gotten into a fistfight with a family of polar bears. What a mind blow. It couldn't be right. This soap is broken.

And that's when the writing stopped and I was consumed in the viscous crimson ether, completely preoccupied by its meaning. My fixation permeated every evening in the shower. I pooled the liquid fire truck into my palm and thought, "What is this black magic?" I bathed with my mind consumed with thoughts like, "What monster would choose this color? This color does not exist in nature. This fluid is a sign of the apocalypse. I think this is in Revelations."

After some careful consideration and many wasted nights staring stoically into the glowing LCD lights of my laptop at a black Word document, I decided there was only one way to slay the red beast.

And you're reading it right now.

Now, like Psycho in Technicolor, I watch the Axe: Murder as it circles the shower drain and disappears into the black void of The Chicago Sewer System. I get down on my knees and whisper into the drain, "It's how dirty boys get clean, mother fucker."