One of the most comical, yet disturbing subjects of College Life is the “Off-Campus College House.” On nearly every college campus you have buildings that are so beaten down and falling apart that they are essentially Crack houses, yet year after year students continue to move in. Some say that people who live in these houses have to be out of their minds, and maybe they are right. But one thing is for sure. We always throw the best parties. 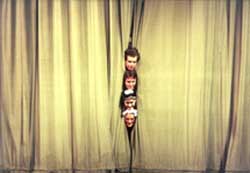 When we moved into 846 in June of 2002, no one really knew what we had gotten into, but we found out very quickly. Three days after moving in, the door frame holding the hinges to our bathroom door completely rotted and when one of us went to open the door it came crashing to the ground. As a temporary solution my roommate took a bed sheet and stapled it to the door frame. For three months we had a bed sheet instead of a bathroom door. That summer when girls used the bathroom at our parties, there was always someone standing in front of the sheet with his arms crossed looking like the bouncer at a dance club, deciding if you were cool enough to cross the yellow curtain. After numerous calls our landlord finally fixed it…sort of…in September.

When people walked into the house they often commented on how the house seemed to be shaking. That's because it was. We lived next to a Soup Kitchen and Rescue Mission with a massive generator that would cause our entire house to vibrate 24 hours a day. It was kind of annoying at first, but after a few months I found it soothing to sleep to the loud humming noise.

The heat in 846 never really worked, which always surprised me since every month we'd receive a $600-800 heating bill. I sometimes wonder where all that heat went that we paid for. It was as if the bums were siphoning it out of our house or something. I can honestly say that during the coldest part of winter it was actually colder IN the house then it was outside. It's always funny when you pay astronomical heating costs, only to have to walk around your house in a winter jacket, hat and gloves. I often wondered why girls never wanted to stay at 846. Oh wait a minute, no I didn't, we lived like Eskimos.

Being someone who enjoys reading about what's going on in the world, I purchased a subscription to the Milwaukee Journal Sentinel (the local daily newspaper) last year. I had a subscription, but I never actually received the paper. That's because within twenty minutes of the paperboy dropping my paper on our porch, the bums would walk by on their way to the Soup Kitchen and steal it.

It got to the point where the paperboy used to call me at 4:30 in the morning and say, “Mr. King, Its 4:30 AM and I'm just calling to say that I am putting your newspaper on the porch right now.” I used to call customer service so often that the operators knew me by name. I'd say to them, “Do you realize that I spend more time talking to you on the phone then I do actually reading this newspaper that I'm paying for?” They didn't give a shit. Whenever I'd get really pissed about not getting my paper, I'd just think about how there was probably a homeless person in one of the adjacent alleys, doing all the crossword puzzles in my paper and then I'd get even more pissed. Those were my fucking crossword puzzles!!!

Midway through the summer, our porch—made out of rotten wood—began to collapse. It got to the point where the only people who would actually walk on it were the bums who came up to steal the newspaper. Once our landlord was certain that the porch no longer met safety standards of any sort, he arranged to have it torn down and built a brand new concrete porch. When the porch was first built we were convinced that it would make our house look cooler and make girls want to come over. All it did was make it easier for bums to steal my newspaper.