It is a sad occurrence when you kill a cell phone. Aside from the expense and hassle to replace it, there is always that "why am I so stupid?" moment that feels strikingly similar to the moments leading up to a childhood spanking. Your service provider wrings its greedy hands in anticipation as you enter the store.

"You can sign another two-year contract," they say with pure delight. This, unfortunately, will only serve to extend what has already been a timid relationship. The on-again, off-again nature of your time together has been surprisingly congruent with the spotty coverage and lackluster customer support. You cringe at the thought…

"I put my mouth up to the charging receiver and blew. Poo water bubbled from every possible orifice.""How much is it to just buy the phone?" you ask. This, inevitably, elicits a "hmm…let me see" from your sales associate, as if no one has ever been foolish enough to entertain such an option. The silence weighs heavily, and you begin to cower, facial features drawn up in anticipation of a knockout punch. "Ah, here it is, sir….that will be $400." FOUR HUNDRED DOLLARS! If only I hadn't been so stupid and (fill in the blank)ed my phone! So there you stand, a defeated blob of remorse. As the credit card swipes, a sting registers internally, and you soberly vow never to (fill in the blank) again, because nobody should have to go through this.

Cut to a Friday afternoon two months ago. I am on iPhone number three. This one, I tell myself, is going to be different. The $40 case confirms my intentions. I was careless with the others and paid dearly, but Chappy is a changed man. Never again would I be at the mercy of AT&T.

Lunch, earlier in the day, had been spent enjoying Dave's World Famous Pizza buffet. The experience was heavenly, but I was admittedly over-served. My GI system, suddenly finding itself overwhelmed, hurriedly began clearing space. A lengthy trip to stall number two was inevitable.

Though never actually diagnosed, many of those who know me claim that I am stricken with Attention Deficit Disorder. I prefer to label my affliction "the fidgets," as this more accurately depicts the root problem. Somebody gave me Adderall to study once, but it only served to make me incredibly euphoric and even more fidgety. I failed the crap out of that test. Whatever the case may be, I have trouble sitting still anywhere, especially a toilet seat. If there is nothing to read on the walls, then a piece of literature will do. In the event that neither of these happen to be present, out comes my iPhone. The downtime serves well for checking email, stocks, or simply playing a nifty little game where one tosses a virtual paper ball into a virtual basket (set in an office no less).

So at three o'clock on that fateful day, I was alone in the bathroom, whistling with delight whilst doing my business. Boredom quickly set in. I pulled out my iPhone to play that nifty little game where one tosses a virtual paper ball into a virtual basket. While sliding the dealy over to unlock, I inexplicably moved the device closer to my body. When it slipped through my fingers, the unthinkable happened… 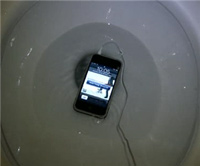 Now that's what I call a serious memory dump.If you tell someone that you dropped a phone in the toilet, they invariably have but one question: "Was it clean, or….you know?" This, sadly, was the latter, and without a second's hesitation, yours truly had cast reluctant hand into the bowl. If I said nothing else was touched, I would be a liar, but I did fish out the phone after a moment or two.

In sheer terror of the recourse (see above), I began a wholehearted attempt to save this soaking wet puppy: first, a quick dabbing with toilet paper, then (and this is what grosses people out) I actually put my mouth up to the charging receiver, and blew as hard as my cheeks would allow. Poo water bubbled from every possible orifice.

Once this exercise was exhausted, I found myself running down my office hallway (yes, I washed my hands) in search of a fan. My co-worker Mike had one, and since he was gone for the day, his office became my ER. I cranked that joker up to full blast and laid my iPhone delicately in its wake. Only time would heal now.

Hours later, I worked up the gumption to try powering up. An initial trial run was bleak. A second was more promising. Slowly but surely, it came back to life. The screen began to clear, calls could be placed on speakerphone, and email was functional. I cheered this progress, and worries of a wasted $400 began to fade. Within a few days, everything was back to normal; well, except the camera—a small price to pay in the grand scheme of things.

There is one notable change: Called no longer by its given name, "iPhone Number Three," my little friend will live out the remainder of days known only as "iPhone Number Two."

Btw, next time you're on the toilet, check out the all-new PIC Mobile. Just go to “www.pointsincase.com” on your phone's browser!