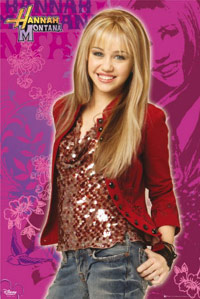 Lindsey Lohan, Britney Spears, and Hannah Montana all have one thing in common: They’re crazy bitches. Well, Hannah Montana isn’t crazy just yet, but if I had to put money on it, I’d say she will be. I’m sure DeGraaf has the line on the over/under if you’d actually like to place a bet.

I’m not really in touch with pop culture anymore, which is why this whole Hannah Montana phenomenon hit me in the face like a sack of bricks, which were placed in another sack, which was also filled with bricks. All of a sudden, everywhere I turned I heard about Hannah Montana. I was like, “WTF, who is Hannah Montana?”

I started to get interested when I read an article about a girl who won a Hannah Montana contest. She wrote a fake essay about her dad dying in Iraq so she could get tickets to a sold out Hannah Montana show. Her dad turned out to be a regular healthy guy. They ended up giving the prize to somebody else, who wrote a legitimate essay. I decided to read more about Hannah Montana and even watched an episode of her television show (for research purposes for this article, of course.) Needless to say, she’s a terrible actress.

For those of you who don’t know who Hannah Montana is, let me give you some information. Her real name is Miley Cyrus, daughter of country singer/one hit wonder Bill Ray Cyrus.

As I was reading more about Hannah Montana I came across an article which had quotes from concert reviewers and fans. I laughed at how jaded the fans were and decided that I’d write this in hopes that they would read it as a fair warning on where her life is heading. Here are some quotes from reviewers and fans. After the quotes, I’ll make funny comments.

“Second, if you don't wear ear plugs, you'll shave at least a year of good hearing off the end of your life”

“Cyrus sang flat during her encore, but her audience didn't care.”

People said the same thing about Britney Spears. She can’t sing, but who cares? Remember how bad her performance was at the Video Music Awards? Hannah Montana is 15 pounds away from everybody caring.

“The 15-year-old performer … is long on charm but undistinguished as a vocalist. She doesn't sing. She wrestles songs to the stage.”

Rent-a-cops wrestle unruly fans to the ground. Maybe when her singing career is over, she’ll have job as a rent-a-cop.

“The noise level? Hive-inducing. Several parents, sacrificing sanity and hearing, were helping themselves to a Mommy beer.”

More like about six or seven Mommy beers. I’m sure they drove home, too.

“I am 14 years old, and, like many other girls, I love Miley Cyrus (aka Hannah Montana). For two months, I have been having a few health problems. (My mom says it's because we couldn't get tickets to Miley's concert. She's joking, of course.) I have her DVDs and CDs. I put one on, and when I'm not feeling well, I forget all about being sick.”

Hannah Montana’s music is what made you sick. I know it made ME sick. Her concert is sort of like a kidney stone: you’ll feel better after it passes.

“I love Hannah Montana because she is one teen star that has values. She adores her family. She's not into drugs or alcohol. And I want to be like her.”

I hope you remember you said that when she shaves her head, endangers her children, and flashes her beaver in public.

“The main reason I like her is because she writes her own songs and music. I like one song in particular, because it told how much she loved her pappy. I listened to it twice. It made me cry. It makes me think of how much I love my pappy.”

She writes her own songs? Somebody has a future as a stand up comedian. BTW, your Pappy doesn’t love you back.

“I sing Hannah Montana songs everywhere, even in the shower! Once my mom came into the bathroom and said, ‘Are you singing?' I was embarrassed, but when she got out, I started singing again.”

“I love Hannah Montana's music because of the message in each song. The song ‘Nobody's Perfect' helped me because I was always making mistakes and saw it as a problem. But the song made me feel better and made me realize that it was OK.”

Making mistakes IS a problem. Remember when Britney married K-Fed? That was a MISTAKE that wasn’t OK. Have you met your Kevin Federline yet?

“She's nice, doesn't wear revealing clothes, she's really pretty, she is a great singer, she doesn't smoke and I love her shoes.”

If you’re wondering why I can be so sure she’ll end up like every other misguided child star, it’s because I’m actually from the future and have seen the January 2020 edition of Playboy that she poses in. That and her dad was the artist who gave us “Achy Breaky Heart.”