How to survive a zombie attack in four unproven, unlikely steps.

I‘m a rational enough person. I managed to graduate college with most of my vital organs still intact, I can hold down a steady job, I've never been beaten by the po-lice, and have been able to scrape by, so far, with few CNN-worthy acts of debauchery under my belt—Spring Break, no relation. But, for some reason I still have this resounding pang in the back of my gut—you know, that area not quite eroded by booze and not under complete paranoia by my love for ze sweet joy that is 420 sparkle brownies. And what is this fear, you ask? The one that surpasses even my unexplainable and completely embarrassing phobia of crabs (both kinds, if you will)? Well, just come a bit closer so I can whisper it to you (you never know when good ‘ol Al “Yehaw” Gore is listening…).

My greatest concern in life, my all-consuming terror is… the impending arrival of zombies.

Logic might suggest you run to the nearest Wally-World, but that is where you are gravely mistaken. Zombies love good ‘ol country alligator-eating folk.I won't lie. I know this is ludicrous. As if the undead spawn of the underworld could rise up and someday come to eat our brains and every other appendage that comes their way… not counting anyone on VH1 or MTV of course.

I have prided myself on becoming a pioneer in the study of Zombiology. In my free time, in the confines of my nonjudgmental walls, I have taken it upon myself to watch any and every piece of scientific study created by the geniuses of my generation on this subject matter. From Diary of the Dead, Dawn of the Dead, Dance of the Dead, 28 Days Later, 28 Weeks Later, I Am Legend, Zombie Land, Land of the Dead, All Souls Day, House of the Dead 1 & 2, Resident Evil (ALL), Scooby Doo on Zombie Island, Shaun of the Dead, Slither, Thriller, and any and everything zombie-related or ending with “dead,” I have unselfishly researched so that, come Z-Day, I might be the very one to lead the masses to my floating hood-proof vessel of safety. 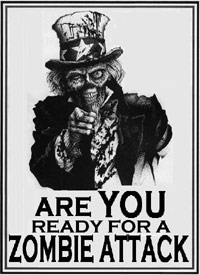 And why did I just document the fact that I haven't gotten out much since college? To prove to you my dedication of course. I know there are more of us, but I find that few are willing to acknowledge their internal preparation. So, in an attempt to single-handedly save humanity, I have compiled a survival list.

But, what makes mine so different from any of the other apocalypse crazies out there, you ask? Well I could break down the subtle intricacies for you, but why not waste a few more minutes of your parents money by not studying and take a gander on down.

1. Head to the most ghetto neighborhood you know.

Logic might suggest you run to the nearest Wally-World, but that is where you are gravely mistaken. Have you ever seen a zombie attempt to take on a street gang? The answer is a resounding NO. It has been proven via countless low budget films that zombies love good ‘ol country alligator-eating folk, and flock to places where, on a typical day, a normal person could easily take out a few of these willy nilly partners. 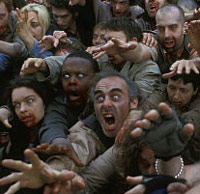 The guy in the back right? Yeah, he just took five bong hits and started roaming with the herd. Nobody had any idea.Yes, again this might sound ludicrous, but have you even seen someone sparkled out of their ever-loving mind? They could very well pass for a zombie, and they have the added benefit of the idiot insurance plan. Have you ever noticed that despite attempting the most idiotic of activities and having only basic functions, most of us usually avoid serious injury while in happy land? It's like a natural defense mechanism that makes the mentally challenged and high impervious to damage. And, on the bright side, when your roommates start playing soccer with the neighbor's head, you will be too out of it to give a sugar honey iced tea.

Yes, I said it. You have my permission to go badass. I mean full on badass… but never full on retard… never that. This may require you, if white, to change race, but it's okay. The zombies have come, and rules no longer apply. Of course there's a bazooka and machine gun in good ‘ol Aunty Lucy's closet and damn skippy you know just how to use it. Just put on a headband and the laws of science go out the door. You'll be like the secret bastard child of Rambo, Rocky, Darkwing Duck, and Captain Planet, all the while having the insatiable desire to shout “I pity the foo!” F Chuck Norris! You got the Juice now, baby!

4. Surround yourself with the socially undesirables: the virgins, the nerds, the lovable losers.

Why? Because they too have that invisible force-field of protection. Life already dealt them a messed up hand by way of incurable sinus infections and constant flatulence, thus earning them the right to survive any and all post-apocalyptic mayhem.

I know I only gave you four (albeit amazing) tips, but alas, I must save some for myself, because if it came down to me vs. you on Z-Day, you better believe I'm going Tina Turner on your ass….