Occupy Wall Street is doing it wrong. I mean, they don't even have one nuclear weapon. Come to think about it, they haven't even used one non-nuclear weapon. There's no way they get taken seriously. Sorry Mom.

How could I possibly sum up the impact Steve Jobs had on our lives? iDon'tknow. 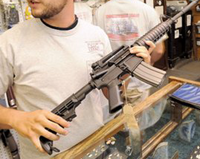 I like going to sporting good stores, asking to see a particular semi-automatic rifle, rubbing it really sexily and saying, "Daddy's back, sugar. Daddy is back." Gun salesmen don't judge. Unlike my neighbors.

People tell me that I'm crazy but that's only because they're jealous psychiatrists. They are jealous that no canned fruit loves them like canned peaches love me. It really is an ugly emotion, jealousy.

A friend of mine met Jesus, described him as the strong silent type, then gave me a hug. He said that Jesus said I needed that embrace and I really didn't know who to thank first, so I Baker Acted him.

I ran out of liquor a while back so I drank an entire bottle of a woman's love. Even metaphorically, it was way too expensive.

My favorite authority is the Sports Authority.

No one ever asks me what it's like to be as smart as I. That's because people are stupid. Also, I fall down a lot.

As more and more wildlife is destroyed by human overpopulation, more and more urban dwellers shoot deer with pellet guns. It would be funny if it wasn't so common.

I never get excited when I see famous people. I never want to meet them or talk to them. I don't really care at all about them because they never give me money. Also, no one is famous for what really matters: like giving me money.

I'm going to invent dishes that wash themselves and give lazy people cancer in the process. I'm all about saving the world, which as near as I can figure out, means killing lots of people.

The more I learn about humanity, the more I want to punch people who complain about popular culture. Also, most baseball announcers do their jobs horrifically.

The best way to end a sentence is with a period.