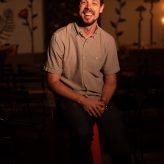 Tony Sykowski is a Brooklyn-based comedian. He has opened for Jacob Williams (Wild ‘N Out) and Anita Wise (The Tonight Show), performed with Second City Theatricals, and helped create and produce both Pipe Up and Waterline Comedy. He has had his writing published on the Second City Network and performed in the Tiny Cupboard Penthouse, Finger Lakes, and Tax Free comedy festivals. He’s also hand modeled for Jim Beam, Canadian Club, and Sauza Tequila — and loves to brag about this to anyone who will listen. Follow him on Instagram @Tonysykowski