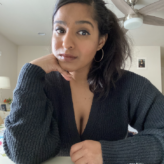 Meg is an Indian-American stand up comedian and writer based in Chicago. As a woman of color she will fill every diversity quota you may so require. Some creds: She was named Chicago Reader’s People to Know in 2016, a StandUp NBC Semi-Finalist in 2017, was a semi-finalist in the Boston Comedy Festival in 2016, featured in the NBC Breakout Comedy Festival in 2019 and in San Francisco Sketchfest in 2020. She performs regularly at Laugh Factory, Zanies, Comedy Bar, and Comedians You Should Know, and is the co-host of podcast Rani Rage Radio, a discourse in discomfort which was featured in Chicago Reader as a “Must Listen” in 2019. Meg has opened for Dulce Sloané, Mike Vecchione, and Steve Rannazzisi. In 2019, she was a writer for a comedic short directed by Natasha Lyonne featuring John Mulaney, Sarah Silverman, Maya Rudolph, Melinda Gates, and more. She is a contributing humor writer to The Hard Times. Outside of comedy, she is an advertising copywriter who has written for brands like Apple, Coca-Cola, and even once wrote for Michael Bublé.

8. The Nephew Whose Whole Thing Is Being Cool: We all went through this phase in high school.

Can We Align on the Intention Behind This Date?

I have noted my standards and policies. These are negotiable due to the extremely low bar I have set due to previous experiences with straight men.