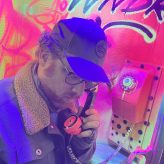 Joshua Del Rey was born under an alias at North Shore Hospital in Skokie, Illinois, during the summer of 1979. He attended UW-Madison for a couple years, failed out, and just barely received a Bachelor of Arts in English Literature from Florida Atlantic University in 2003, not being aware he had graduated until years later. Del Rey also failed out of an MFA program at Chapman University, sometime in the mid 2000’s. In 2021, Joshua Del Rey was the recipient of grant financing from the Illinois Arts Council. Joshua Del Rey’s debut story collection, BANNED BOOK, was released to absolutely zero acclaim on Memorial Day of 2022, and has yet to sell one single goddamn copy. Selections from BANNED BOOK have been featured in Adelaide Literary Magazine and in Dab Art’s national exhibition, Art in the Time of Corona, Vol. 2. SlackJaw and Defenestration, among other publications, also feature Del Rey’s work. Joshua Del Rey can be found telling insurmountable stories on YouTube by searching Two Feat Creative and you can troll him on Instagram @twofeatcreative.