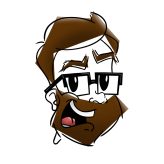 Geoffrey is currently a 2D animator on various comedic film and television projects, including the FXX animated series, ‘Archer’, previously, Marvel's Hit-Monkey, and America: The Motion Picture on Netflix. In his free time, he enjoys writing jokes, humor articles, comedy pitches, and drinking the occasional margarita.

A watched pot may never boil, but a boiled watch makes time a thing of the past.

They say you can’t reinvent the wheel, but what would you call a Lazy Susan?

I guess I’m going to have to be the one to produce the Scarface prequel, Scabface.