It's still possible to find yourself underequipped at some point.

We have long passed the time when our survival depended on our ability to make fire and find drinking water. Progress is quite a nice thing, not without its drawbacks, but it leads to our life being much easier. It happens so that not everyone enjoys the same level of it: while we are on the cusp of sending our first group of settlers to colonize Mars, some indigenous tribes still hunt with bows and wonder what lightning is. They remember how to make fire using the means at hand, which water is safe to drink, and how to place traps to catch critters. None of those skills are particularly useful in our daily lives, but should you find yourself in the middle of the wilderness, they will come in more handy than computer literacy or a second language. The thing is, we don’t find ourselves in situations like this too often. People set off on camping trips packed with every piece of survival equipment they might need. They know exactly where they’re going and usually are never too far from someone who could rescue them. That is hardly a hard-core survival situation that will test your will to live and sift out all incapable of building a shelter with nothing else but a spruce needle. Nonetheless, people get lost in the woods all the time, and sometimes this is the last thing they do. A hunter who got too excited about getting their dream quarry and unwittingly walked miles looking at nothing else but tracks find themselves amidst the trees unknown, the sun already hidden behind the horizon. A person who only traveled from one city to another decides to come out of their comfort zone and gets hopelessly lost discovering that all the trees look kind of the same. The scenarios are numerous, and in every one, there is a risk of not returning. Our hunting store prepared a list of seven basic survival skills that can save your life in the midst of an untamed wilderness.

As a foreword, we need to determine how equipped you are when you get lost. On one hand, it’s not as scary to lose your way when there is a backpack containing a first aid kit, tent, local map, and metal mug. On the other hand, it’s hard to call such a well-equipped traveler a lost one. Even though there are people who were planning to have a camping weekend and ended up somewhere they didn’t expect, as a rule, people who get lost are not prepared to be lost. They don’t have a filter to purify water from a river, they have no matches because they thought they wouldn’t need them, and the same goes for all of the things guides like this mention. The absolute best a random person may have are a pocket knife, since it’s compact, and a lighter, since it’s, well, compact. Some will say that you should be prepared to get lost every time you enter a forest and thus should take things that will help you live through such an experience. For the sake of realism, let’s assume you are underequipped, yet not completely naked, and have a knife and a lighter.

The first thing you’ll need to deal with is not lack of food or water and not even making a fire. It’s panic. Panic from the realization you have no idea where you are, where to go, and how to survive this. Uncertainty is rarely helpful, and in situations like this, it’s not helpful at all. A thousand thoughts will cross your mind at once. Should you stay in one place so as not to stray even further or go somewhere because you won’t get out by standing still? How far away are you from a familiar spot? What time is it? Are there wolves in this forest? Mental activity is as demanding as physical, and chaotic mental activity is even more so. The precious energy you’ll spend on visualizing all the dying scenarios could be redirected to thinking through the survival plan. Doom-thinking won’t get you anywhere, but the ability to keep a cool head very well might. 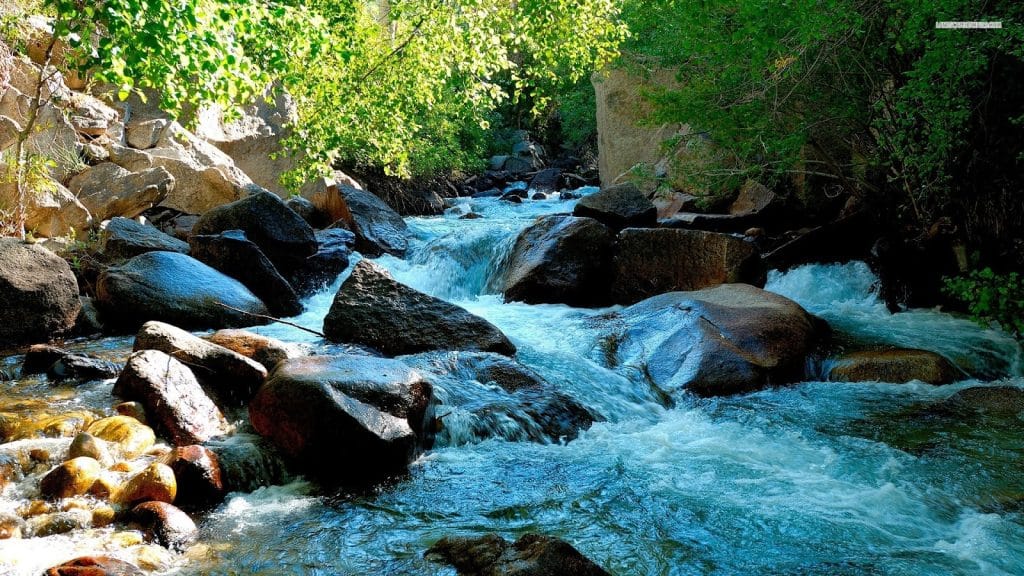 Even if you have a bottle in your backpack (or whatever container you took with you), it will suffice for only so long. You might get out before the thirst turns into an issue, but you also might not. Unless you got lost in a desert, which is a whole new situation, there is a waterbody somewhere in the forest, a running stream or creek, that can be your source of drinking water. We strongly advise you to stay away from stagnant water since it’s a breeding ground for various parasites and bacteria. Your best bet is a water body with strong flow. We also suggest boiling it to eliminate any sickness-inducing impurities contained in the water. Of course, you’ll need fire for that, but we assumed you brought a lighter, so that shouldn’t be that much of a problem. If you don’t have any immediate container to boil water in (even a plastic water bottle will do), look for big, wide leaves, rocks with deepenings or pieces of flexible bark that you can turn into some semblance of a basket. 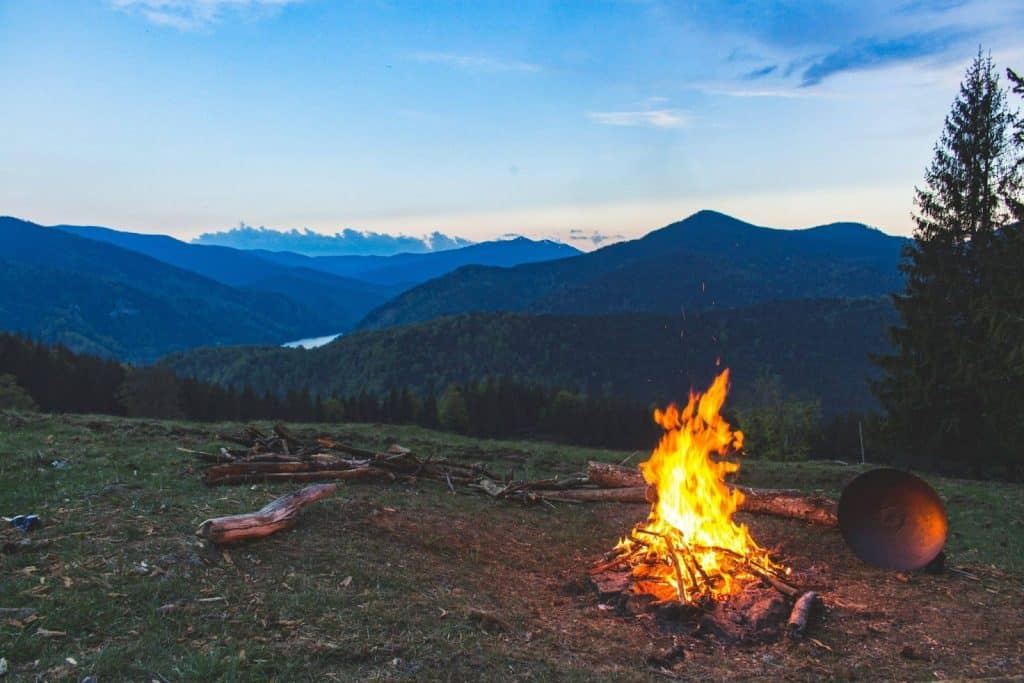 Skill 3. Starting & Tending to a Fire

Even though hypothermia poses a more serious threat than dehydration or starvation, the chances of you dying from it in a night forest are close to zero. The temperature doesn’t drop that low, but nights are nonetheless pretty chilly. The two things you need to replenish energy are a source of energy (food and water) and quality sleep. A campfire, even the smallest one, can help you with both those things. We made the task much easier by assuming you took a lighter with you, but since you won’t need anything bigger than a pocket to store it, the chances are you’ll have it on your person. You can make a habit of taking a lighter with you every time you visit a forest to make sure you won’t one day end up amidst the woods without one. If you don’t have a cheat code in the form of any conventional firestarter, you will need to master the skill that allowed humankind to set foot on the path of progress. Since that is just a concise list of skills you can master and not a practical survival guide, we’ll just redirect you to other numerous dedicated articles and videos.

A lost hunter and a lost someone else are on completely different levels when it comes to finding food. You’ll have a hard time trying to pierce a squirrel with a hand-made spear, and aiming for a bigger game won’t make the situation easier. Besides, pursuing animals is a very energy-demanding task, and there are other things you could spend energy on. If you are a random person and not a survival expert, trapping will also pose quite a challenge for you. It’s a very useful skill to master as it allows you to get the most calorie-rich food in the forest without exerting much effort, but you will need many an hour to memorize their build. There is also only one way to see if they actually work, and for that, you’ll need to make recurring trips to the forest which will eventually turn you from a random person to a forest expert. Our recommendation to mere mortals (ourselves included) is foraging. You won’t get the same physical returns from eating plants and insects, but you won’t spend much energy collecting them either. There is always a risk of coming across something poisonous, so eat only plants you are sure about. You can also check out a list of local edible flora before, you know, getting lost. 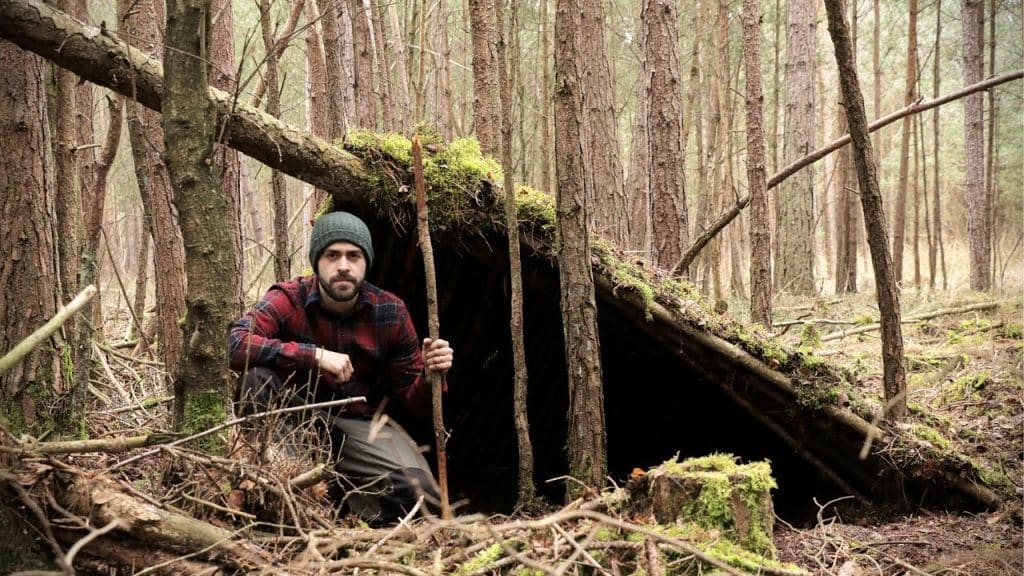 If you have to spend a night in the forest, it’s highly recommended not to do so in the open. It might be windy, it might be rainy, it might be something elsy, but in any case, a semblance of a roof over one’s head is better than no roof at all. Natural caves might look appealing, and they are definitely better than nothing, but the chances are you are not the only living creature who found this place comfortable enough to spend a night. A simple lean-to shelter will do the trick of mitigating the impact of the elements, even if only to a certain degree. Such a shelter looks exactly what it sounds like: building materials leaned up against a wall, rock, fallen tree, or any other similar thing. It doesn’t offer 360-degree protection, but it’s easy to build in a pinch.

It is usually not the best strategy to wait for other people to solve problems for you, but getting lost might be one of the few situations where this is appropriate. Since people won’t automatically know you are in distress, you will need to communicate that. Yelling will help only if there are other people in the vicinity, and while doing so two or three times every once in a while won’t hurt, it’s not the best survival strategy. You need to send a signal visible to rescue or patrol teams that might fly over the forest. You might use smoke signals or make a visual rescue signal from the materials at hand. For the latter, you will need a glade so that the sign is visible from above. The most common signs you can make from logs or whatever are SOS, V (require assistance), and X – (require medical assistance). If materials allow, you can also make Y and N signs for answering Yes and No questions since such answers are less ambiguous than gesturing. By doing so, you make it easier for other people to notice, thus increasing your chances of getting out.

Wilderness survival is not a piece of cake, but it’s not rocket science either. Having a basic command of the survival techniques listed above can help you live through the experience of being lost, and mastering them will turn you from an inexperienced idler to a survival expert.

Related
Everyone Ignored the Warning in My Lyrics, Now “Cotton Eye Joe” is Killing Again
Connor Stodgell
The Millennial and Gen Z Cusp Generation Needs a Name
Steven Peeler
Although I Have Been Dead for Over a Decade, I Still Rise from My Grave Every Fall for a Pumpkin Spice Latte
Lindsay Hameroff
I Know the CEO of This Restaurant Chain is Personally Responsible for the Death of Your Wife But Their Fries are So Good
Lauren Harsh
Resources