Putin's bizarre acts of trying to prove his manliness are highly disturbing.

Okay, I'm going to admit something to you now that might get me quite literally killed: I am highly disturbed by Russian Prime Minister Vladimir Putin's bizarre acts of trying to prove his manliness! There, I said it, so if you never hear from me again please send help, police, SWAT, CIA, hell, maybe you should just send the entire U.S. military.

Is it just me or is Putin not only odd, but also seemingly mental enough to do something really dramatic just to prove that he can? That “out to prove I'm a manly badass” type of attitude is just the kind of thing that starts wars, gets people killed, and causes other pointless acts of mindless destruction in the world. Don't worry, I'm not going to bore you with Russian politics or questionable foreign policy. No, rather, I want to talk about some of the weird ass things that make me cringe in total confusion and give me pause about Putin.

Here are ten things that keep me up at night about Putin and make me want to denounce my partial Russian heritage. Yup that's right, you don't get a name like Andrei Nikolai Trostel without some distant blood ties to the motherland. However, even though I do get random phone calls in Russian, stray Russian catalogs, and the occasional dazed and confused misdirected Russian bride at my house, doesn't mean I have any allegiance to Russia, USSR, CCCP, The Soviet Union, The Russian Federation, or whatever the hell it is being called this week…at least no allegiance that can be proven that is.

10. Putin It to the Gymnast 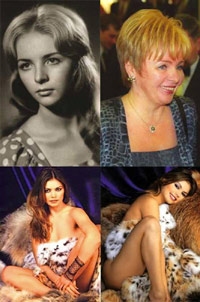 This isn't really a huge shocker or eyebrow raiser but it does demonstrate a typical middle-aged man's need to feel super manly by making poor decision in one's life. Currently, this hasn't been confirmed, but one thing is for sure, Putin definitely wants to come off as the 50-year-old playboy of the Russian world. His desire to become Pimp President/Prime Minister Poontang Putin and to appear all manly in his middle age is definitely not a combination that leads to sound choices. I know that most of you probably won't agree with me that ditching a 50-year-old/flight attendant/linguist/mother of two… for a twentysomething/gymnast/member of parliament/racy model is a poor life decision, but trust me, it's totally a prick move.

9. Putin the Cagey in KGB

I will poison you if you type another P word!

Putin was part of the KGB from the period of 1975-1991, which probably tells you that for the period of 16 years he performed some shit that we aren't supposed to be privy to. During his time in the KGB he monitored foreign people, combated political dissent, posed and paroled as a police officer, was positioned in East Germany, and maintained proper surveillance on the pupils of the Leningrad State University. Needless to say, this person has his privileged secrets and he knows how to preserve them, which is possibly a problem.

8. Putin the Bomb in Bomber

Picture this, Putin the Pilot.

Okay I'm not gonna lie, I would want to take a ride in a jet too if I were president and commander of the military. However, these televised rides in military planes are little more than presidential PR performances that come off as pompous and kind of pathetic. So you rode in a fighter jet and a bomber, does that mean you're any more qualified as a leader? No, all it means is that you care more about your image than spending time doing good for your country. Anyone THAT concerned with their public image of manhood gives me great pause because invariably they end up doing something really stupid just to prove they have the balls to do it. 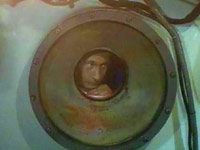 Putin it about a mile down.

Putin dived to the bottom of the world's largest and deepest body of fresh water, Lake Baikal, in a Mir-1 mini-submarine. When asked by journalists whether he intends to visit the International Space Station (ISS) for his next adventure, he told the journalist that he has more things to do in Earth than in space. Seriously Putin, we get it, you want to be seen as a total badass! In reality though, you come off as someone who seriously has something to prove which is precisely why you make me really uncomfortable. Is it just me or does this submarine photo remind you of a comical Monty Python skit or something?

6. Putin on the Hits

Vladimir Putin showed his support on national television for rap music and break dancing while wearing the latest in rap attire: a turtleneck sweater and jacket…not quite Putin on the Ritz! He stood there amongst the young white Russians (no, not the drink) like a freakin' statue in the most uncasual, unhip manner imaginable. He then went on stage to present awards to the participants in “Battle for Respect,” a hip-hop music contest run by Muz TV, a Russian rival to MTV. It's almost too weird to imagine. Fortunately, there's video of it. One word: awkward!

5. Putin It All Out There 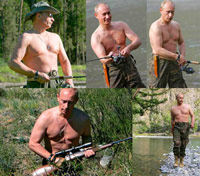 On more than one occasion, Putin made sure the cameras captured him shirtless in all his manly man man-ness. Am I the only one who's eyes burn with pain when I see photos of world leaders with their shirts off? Why do they keep doing these kinds of photo-ops? They certainly don't inspire me to trust their judgment, they only make me question it on multiple levels. Putin, please put away the pointless pecks, you're preposterous!

4. Putin Down a Tiger 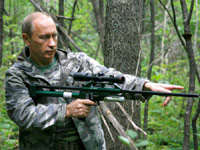 Putin it to another tigress!

While on a visit to a national park to observe how animals are monitored, a rare Ussuri tiger broke free, threatening those in its immediate vicinity. Putin reportedly leapt to action, grabbing a nearby tranquilizer gun (that just happen to be there) and shot the creature before it could maul a television camera crew. Afterward, Putin stroked the animal's cheek, and said, “She'll remember us.” He helped take measurements of the animal and then kissed the big cat while saying “goodbye.” A month later Putin received a baby Ussuri tiger cub as a present for his 56th birthday but he refuses to say who gave him the cub. I swear, I can't make this bullshit up if I tried! 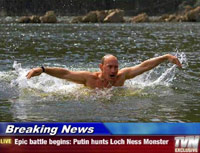 Putin it to Nessie may be messy.

During a trip to Russia's Far East, Putin donned a wet suit and waded into the Pacific Ocean, where he attached a satellite tracking tag to a whale in order to research the whale's migration pattern. Putin patted the whale and said “don't be angry” before helping scientists release her into the sea. Reportedly, his next stop is Loch Ness, where he plans on taking that big bitch Nessie down too!

2. Putin You Down on the Mat 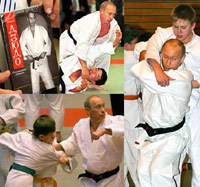 Putin is not only a Judo champion but has released his own judo DVD entitled, Let's Learn Judo with Vladimir Putin. The DVD is the product of a collaboration between Putin (a black belt) and former World and Olympic judo champion Yasuhiro Yamashita. Seriously Obama, you really need to start upping your street cred when faced with the perilous, portentous, pernicious, pestilential Putin! It is still unclear, from the images, whether Putin fights anyone other than children in this DVD, but one thing is for certain: there is nothing more disturbing than images of Putin grappling with young boys.

1. Putin It to a Little Boy 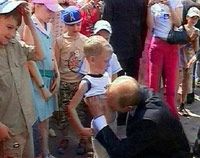 Putin his pucker to a prepubescent!

Actually, I spoke too soon. There IS something more disturbing than Putin grappling with young boys, and that is Putin kissing the bare stomach of a 5-year-old boy. That's right people, in case you somehow missed it, Putin stopped a small boy as he walked through the Kremlin, lifted up his shirt, and kissed his stomach. He later stated that he was prompted by a desire to “touch him like a kitten.” The 5-year-old boy, identified as Nikita Konkin, was clearly stunned by the kiss, and speculation over Putin's motivation caused curious internet users to propel the issue to the top of a list of questions put to Putin in an interactive webcast.

It was an unplanned meeting—people just came up and started talking to me. He seemed very independent and serious. At the same time a child is always defenseless and nice. I tell you honestly, I just wanted to touch him like a kitten and that desire of mine ended in that act. There was nothing behind it.

The media tracked down Nikita and discovered that he had refused to wash after that kiss. Nikita was quoted saying, “I just liked him [Mr. Putin] and he liked me very much. I want to be president myself.” 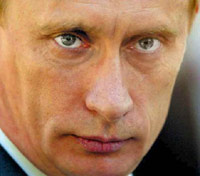 Putin the “P” sound back in Psycho!So you tell me, is this guy off his fucking nut or what? I'm not saying that other world leaders haven't pulled some strange shit in the past, but to me, it just seems that Vladimir Putin is a little bat shit crazy and doesn't mind if the world knows it. Imagine if Barack Obama walked up to a small boy on the street, lifted up his shirt, kissed his bare stomach, and then claimed the reason he did it was his desire to touch him like a kitten. He would be impeached and brought up on charges so fast you'd be able to clock the time it took him to be ejected from office with an egg timer.

One thing is for certain though, I bet a lot of people would pay big money to see a death match cage fight between Vladimir Putin and Chuck Norris. At the very least, you certainly have my cautious attention, Mr. Putin, and suffice it to say, I think you have some much bigger issues to deal with than world politics.

Related
An Excerpt “From the Campaign Trail or Thereabouts”
Michael Bleicher and Andy Newton
I’m Furious About What’s Happening in Our Country But I Have a Doctor’s Appointment On November 6th and Can’t Make it to the Polls
Terry Heyman
Hey, Have You Heard About Sushis?
Noah Tavlin
Resources