If the world were a perfect place, everyone would have a beard. In fact, I believe it is one of the requirements upon entering the pearly gates: Thou shalt grow forth with righteous whisker. Everyone in the Bible has a beard. Wise men have long white beards. And our most esteemed presidents other than the ones who did not have beards, had beards.

If you are one of the sad lot that is unable to grow a beard, I feel your pain. As I too was once 6 years old. What's that? You're 23? WELL THAT'S UNNATURAL! To be quite honest I pity anyone who has not had the experience of growing his very own “face carpet.” Sorry women and Asians.

Now baby-facedom might be appreciated by lovey-dovey make-outey couples, but I'm telling you there is no experience quite like full out bearding it up. Nothing says “THIS IS MY WOMAN” like leaving a huge red, raw swollenness all over her face. And you better believe you should do so, because the animals in the forest where you're chopping down logs need to know she's off limits. 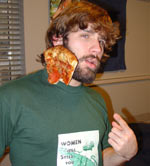 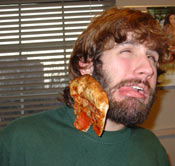 Do I have food caught in my beard?

No don't! I just typed that because it sounds like “Batter Up!” And you're about to step up to home plate in the ballpark that is facial hair for the big game that is growing it out. So let me take you around the bases…and afterwards I'll inform you about some beard basics.

First you have to choose what style you want. Some popular trends include goatees, sideburns, and barely-there stubble. They'll make you look good, but lack the sheer awesomeness of say…the full beard, creepy molestache, and Civil War mutton chops. The less trimming, the better I say. Girls will prefer the previous three choices, but then again they're just suffering from Beard Envy. Tell them to grow a goatee on their own if they like it so much. Then tell them to settle for no make-up and sweatpants, one patty instead of two, and being the lesser of the two sexes. Oh wait she already does! Beard-growers are go-getters, the GROUND is the LIMIT! Facial hair was meant to offend people in the much the same way that a wolf's facial hair offends people… right before they are devoured. So go ahead and let her know that you're not the “chin-fuzz” type. If she leaves, that's fine. She was superficial anyway. Only when you are able to catch a lady with full beardacity should you keep her. Then you will know that she loves you for what's on the inside of your face and not the outside.

Because on the outside is a little bit of that pizza you ate earlier…. No, the other side. There, you got it.

So assuming you've made the decision to grow out the beard, you've got a long way to go. You have to stay strong and stick to your goal because everyone from family to friends to Gillette will tell you to shave. Arguing with your parents is hard, especially when you're three years old. There were times when even I wasn't so sure whether I wanted the beard anymore, but the point is it was MY DREAM and unlike my pacifier, nobody could take that from me. A decade and a half later, I couldn't be happier.

So how do you get all those critics off your back? Well I find that turning the criticism back on the critic is always effective and in no way compensatory. Tell your dad that he's just jealous of your superior face. You might even convince him to grow a beard: 10 recruitment points! Tell your mom that she's just jealous that your dad doesn't have a beard and wants to kiss it: 10 Oedipus points! Tell Gillette that razors are razor sharp make your face ouchy: Mach 10 points! Fight your battles one by one and you will soon be victorious in the war. A war where you must gun down wave after wave of enemies while cramped in your foxhole for days without food, a shower, or a chance to shave. That was just a metaphor don't take it literally.

Except for the not shaving part, that's the whole idea.

Now I realize there is a considerable portion of my audience that will be alienated by this column simply because they cannot grow beards. I express my condolences to you, but perhaps there is a solution besides sulking and shopping at the mall. I happen to know there are single-bearded men out there just waiting for you to be vicariously bearded by dating them. A simpler option involves cutting the bottom inch off your hair and gluing it to your face. Maybe you could… OH WHAT THE HELL I DON'T KNOW! If I was in your shoes I would probably kill myself…with a Gillette razor no less. Okay fine, look…here's a list of things that clean-shaven people do better than bearded people:

Girl: You should really shave that down to a goatee or something.
Mikey: Right and I suppose you'd like me to join a frat too?
Girl: No, I just think it would—
Mikey: While I'm at it why don't I just join the military and get a crew cut!
Girl: Wait, what?
Mikey: I'm off to go fight for freedom… freedom such as the ability to grow beards. Farewell my love!

Bragging about achieving something single-handedly sounds like you only put in half the effort.