I used to get strep throat about once a month. Initially, I figured it was a result of my hoe-ish lip-slutting behavior, so, in a boozed up rampage, I would confront each strep suspect. “You gave me strep throat, you shit-tick havin’ germ stew!” I would holler between wheezing coughs. Men would stare at me, bewildered and embarrassed on my behalf, since I usually had a toilet seat cover hanging out of the back of my hot pants.

After a visit to the real doctor, not the health center doctor, I learned that my tonsils were full of craters, not unlike those on the moon. Strep lives in the craters and could not be destroyed with the antibiotics I was permanently on, consequently causing a permanent yeast infection as well. The only way to eradicate the demon germs was to have the pussing orbs hacked out with a rusty sickle.

So, as it turned out, I was the one giving everyone else strep throat. The old adage, “whoever denied it supplied it,” certainly rang true in this instance.

“I thought Vicodin was a joyous tablet, but morphine showed me what true love really is.”

I had heard many horror stories of the adult tonsillectomy; I was both fearful of the pain and excited about the potential weigh loss. They days went as follows:

The nurse made me get completely nude and wrap myself in an unsightly smock; she then speared my hand with an IV and informed me it was time to get sliced up. I bid a tearful goodbye to my granny panties as I was wheeled into the operating room where a nurse instructed me to slither onto the operating bed. During this process one of my soggy jugs fell out of the armpit of my smock for all the operating room to see, I quickly picked it up off the floor and stuffed it back into my smock. The surgeon asked me to count back from ten.

The next thing I remember was waking up in another room, surgery all done. I laid there in searing pain, and for the life of me I could not close my mouth or stop drooling. It was terrible! Since that day I vowed never to point and laugh at Mike Faerber again!

After an hour or so I was wheeled to my hospital room where Ma and Pa waited with a bounty of gifts, flowers, and praises for my extraordinary bravery. Moments later, a male nurse entered with a dose of morphine and stuck it into my IV.

I thought Vicodin was a joyous tablet, but morphine showed me what true love really is. I could feel the warm fuzzies crawl up my arm and fill my body. And the best part was, all I needed to do was press a button and someone would inject me with more! It was like a tidy, sterile crackhouse with a TV and an attentive helper.

Later in the evening, Sarah, my hetero life mate arrived. We laid in our beds, side by side, and enjoyed the novelty of having English-speaking servants.

I awoke in a saliva ocean and prepared to leave the hospital. A single tear rolled down my cheek as the IV was removed from my hand. I clung to the morphine bag, sobbing hysterically, promising to find a way for us to be together. A beefy, male nurse wheeled me down to Ma’s Volvo and it was off to home base, stopping only briefly so I could barf up a Gatorade/milk/hard boiled egg medley. Delicious!

Upon arriving home, I guzzled a 50-gallon drum of liquid Vicodin, and began oozing into a fabulously warm cocoon. I was zipping around, doing jumping jacks, sweating to the oldies, and shaving my face. I drifted into a glorious slumber and the drooling ensued.

I woke up feeling as if someone had beaten me with a satchel of butt-plugs. My throat was in agony and I was terribly nauseated. I had to lie still like a corpse in freezing temperatures just to keep from purging. So the bad news was, I felt heinous; the good news, however, was the bell Mother got me to ring when I needed things!

Today was much better, as long as I was ingesting a constant stream of liquid Vicodin. Sarah said I stunk like the medicine cabinet of an old person's home. On this day I ate my first solid food and invented the Liquid Vicodin Margarita. 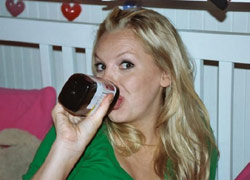 I began to notice a pattern: as long as I continued to swill Vicodin, everything felt fine. I stopped needing it after a week, but continued to drink if for a month—the time it took the doctor to cut me off.

After tonsil surgery, prepare to lay in one place and pass out every few hours for the next 5 days. Any extended period of movement may induce vomiting. You will enjoy a magnificent, narcotic adventure and lots of TV and ice cream. I expected to emerge a waifish supermodel from starvation, but ended up eating as much as possible in order to continue drinking gallons of pain medication without getting nauseous. When all was said and done, I may have lost two repulsive, infected tonsils, but I gained 10 pounds, a drug problem, and an unpleasant new odor. Nothing any hoe-ish lip-slut wouldn’t expect eventually.

I am interested in making my ass completely smooth, with no contours or separation, like sea glass or Costco’s floors.