Case in Point vs. Point in Case

Dissecting the points in case you're curious.

Ever heard the term “case in point”? The term has lost all meaning to me. Sort of like “make your bed” and “brush your teeth.”

Try it: take any classic phrase, twist it around, name a column after it, start a website called it, work on it for 5 years, and then let me know if there isn't something weird about ever using the phrase the “normal” way in public again. I'll be sure to keep my phone on vibrate in 2010.

Either way, the reason I came up with the PIC name in the first place is because I've always had major beef with the term “case in point.” To me, when you are giving an example of some event to bolster a theory, the resulting effect would be the point within that particular case—the case being the specific incident you refer to, and the point being the reason it relates to your initial theory. Thus, the point is enclosed within the case. The opposite would be way too abstract. 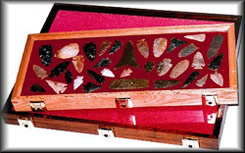 Point in case: An arrowhead displayed in a glass case in the Museum of Natural History. (practical)

Case in point: A glass case in the Museum of Natural History jammed into the tip of an arrowhead. (practical…if you've just dropped acid for the first time)

More to the point, the term “case in point” actually originates from the French term à point, meaning something relevant or to the point. In the 17th century, this resulted in one being able to use the term “in point” by itself to label something as “revelant.” Over a hundred years later, a gaggle of lawyers squabbling over precedents demanded that some cases be produced to prove relevance. Thus, a case in point. Or as some call it, the birth of literary confusion and an over-litigious society.